Since its introduction in 2014, the OM-D E-M10 series has proven itself extremely popular with both amateurs and enthusiast photographers thanks to its attractive design and plethora of advanced features.

Three years on from the release of the original model, Olympus has unveiled the third generation E-M10 mark III but the differences between it and its predecessor, the E-M10 mark II, are not as significant as you would expect. They share the same 16MP sensor and ISO sensitivity (Pull 100, 200-25600 ISO), 5-axis stabilisation system (4Ev of compensation), EVF and rear touch LCD screen. The burst speed is ever so sligthly better on the new camera (8.6fps vs 8.5fps in High mode, 4.5fps vs 4fps in Low mode).

Are there any improvements at all? Fortunately, yes, there are! With the E-M10 III, Olympus has caught up with the competition in some areas such as 4K video, and there are updates to the autofocus system too. Read on to find out more!

Ethics statement: The information supplied in this article is based on official specifications and our personal experience with OM-D cameras. For a complete test of the two cameras side-by-side, check out our full comparison. We were not asked to write anything about these cameras, nor were we provided with any sort of compensation. Within the article, there are affiliate links. If you decided to buy something after clicking the link, we will receive a small commission. To know more about our ethics, you can visit our full disclosure page. Thank you!

One of the major additions is 4K video, making the E-M10 mark III the second Olympus camera capable of recording at this resolution after the flagship E-M1 II. It is available at 24, 25 or 30p with a variable bitrate of 102mbps.

Both models can record in Full HD up to 60fps but the E-M10 III gains better slow motion capabilities at 720p with a maximum of 120fps. To use the same speed on the E-M10 II you need to downsize to VGA resolution (640×480) and the quality is really poor.

The two OM-D cameras allow you to record with manual exposure control. You can apply special Movie Effects or quickly edit a series of short clips in-camera. Another shared feature is 4K Time-lapse: you can create a 4K video file out of various frames shot with the intervalometer. However, the frame rate is limited to 5fps.

There is no microphone input or headphone output on either camera.

The E-M10 III inherits the most advanced image processor from Olympus, the same TruePic VIII introduced on the flagship E-M1 II last year.

The new processor improves the specs of the autofocus (more on this below), adds 4K recording and according to Olympus, enhances the quality in low light. This is the only image quality improvement to be expected and only a side-by-side test will reveal the true differences.

The second important improvement concerns the autofocus. The new OM-D E-M10 mark III uses a contrast detection system just like the E-M10 II but with 121 points instead of 81. More points means that the new camera’s AF covers a wider area of the frame.

The new processor of the E-M10 III introduces a faster algorithm too so overall the AF of the new OM-D should be quicker and more reactive in comparison to its predecessor.

Both cameras come with three focus area modes (All, 9-Group and Single Target), AF Tracking and Face / Eye detection but the smallest single point as well as left/right eye priority settings are not available on the E-M10 III. You can use the touch screen to move the focus point while composing with the EVF via the AF Targeting Pad option.

An unexpected change on the new E-M10 III is the omission of wireless flash capabilities. The Olympus RC mode that can be found on most OM-D and Pen cameras is no longer present, unlike the E-M10 II that can work with 4 channels and 4 groups and uses the built-in flash to trigger other units (optical communication).

The other flash specifications remain the same for both cameras with a maximum sync of 1/250s and compatibility with HSS. The built-in flash has the same GN8.2 power.

Another small improvement concerns the Art Filter: the E-M10 III introduces a new Beach Bypass option, which becomes the 15th filter available in the series. 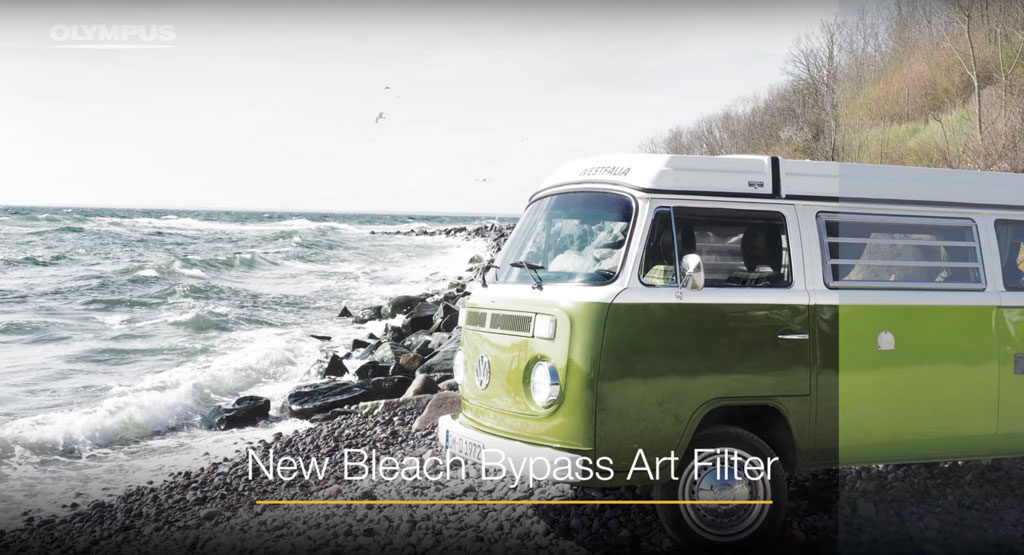 The E-M10 II has 14 filters and my guess is that there will be the possibility to download the new one via firmware update.

Olympus hasn’t drastically altered the successful design of the previous camera but rather has implemented small cosmetic changes to the camera’s curves, buttons and dials. One more relevant difference is the use of plastic rather than metal plates for the top and bottom parts on the E-M10 III.

Both cameras are available in black or silver. As of now only the E-M10 II is available with the limited edition fox brown leather finish.

The new camera is slightly larger than the mark II version (2mm wider and 3mm thicker) and 20g heavier. One of the only relevant changes to the design is the larger front grip on the E-M10 III, which is a welcome improvement and makes the camera more comfortable to hold.

However this means that the optional ECG‑3 landscape grip released with the E-M10 II won’t be compatible with the new camera. Olympus has no plans to make a new version of the external grip anytime soon as they believe that the new design of the mark III should be enough. 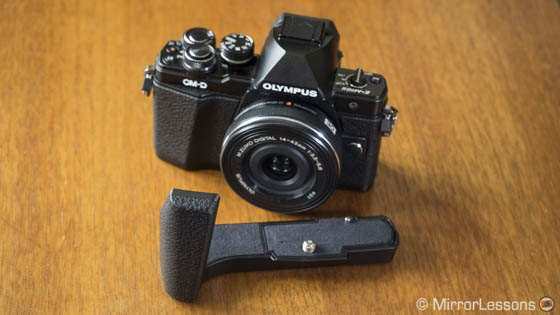 As a consolation prize, there will be a premium leather half case (CS-51B) designed specifically for the E-M10 Mark III. It will be available in black or brown.

The button layout is basically the same and we really need to nitpick to find some small differences. The first thing is that the top dials on the E-M10 III are larger which should improve the user experience.

Olympus has changed the default functions of two buttons on top and the one on the rear thumb rest. Markings have also been added to the 4-way pad on the rear to make everything more straightforward. Unfortunately the new camera has less customisable function buttons (2 vs 6 on the Mk2).

The E-M10 III features a newly designed menu system which resembles the one introduced on the E-M1 mark II but features fewer options in comparison to the flagship camera. The new menu has a minimalistic design and some of the options have been re-organised and are easier to access.

Olympus has also updated the interface of some of the shooting modes to make it more user friendly and intuitive, especially for beginners.

With the new Advanced Photo mode – selectable from the top main dial – you can rapidly access special functions such as Live Composite, Live Bulb, Multiple Exposure, Panorama and various Bracketing modes rather than digging inside the menu.

A new shortcut button on top allows you to select intuitive settings based on the camera mode. You can also use the touch screen to choose the desired option.

The new E-M10 III is priced the same in the US but has a slightly higher price point in Europe at £630 / €660. It is possible that the E-M10 II’s price in the US will come down soon. Both cameras are available with various kit lenses.

The E-M10 mark II is a popular camera and for good reason. It has a beautiful and functional design, packs tons of extra features and is fun to use. The sensor quality isn’t quite as high as others on the market but advanced features like 5-axis stabilisation, Live Composite and Focus Bracketing more than compensate.

It makes sense that the new E-M10 III represents an evolution in design and technology rather than a revolution. Its appearance remains more or less the same if we don’t count the subtle aesthetic updates, and the addition of 4K video places the camera closer to its direct competitors. The new user-friendly interface shows that the brand wants to attract beginners and enthusiast photographers alike.

However, there are also a few downgrades that perhaps weren’t really necessary such as the removal of wireless flash capabilities and the possibility to customise more function buttons.

If you already own an E-M10 II, you probably won’t bother with the upgrade. For a newcomer, however, the E-M10 III looks like an interesting introduction to the OM-D system.

Check price of the Olympus OM-D E-M10 II on