Update: our X-H1 vs X-T2 full comparison is now online!

With every other company in the mirrorless segment releasing models featuring in-body stabilisation, many assumed that it was only a matter of time before Fujifilm followed suit.

Well, it turns out that the predictions were true: the X-H1 is here and it looks like a serious competitor to other IBIS-capable models on the market today.

Now, it would be easy to label the new X-H1 an “X-T2 with stabilisation” but that would be to ignore all the other changes Fujifilm has implemented to improve the user experience. The purpose of this comparison preview is to look at all the differences between the two models to help you find out which is best for your photographic needs. Let’s begin!

What is the same on the two models:

Ethics statement: The information supplied in this article is based upon Fujifilm’s official website, our personal experience with the X-T2 and additional information found via Anthony Thurston and Fujirumors. For a more complete analysis, please go to our full comparison. We were not asked to write anything about these cameras, nor were we provided with any sort of compensation. Within the article, there are affiliate links. If you decided to buy something after clicking the link, we will receive a small commission. To know more about our ethics, you can visit our full disclosure page. Thank you!

The X-H1 is the first Fujifilm X-Series camera to feature 5-axis in-body image stabilisation. It works on its own with non-stabilised lenses or in conjunction with the OIS of XF and XC lenses.

The maximum compensation is 5Ev (CIPA standards) but the performance can vary depending on the lens you mount. For example Fujifilm claims an increased performance of 5.5Ev with the XF 35mm f1.4 whereas with the XF 18-55mm, it decreases to 3.5Ev.

The camera will adjust the amount of correction between sensor and optical stabilisation depending on how advanced the OIS is. With most lenses, it will use three axes on the sensor (Roll, Y and X) and two on the lens (pitch and yaw). With the most recent 80mm Macro however, it will use 1 axis on the sensor (roll) and the rest on the lens (Y, X, pitch and yaw) because this particular optic features a more complex stabilisation system with two sensors (gyro and acceleration).

With adapted lenses that lack electronic control, three axes will be used (pitch, yaw, roll) and the focal length must be inserted in the menu. Note that if you use the MCEX-11 orMCEX-16 macro extension tubes, it will be limited to 3 axes as well.

One last interesting point is that the X-H1 uses a dual processor to analyse and calculate the necessary adjustments to compensate for camera shake. Fujifilm states that it’s the only camera on the market as of now to use more than a single processor and this should mean works faster. 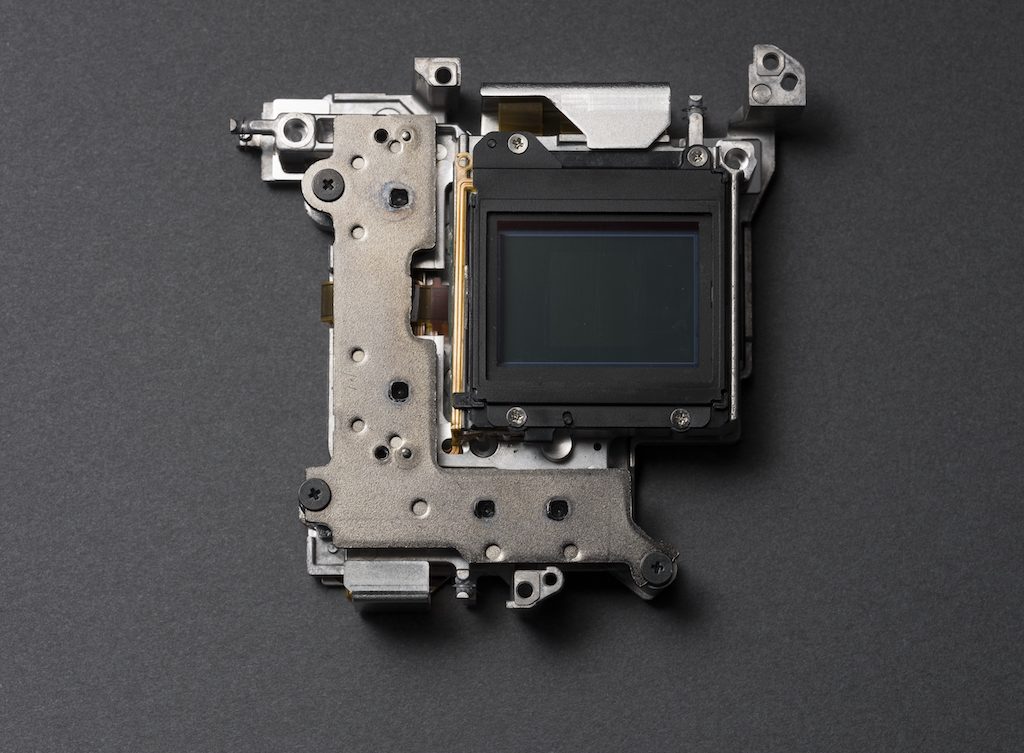 Because the X-T2 lacks in-body stabilisation, you can rely on either the optical stabilisation of Fujinon OIS lenses or a tripod to achieve good results at slow shutter speeds.

The X-H1 is easily the most advanced video camera to come out of Fujifilm’s factory to date.

The X-T2 is capable of recording 4K video but the bitrate is lower at 100Mbps. In Full HD, the frame rate doesn’t go faster than 60fps. Below you can see a 4K compilation we made last year.

Both cameras crop the sensor by 1.17x when recording 4K video.

The X-H1 includes additional features designed for video such as Movie Silent Control, which disables the exposure dials and the aperture ring and lets you make the adjustments by using the touch screen, AF joystick or 4-way pad to avoid any noise produced by the physical dials.

Announced alongside nearly every important new Fujifilm camera is a new Film Simulation Mode, and such is the case for the X-H1.

The new mode is called ETERNA and has been designed specifically for video. It emulates a cinematic look with soft saturation and highlight/shadow tones and provides more flexibility in post production than the other simulation modes. The addition of ETERNA brings the total number of FSMs up to 16.

Below you can watch our video made with the X-H1 and Eterna profile.

Unlike the X-T2, on the X-H1 you can adjust the DR setting for video that allows you to retain more highlights information when recording at ISO 400 or ISO 800.

According to Fujifilm, the combination of ETERNA and DR400% brings the total dynamic range capability to 12 stops and is comparable to F-Log.

Although both cameras featured an OLED electronic viewfinder, that of the X-H1 has a higher resolution of 3.69M dots (versus 2.36M dots on the X-T2). The magnification of the X-T2 EVF is higher however (0.77x versus 0.75x).

Both EVFs have an ultra-short response time of just 0.005 seconds and a maximum frame rate of 100fps, resulting in virtually no lag. The X-H1 has a shorter blackout time of 100ms when used with the electronic first curtain shutter.

The rear LCD remains the same 3-inch type with 1040k dots of resolution and a 3-way tilting mechanism. However, the X-H1’s screen is touch sensitive, meaning that you can move the focus point with your finger or while looking through the EVF.

On top of the X-H1, you’ll also find an additional monochrome LCD display that shows all the most important parameters and just like on the GFX 50s, it can be customised. 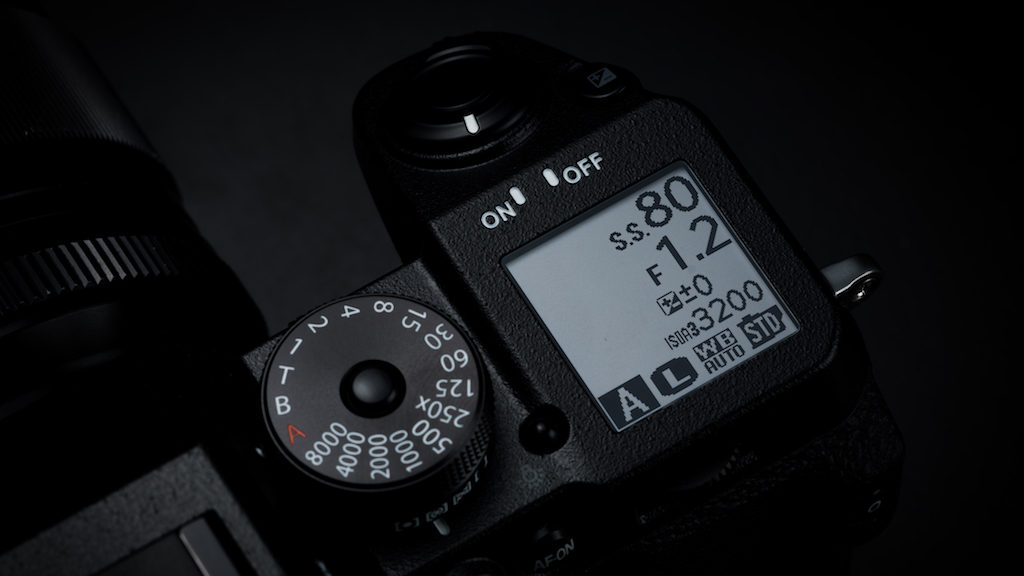 According to Fujiflm, there are 19 physical improvements to the X-H1 body in comparison to the X-T2.

One of the most salient differences is the enlarged grip out front, whose purpose is to make the camera even easier to handle when using large telephoto lenses.

This larger grip is partially responsible for the increase in body size and weight:

The other reason for the extra bulk is the fact that the X-H1’s magnesium alloy chassis is 25% thicker than that of the X-T2. It is also harder and more scratch-resistant. The lens mount has also been strengthened.

The buttons on the rear have been enlarged and the grip of the dials is improved. A new addition is the AF-ON button, via which the autofocus can be activated if using the shutter button isn’t your cup of tea. The shutter release button features a leaf-spring mechanism that makes it more sensitive and smoother to press when recording video.

Both come with a dual SD card slot but only the X-H1 allows for SD relay recording. This means that the camera will continue to record a video to the second card once the first is full.

There is a battery grip available for both models (VPB-XH1 and VPB-XT2) and they are not interchangeable. In addition to boosting the battery life, they also increases the continuous shooting speeds, frame rates, camera response time and recording time in 4K.

The X-H1 becomes the second Fujifilm camera after the medium format GFX to feature an electronic front curtain shutter (EFCS).

The purpose of an EFCS is to reduce, if not eliminate shutter shock produced by the shutter mechanism. It is especially useful for macro or telephoto work, or with image stabilisation when shooting at slow shutter speeds. It also raises the top CL low burst speed to 6fps. (With the mechanical shutter, the CL low burst speed is capped at 5fps on both cameras.)

The X-T2, by contrast, only has two shutter options: the completely electronic shutter and the mechanical shutter.

According to Fujifilm, the X-H1 also boasts a new shutter shock absorption mechanism that minimises camera shake risks to maximise the effect of image stabilisation.

Artificial lights produce varying intensities and wavelengths, which can result in continuous changes in brightness and colour temperature.

To avoid this effect, the X-H1 comes with a Flicker Reduction Mode that keeps the exposure stable during continuous shots even under fluorescent and mercury lighting.

Unlike the X-T2 which only has Wi-Fi, the X-H1 incorporates Bluetooth 4.0 for faster and simpler image transfer to smartphones (iOS or Android). It maintains a constant connection between the camera and your device, and transfers images as you record them without consuming too much battery power.

A small difference worth mentioning is the battery life. According to CIPA standards, the X-T2 can fire off 340 shots on one charge whereas the X-H1 delivers a marginally less impressive result of 310 shots.

When shooting in 4K, the X-H1 lasts for approximately 35 minutes whereas the X-T2 can squeeze in an extra five.

Note that you can greatly extend the battery life of either camera by attaching the optional battery grip.

Reminder: our X-H1 vs X-T2 full comparison is now online!

We often have the tendency to save the most significant difference for the conclusion, which is in this case, the price.

The in-body image stabilisation is certainly the most relevant addition to the X-H1. All the other main mirrorless competitors have it, so Fujifilm needed to catch up.

The larger front grip is a welcome addition for those who shoot sports and wildlife and the added video features may attract more video makers to the Fujifilm system, although competition from Sony and Panasonic in this department is very strong.

But if these features aren’t particularly important to you, it is certainly worth giving the X-T2 due consideration. Despite being nearly two years old, it features the same sensor, autofocus and continuous shooting speeds, and comes with a plethora of desirable characteristics such as weather-sealing and a dual SD card slot.

Check price of the Fujifilm X-H1 on

Enjoyed this article? Then you may also like the following: