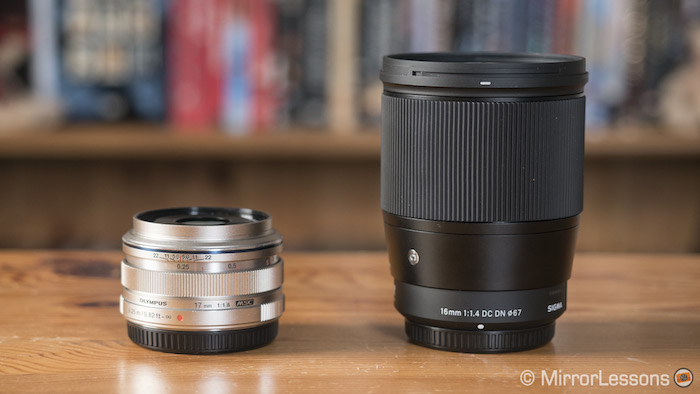 A brand new addition to the mirrorless range of primes is the Sigma 16mm f/1.4 DC DN Contemporary, a wide-angle lens with a bright f/1.4 aperture available for both Sony E and Micro Four Thirds mounts.For Sony APS-C users, it is the first 24mm lens (35mm equivalent) with a bright f/1.4 aperture for the system. In the case of Micro Four Thirds however, it joins an already ample number of bright aperture primes with similar focal lengths such as the Panasonic Leica 15mm f/1.7, Olympus M.Zuiko 17mm f/1.2 Pro and Olympus M.Zuiko 17mm f/1.8.

In this comparison, we’re going to be looking at how this new Sigma prime compares to the Olympus f/1.8 lens given that they fall within a similar price bracket. Let’s get started!

Ethics statement:  We were provided with a sample of the Sigma 16mm and bought the M.Zuiko 17mm for our personal use. We were not asked to write anything about these lenses, nor were we provided with any sort of compensation. Within the article, there are affiliate links. If you buy something after clicking the link, we will receive a small commission. Don’t worry – the price remains the same for you. To know more about our ethics, you can visit our full disclosure page. Thank you!

The Sigma 16mm f/1.4 and Olympus M.Zuiko 17mm f/1.8 are both fast-aperture wide-angle primes. Physically speaking however, they could not be more dissimilar. 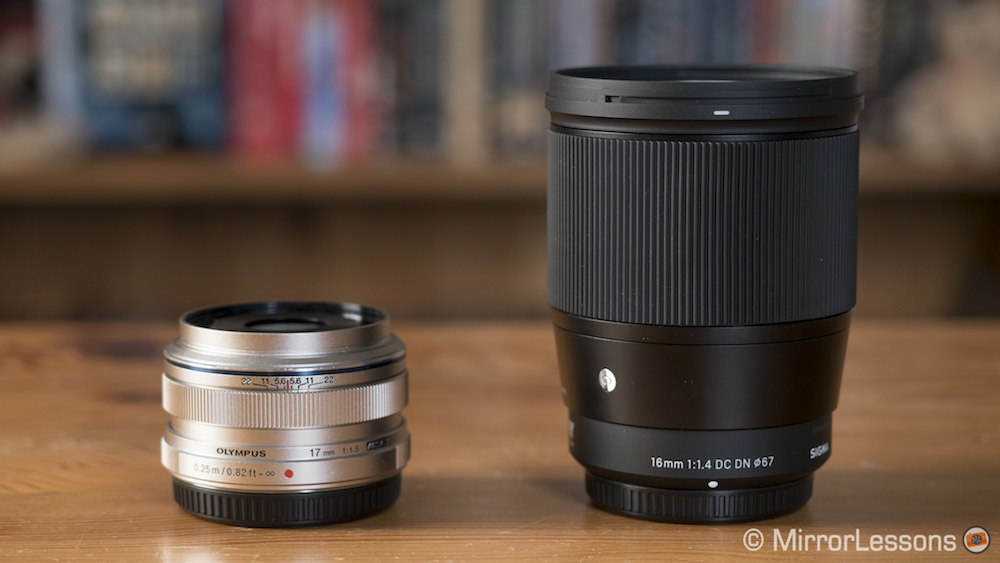 Despite featuring premium-grade all-metal housing, the 17mm lens is nearly four times lighter than the 16mm, with visibly more compact dimensions. Since the Sigma has a faster aperture and has been designed to cover a bigger sensor, it makes sense that it is larger.

For this reason, the Sigma is a much better match for medium to large Micro Four Thirds cameras whereas the Olympus lens can be comfortably used on any body. It comes in either black or silver.

The 16mm is constructed from a mix of plastic, metallic parts, and TSC (Thermally Stable Composite), a material that expands and contracts less in extreme temperatures and offers more elasticity. Had Sigma given the 16mm an all-metal barrel, my guess is that the lens would have been too heavy for most mirrorless cameras, not to mention more expensive. It is currently only available in black. 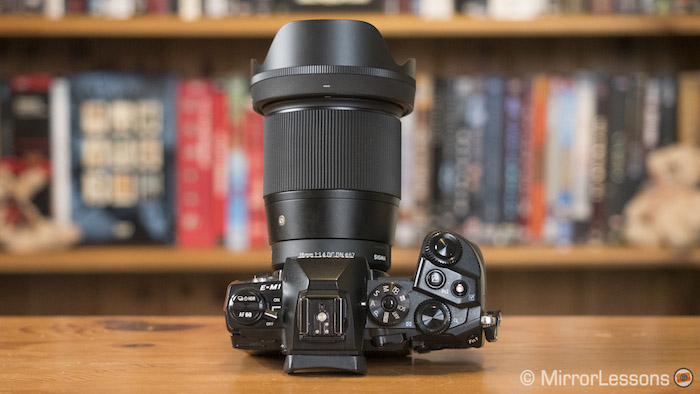 The Sigma lens also features a brass bayonet mount that is surrounded by a special sealing to keep dust and moisture out. The 17mm, by contrast, features no weather sealing whatsoever, so it is wise to protect it in anything more than a very light shower. 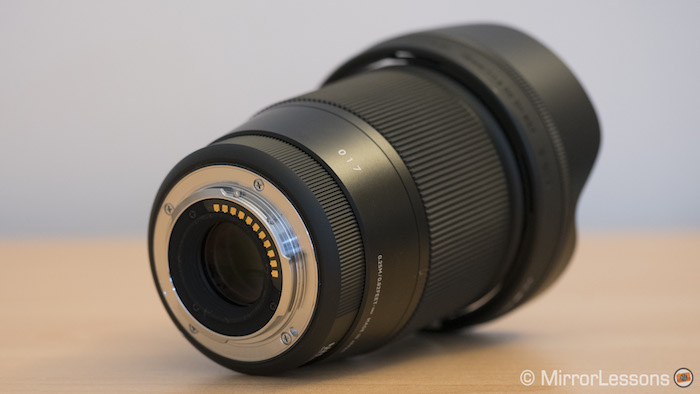 Most of the 16mm’s barrel is occupied by the large fly-by-wire focus ring. The deep ridges give you a good grip on the ring and the fact that it is made of rubber means it is comfortable to grasp even in cold temperatures.

The fly-by-wire focus ring of the 17mm is also ridged but because it is so much smaller, it isn’t quite as easy to manipulate. Unlike the 16mm’s ring, it features a snap mechanism that invokes manual focus when pulled back. In this state, the ring mimics a manual focus ring with hard stops rather than turning indefinitely.

Both lenses feature a filter thread (67mm on the 16mm / 46mm on the 17mm) but neither has a physical aperture ring, so the only way to change the aperture value is via the camera dials. 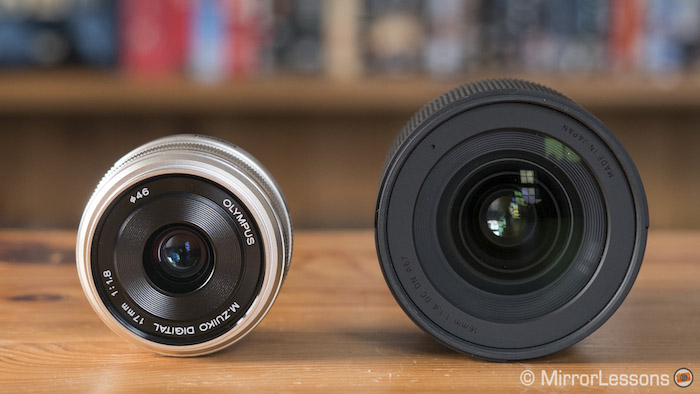 As for the lens hood, the Sigma lens comes bundled with the plastic petal-shaped LH716-01 hood whereas the round LH-48B hood for the 17mm must be bought separately in most cases.

At a long focus distance, the results are what we would expect: the 16mm is slightly wider than the 17mm.

At a close focus distance however, it is interesting to observe that the Sigma has a slightly narrower field of view than the Olympus. This is likely due to focus breathing being more severe on the 16mm.

To begin, let’s take a look at how the two lenses compare at a long focus distance close to infinity.

At their respective maximum apertures (1.4 on the Sigma and 1.8 on the Olympus), the 17mm looks ever so slightly sharper but the difference is barely worth mentioning.

At f/1.8, the Sigma lens gains some contrast but the overall level of sharpness is similar.

From f/2.8 onwards, the results remain very similar through the aperture range.

In the case of both lenses, the best performance is found at f/4 but f/2, f/2.8 and f/5.6 all reach similar levels of sharpness.

The differences become more salient when we turn our attention to the corner performance. At all values, the Sigma is sharper than the Olympus but the biggest difference is found at the fastest aperture values.

It is worth remembering, however, that tested on an APS-C body, the Sigma could potentially perform worse in the corners because the entire lens surface is used. In the case of Micro Four Thirds, the camera uses a more central portion of the lens, thus cutting out the extreme edges and corners which are often soften than the centre of the lens.

As for sharpness at a close distance, the lenses continue to perform in a very similar manner at all values except their fastest apertures where the Olympus is clearly sharper.

As with any fast aperture prime, it is worth looking at the quality of the background blur or “bokeh” as it is more commonly referred to.

Click on the images below to see a larger version.

The differences become even more evident when specular highlights (bokeh balls) are involved. Not only are they larger from the Sigma at f/1.4, but they also assume more of a cat’s eye shape than those of the Olympus lens set to f/1.8.

At these aperture values, the bokeh balls of both lenses display some mild “onion rings” at the centre and some fringing around the edges.

Stopping down to f/1.8 on the Sigma lens puts it on more or less an even playing field with the Olympus, though it does remain a little creamier.

At f/2.8, the bokeh balls of the Sigma lens start to take on the shape of the 9 blade aperture whereas those of the Olympus remain quite round.

When both lenses are set to their shared minimum focus distance of 25cm, the Sigma actually produces a noticeably higher magnification as you can see from the images below.

In the official specifications, Sigma states that the 16mm has a maximum magnification of 1:9.9 (0.1x) but it is unclear whether this is referring to Sony APS-C – the primary system the lens was designed for – or 35mm format. If it is the former, we would expect the magnification to be 0.075x in MFT terms, whereas if it is the latter, it would be 0.05x in MFT terms.

The 17mm is officially listed as having a maximum magnification of 0.08x (MFT) or 0.16x (35mm format), so either way, the specifications go in contrast with the actual results. Here again we can assume that the higher magnification of the Sigma in this real world test is due to more pronounced focus breathing when focusing at the shortest focus distance.

Chromatic aberration is a weak point of the Sigma lens, appearing in the form of purple fringing up until f/5.6. That said, it can easily be removed in post production with the dedicated correction tool.

The 17mm is also susceptible but it usually disappears by f/4 as you can see in the examples below.

Vignetting is an effect whereby the corners appear darker than the centre of the image, and is quite common to fast-aperture wide-angle primes such as the 16mm and 17mm.

In the case of both lenses, vignetting is quite visible at the fastest aperture but greatly improves by f/4.

All Micro Four Thirds lenses with electronic contacts are corrected for distortion on Olympus and Panasonic bodies, so you won’t notice any relevant distortion in your images unless you intentionally disable the lens profile in a software program. What’s more, the 16mm digitally corrects for optical distortion using Sigma’s latest technologies.

In my tests, I found both lenses surprisingly resistant to flare and ghosting, which is testament to the effectiveness of the Sigma’s Super Multi-Layer Coating and the Olympus’ ZERO coating. When it does appear, the Sigma usually produces green polygonal shapes, whereas the Olympus generates small blue and green orbs.

While testing the Sigma 16mm and M.Zuiko 17mm on the Olympus OM-D E-M1 and Panasonic Lumix GX80, we never encountered any issues with the autofocus performance of either lens.

Both incorporate an internal focus unit, driven by an internal stepping motor on the Sigma and a linear motor on the Olympus, allowing for quick, accurate, smooth and silent performance for stills and video. Also found on the Olympus is Movie and Still Compatible (MSC) autofocus technology, which further improves the speed and accuracy of the autofocus.

As mentioned in the design section, the 16mm utilises a pure fly-by-wire focus mechanism for manual focus. The ring turns indefinitely, meaning that the speed at which you turn it affects how quickly you travel from infinity to the minimum focus distance. Overall, I found it very accurate and comfortable to use. 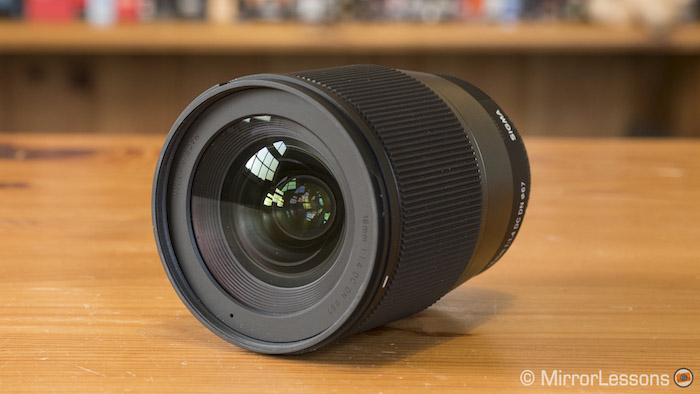 When the focus ring of the 17mm is snapped back into MF mode, it only moves between the focusing limits. This means that the speed at which you turn the ring doesn’t affect how quickly you travel from infinity to the minimum focus distance.

Switch the ring back into AF mode and it turns indefinitely like that of the Sigma, even when the camera set to manual focus in the menu. In this case, the speed at which you turn the ring does influence how long it takes to travel from one extreme to the other. 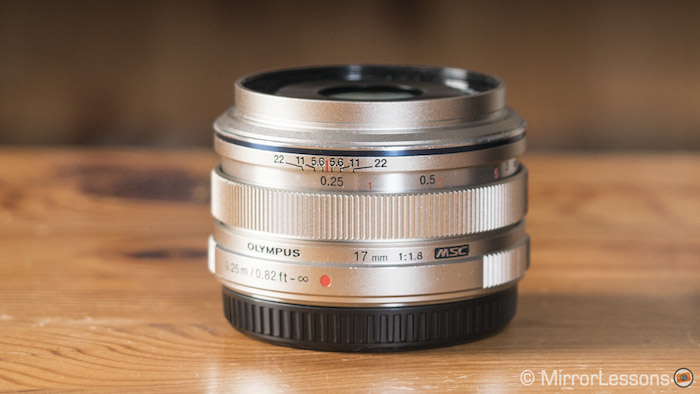 The one thing I do not like about the snap-focus mechanism of the 17mm is that the focusing limits do not actually represent the minimum focus distance or infinity. In fact, they fall short of both by a noticeable amount. For this reason, the snap-ring is only useful if you plan on shooting at mid-range focus distances.

Because the Sigma 16mm and Olympus M.Zuiko 17mm are priced very similarly and have comparable optical characteristics, we need to focus our attention on the other differences that could influence your decision.

If the 17mm has one clear advantage of the 16mm, it is compactness. Not only does it suit any Micro Four Thirds body in the range, from the flagship E-M1 II to the tiny Pen E-PL8, but it doesn’t add any weight to your camera bag. In fact, you could easily decide to throw it in at the last minute without even having to reorganise your gear. The same cannot be said for the 16mm, whose width and length prohibit you from comfortably using it on any body smaller than the Lumix GX80.

The 16mm, on the other hand, definitely provides an advantage for close-up shooting. The f/1.4 aperture helps to produce a softer background blur and it also allows you to get a little closer to your subject despite what the official specifications suggest.

Finally, it is worth considering just how important it is for you to have a focal length as close as possible to the classic 35mm field of view, which is more or less what the 17mm offers with its 34mm equivalent field of view.