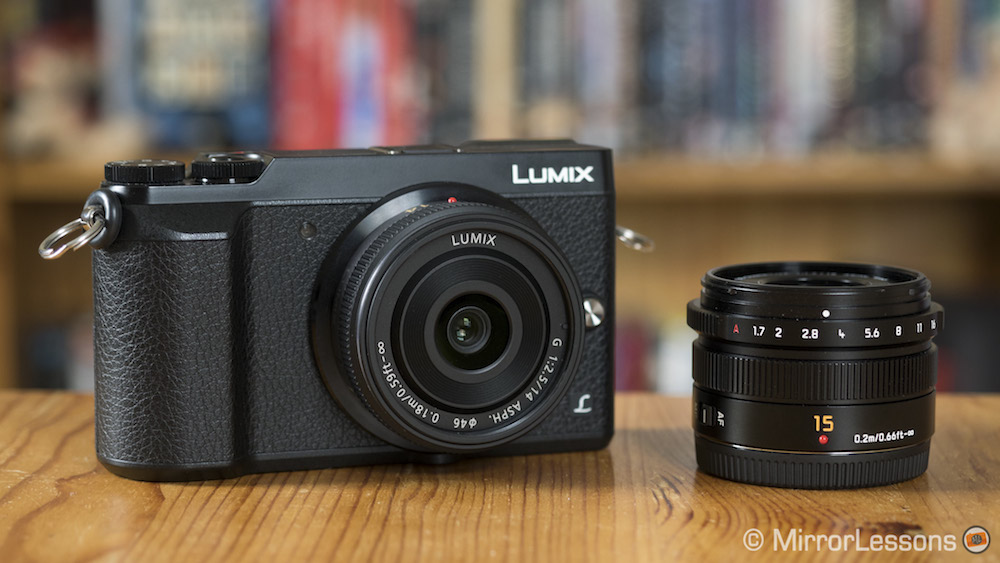 The Lumix G 14mm and Leica DG 15mm are both wide-angle primes from Panasonic. In addition to having a similar field of view, they both offer a relatively bright maximum aperture in a compact lens body. There are, however, quite a few differences that set them apart, starting with the ‘Leica’ designation of the latter and of course, the price. In fact, the 15mm is approximately twice as expensive as the 14mm at the time of writing.

In this comparison, we’re going to be looking at how these two primes compare, and more importantly, whether the 15mm is worth the extra investment. Let’s get started!

Ethics statement:  We were provided with samples of the Panasonic 14mm and 15mm for a three-week loan period. We were not asked to write anything about these lenses, nor were we provided with any sort of compensation. Within the article, there are affiliate links. If you buy something after clicking the link, we will receive a small commission. To know more about our ethics, you can visit our full disclosure page. Thank you!

The build quality of the 14mm and 15mm is one of the most obvious differences between the two lenses. 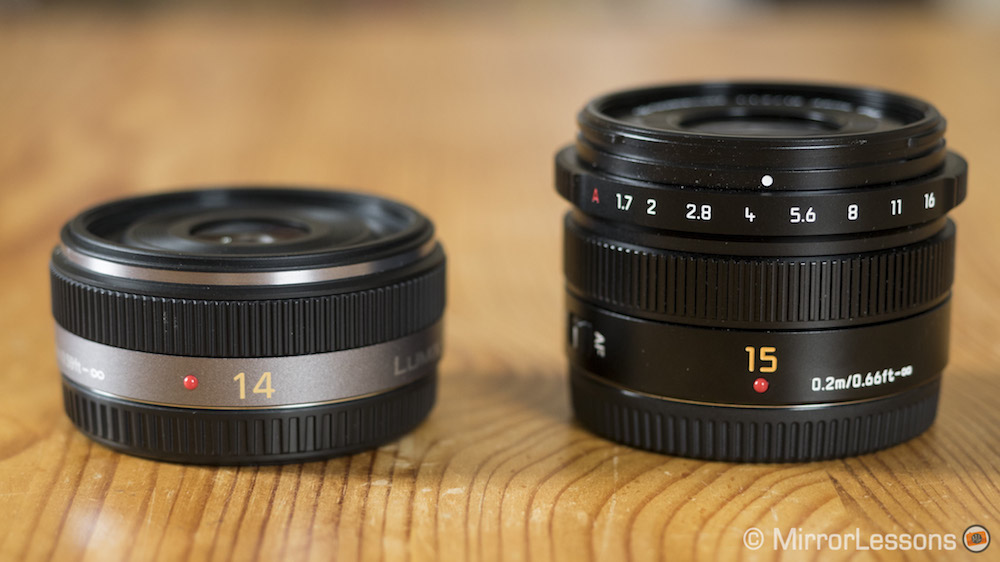 The 15mm, being a Leica branded product, has a high quality metal construction. It features a ribbed manual focus ring that is smooth, responsive and well damped and an AF/MF switch on the side to toggle between focus modes.

Also present is a clicking aperture ring with stops placed at 1/3 intervals between f/1.7 and f/16 and an additional A option for auto aperture control. It is very pleasant to use but it isn’t always easy to tell where f/1.7 ends and A begins, so you might end up switching to one despite intending to activate the other. Also keep in mind that it doesn’t function on Olympus bodies.

The 14mm, on the other hand, features a plastic build and a rubberised ribbed focus ring which occupies most of the barrel. It is a pancake lens in every sense of the word, standing just 20.5mm tall, and lacks the space for an aperture ring. It has a slower maximum aperture of f/2.5 but has an extra step in comparison to the 15mm (f/22). 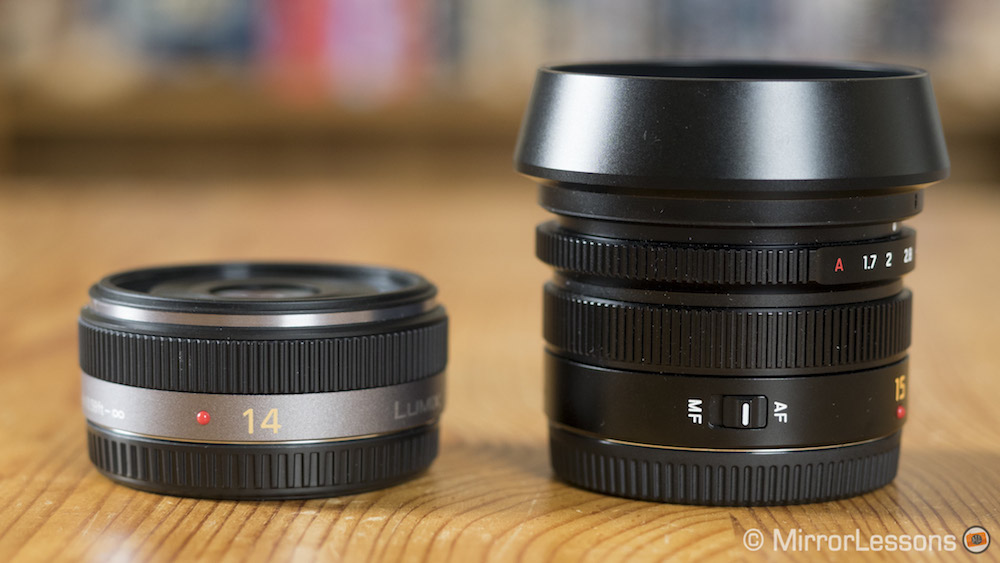 In comparison to many other lenses for the system, both are very compact and light – especially considering their focal lengths and fast maximum apertures – and can easily suit even the smallest of Micro Four Thirds bodies. The 14mm is obviously the smaller and lighter of the two (55g vs 115g) but you won’t really notice a difference once they are mounted on your camera.

Neither lens features any sort of weather sealing, so you’ll want to keep them covered in anything more than a very light drizzle. Both have a 46mm filter thread that does not rotate and a similar minimum focus distance (18cm for the 14mm vs. 20cm for the 15mm). There isn’t any optical stabilisation either, so you’ll get the best results by using them with a stabilised MFT body. 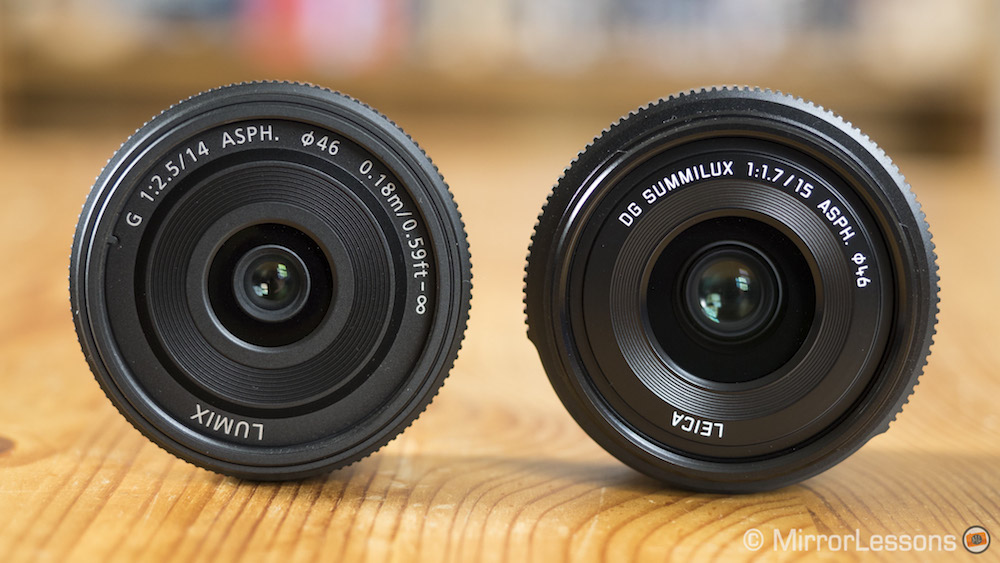 Only the 15mm comes with its own lens hood which, when attached, obviously adds some height to the lens. To attach the hood, you first have to remove the accessory ring from the front of the lens. 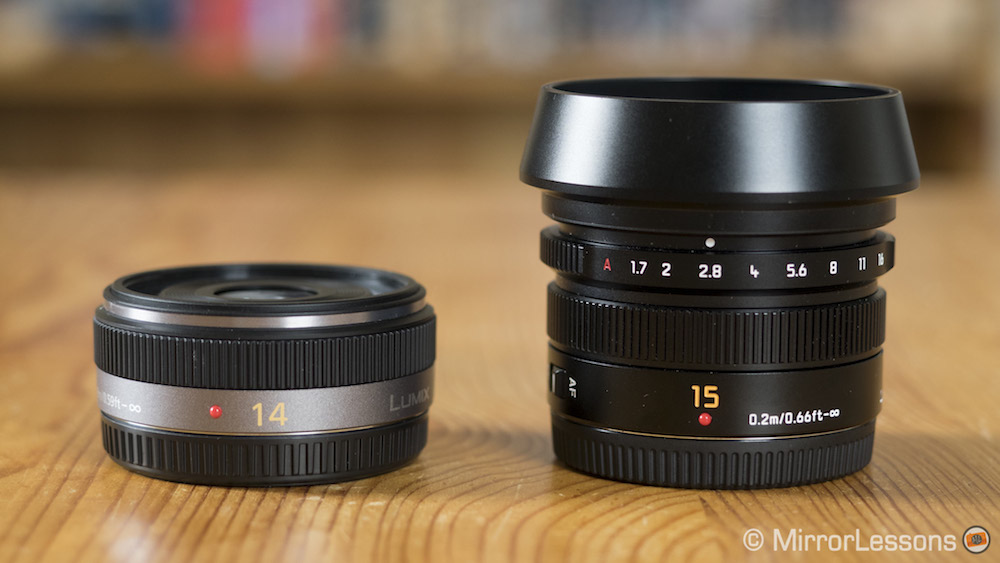 The hood cannot be reversed over the barrel but because it comes with its own rubber cap, it makes sense to leave it mounted and treat it as part of the lens. 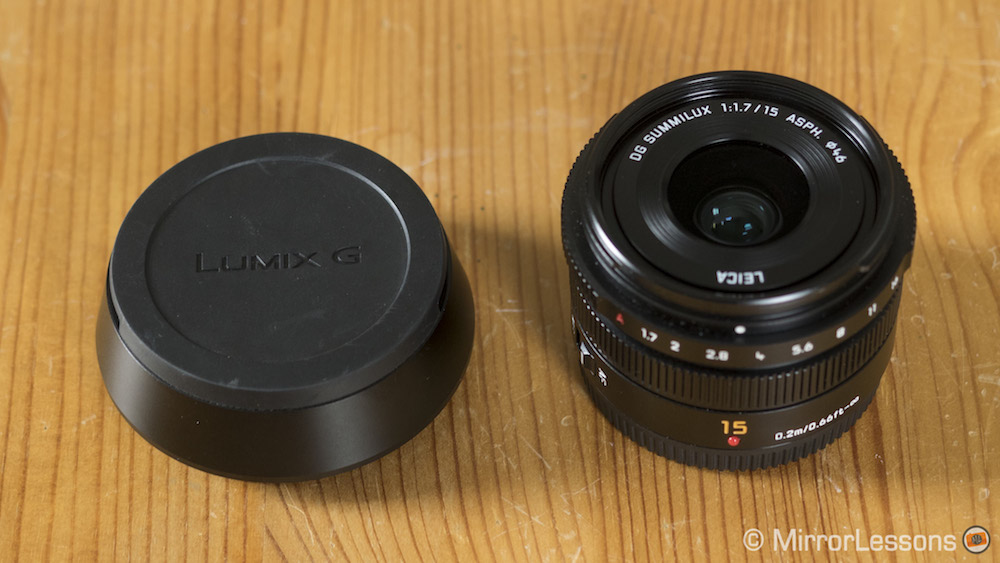 Let’s begin by analysing the performance at a long focus distance.

At their respective fastest apertures (f/1.7 and f/2.5), the two lenses perform in a very similar manner at the centre and this trend continues through the aperture range at all the values they share. The only difference is that the Leica seems to have a little more micro contrast than the Lumix. Peak performance occurs at around f/4 on both lenses but all values from f/2.8 to f/8 are extremely close.

Diffraction begins to show at around f/11 which is normal for Micro Four Thirds lenses. The 15mm only goes up to f/16 while the 14mm has both f/16 and f/22 values, all of which are visibly softer.

While the centre performance is similar, the corners reveal some significant differences between the two lenses. Right from its fastest aperture, the 15mm is consistently sharper than the 14mm, which makes sense given that it is the more expensive product. The only aperture value at which the two look almost identical is f/16.

In this case, we can see that the two lenses perform in a similar way at all but their fastest apertures where the Leica lens is visibly softer than the Lumix.

Getting a pleasant bokeh out of a wide angle prime, though not always easy, is possible if you take advantage of the closest focus distance of the lens, use the fastest aperture and choose a nice background.

In the case of these two Panasonic lenses, it is easier to achieve a shallow depth of field with the 15mm because its maximum aperture is brighter (f/1.7 vs f/2.5). That said, the 14mm has marginally better close focusing capabilities (18cm vs 20cm) so if you photograph the same composition, the character of the background blur isn’t dissimilar.

Both produce round bokeh balls characterised by a subtle ‘onion ring’ effect and in the case of the 15mm, some mild fringing around the edges at f/1.7.

The Leica lens suffers from chromatic aberration at its fastest aperture of f/1.7 across the frame but its performance greatly improves thereon. The Lumix suffers more in the corners at all apertures, with the worst value being f/2.5.

Of course, much of it can be removed from the RAW files in a post production software like Lightroom.

The Micro Four Thirds system utilises software correction for certain types of aberrations including distortion. Because these correction parameters are encoded directly into the RAW file, the native distortion of a lens won’t be visible provided that you use a popular RAW converter such as Lightroom that can convert the files. (Note that these corrections are also applied to the JPGs in-camera.)

For this reason, all you will notice is some subtle barrel distortion when using the two Panasonic lenses in field conditions, which is completely normal for a wide-angle.

As for vignetting, the Lumix lens suffers more than the Leica at their respective fastest apertures. However, it all but disappears by stopping down as you can see from the crops below. Just like distortion and chromatic aberration, it can be dealt with in post production.

Both the 14mm and 15mm are susceptible to flare and ghosting even though the latter has Nano Coating to minimise its effects. Below you can see a few examples I came across during my testing period but keep in mind that I was actively searching for flare for three out of four of these images. You can usually keep it to a minimum by adjusting the composition by a few millimetres, avoiding strong sources of light and in the case of the 15mm, using the supplied lens hood.

Because both lenses have a bright maximum aperture and a fairly wide angle, we also wanted to see how they would perform for astrophotography. Happily, both lenses produce excellent results across the frame. There is some chromatic aberration around the stars but almost no sign of coma or astigmatism.

As mentioned in the design section, the two lenses have a similar minimum focus distance – 18cm on the 14mm and 20cm on the 15mm. Below you can see an example for each lens of how close you can get to your subject.

There isn’t a big difference in field of view between 14mm and 15mm (or 28mm and 30mm in full-frame terms) and for this reason, it shouldn’t be a primary factor when choosing between the two lenses.

I’ve always been satisfied with the speed and accuracy of Micro Four Thirds lenses, and the Lumix 14mm and Leica 15mm are no exception. Despite the Lumix 14mm being one of the older and cheaper lenses for the system, it had no trouble focusing when mounted on either the Lumix GX85 or Olympus OM-D E-M1, the two cameras we used to perform our tests. Both also feature a very silent autofocus mechanism.

As for the manual focusing experience, we found that the fly-by-wire focus rings of both lenses allow you to focus with accuracy when used in conjunction with the manual assists of today’s Micro Four Thirds cameras. The ring of the Leica feels a little smoother than that of Lumix but they both do a good job.

I should also reiterate that the Leica has an advantage in the focusing department: thanks to the small switch on the side, you can rapidly jump back and forth between MF and AF without entering the menu.

In 2014, Panasonic released the mark II version of the 14mm. In addition to being available in all-black or all-silver, the new version now has a slightly faster and more silent AF mechanism, as well as smoother and quieter aperture changes for video.

The mark I version has been discontinued and while we couldn’t get our hands on the mark II version for this article, the good news is that the optical quality is the same.

The 14mm and 15mm, being so light and compact, are both excellent lenses to have in your Micro Four Thirds collection regardless of the size of the camera you own. You could easily pack them inside your camera bag without having to reorganise or remove any of your gear in order to make space for them.

That said, the Leica branded lens definitely has more high-end features on offer, such as the physical aperture ring (though you’ll only be able to take advantage of it on a Panasonic body), AF/MF switch, and better sharpness across the frame. It also has a faster maximum aperture which can be useful in poor light conditions. These features come at a high price, however, as it costs twice the price of the 14mm, so you’ll want to think carefully about how much you’ll use this focal length before making the investment.

Choose the Panasonic Lumix 14mm if you:

Choose the Panasonic Leica 15mm if you:

Check price of the Panasonic Lumix 14mm f/2.5 on

Check price of the Panasonic Lumix 15mm f/1.7 on