Announced in June 2011, the Panasonic Leica 25mm f/1.4 was the first Micro Four Thirds lens to have an equivalent focal length of 50mm (full-frame) and was the second Leica-branded prime from Panasonic. Today, there are a six different 25mm lenses for the system including the recent Lumix 25mm f/1.7, the “cheap and cheerful” alternative to its elitely-named cousin.

My original plan was to do a three-way comparison between these two lenses and Olympus M.Zuiko 25mm f/1.8. Unfortunately, I was unable to get my hands on the M.Zuiko lens in time, so my comparison is limited to the two Panasonic primes.

Ethics statement: This article was originally produced in 2015 for MirrorLessons. Panasonic UK provided us with a sample of the Lumix 25mm f/1.7 to test for three weeks. We bought the Leica 25mm f/1.4 for our own personal use. We were not asked to write anything about the lenses in exchange for the opportunity, nor were we provided with any sort of compensation. Within the article, there are affiliate links. If you buy something after clicking the link, we will receive a small commission. To know more about our ethics, you can visit our full disclosure page. Thank you!

The two primes share the same focal length and angle of view (25mm/47° on Micro Four Thirds which is the same field of view as a 50mm for full-frame) and filter thread (46mm). 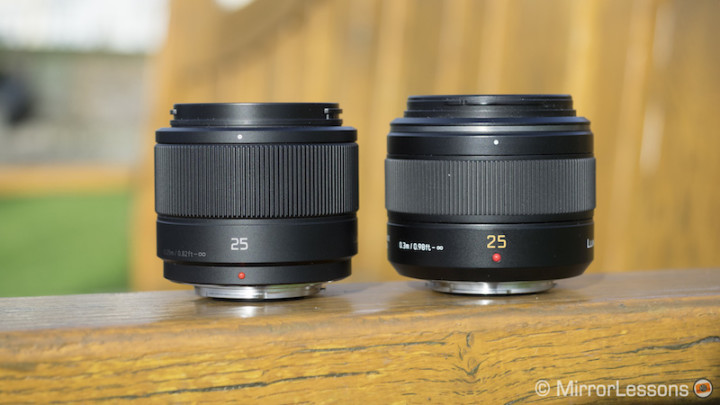 In terms of lens construction, they are nearly identical. They both have two aspherical lenses and one Ultra High Refractive lens. The only difference is that the Leica has 9 elements in 7 groups while the Lumix has 8 elements in 7 groups. Both have a circular aperture diaphragm with 7 diaphragm blades. The Leica has Nano Surface Coating to reduce flares and ghosting while the Lumix does not. 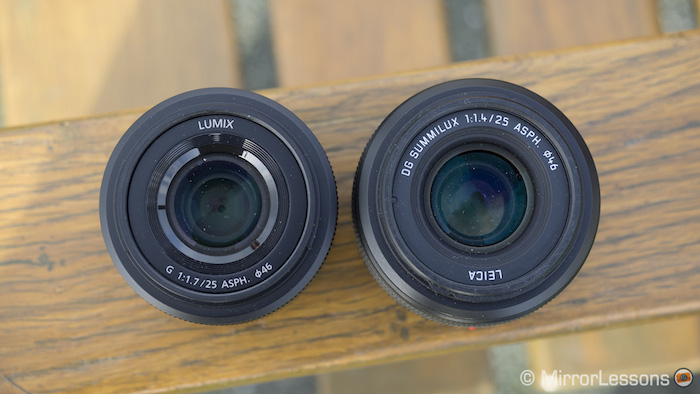 Though neither lens can be classified as large, the Leica is certainly the bigger, heavier and more robust of the two, weighing 200g and measuring 54.5mm in length. It has a chunky rubber focus ring on the barrel and comes with an octagonal lens hood that makes it look larger than it actually is. By contrast, the Lumix weighs 125g, measures 52mm and comes with an inconspicuous round lens hood. Unfortunately neither lens is weather-sealed, so it is important not to expose them to overly inclement weather conditions.

The aperture range of the two lenses also differs. Spanning from f/1.4 to f/16, the Leica lens is faster but lacks the minimum f/22 aperture. The Lumix lens, on the other hand, has a slightly slower maximum aperture of f/1.7 but travels all the way up to f/22.

The Lumix focuses as close as 25cm, just outperforming the Leica whose closest focusing distance is 30cm. Neither lens incorporates built-in optical stabilisation, so you have to rely on the in-body stabilisation of Micro Four Thirds bodies to use slow shutter speeds.

Through the lens – Image quality

It shouldn’t be a surprise to discover that both lenses can produce excellent results but there are a few important differences as we’ll see below.

For my tests, I compared the two lenses by photographing the Commando memorial stone in Penhelig Park (Aberdovey) which was erected in honour of a unique commando troop that consisted of German-speaking war refugees who were billeted in the town.

To test centre sharpness, I placed the memorial in the middle of the frame and used crops of the writing as a point of comparison.

Unsurprisingly, the Leica lens is sharper between f/1.8 and f/8 with the most stark difference occurring at f/4 and f/5.6. However, at their respective fastest apertures – 1.4 on the Leica and 1.7 on the Lumix – they appear to be just as sharp as each another.

After f/11, sharpness gradually gives way to diffraction on both lenses. Although the Leica version only goes up to f/16, it is still quite useable at this aperture. By contrast, the Lumix goes up to f/22 but I would never consider using it because it is quite soft.

Below you can see a series of crops that compare the two lenses at the most important apertures. 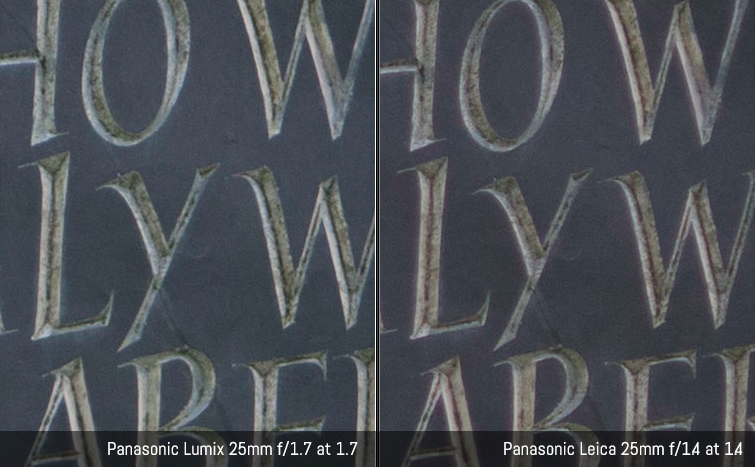 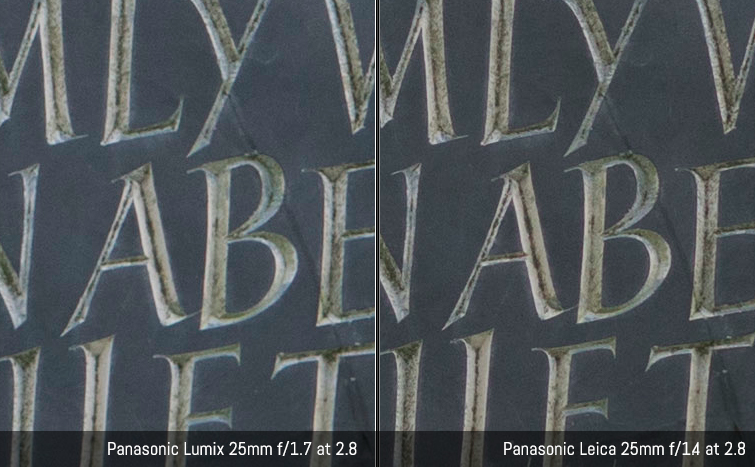 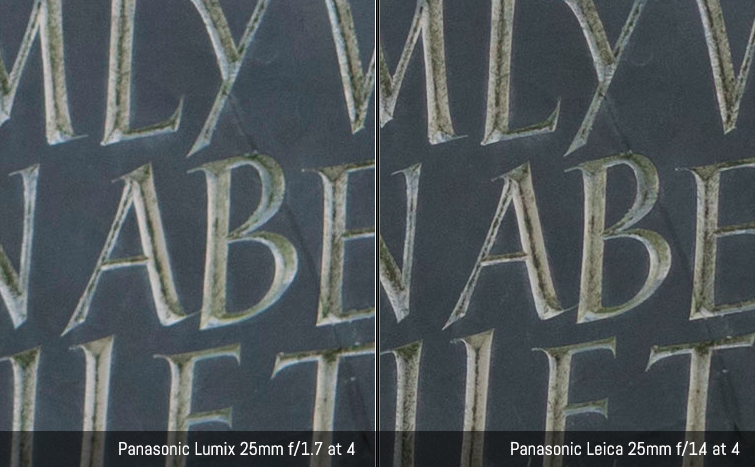 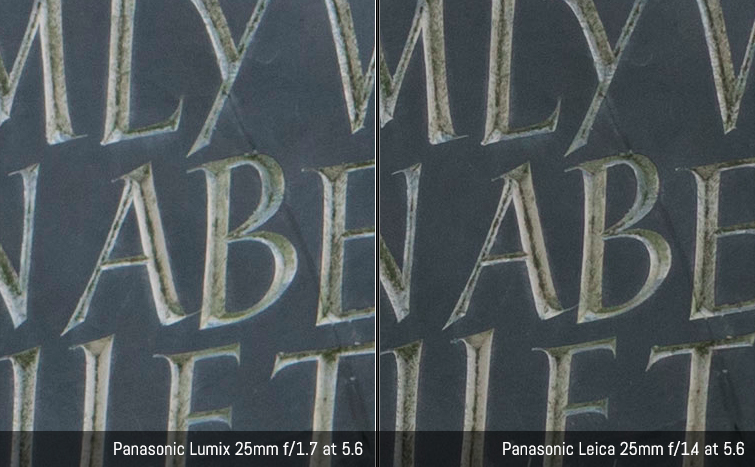 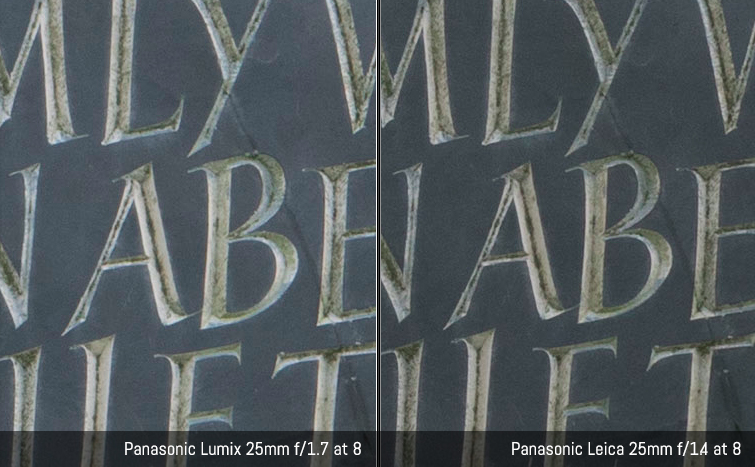 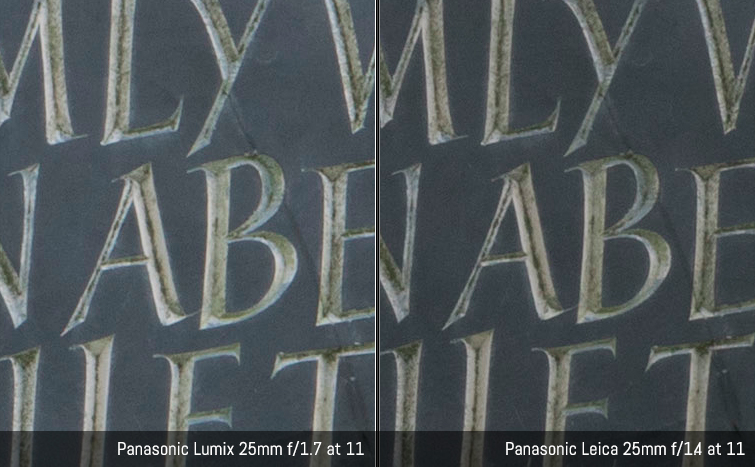 Overall, I was very pleased with the centre sharpness from both lenses, especially at the fastest apertures. I noticed that the Leica tends to peak between f/4 and f/5.6 while the Lumix is strongest between f/5.6 and f/8.

I then tested corner sharpness by placing the memorial in the bottom right corner of the frame.

Both lenses perform in a very similar manner across the aperture range, achieving the best performance between f/4 and f/8. The corners are never quite as sharp as the centre but that is only to be expected. Once again, sharpness decreases once you hit the slowest apertures.

Below you can see a second series of crops that compare the two lenses at the most important apertures. 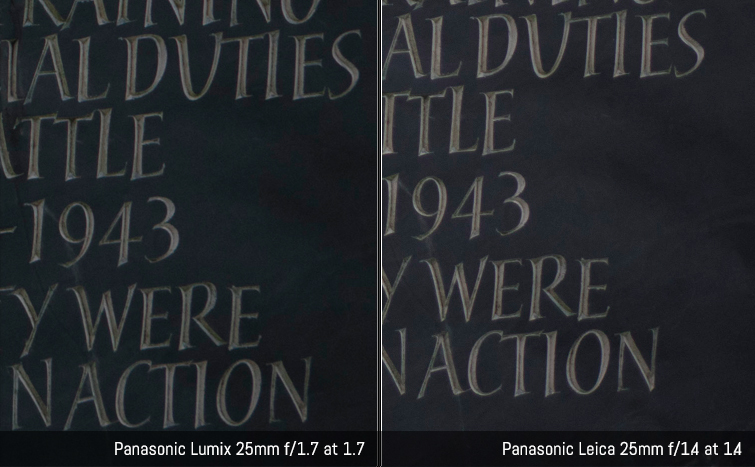 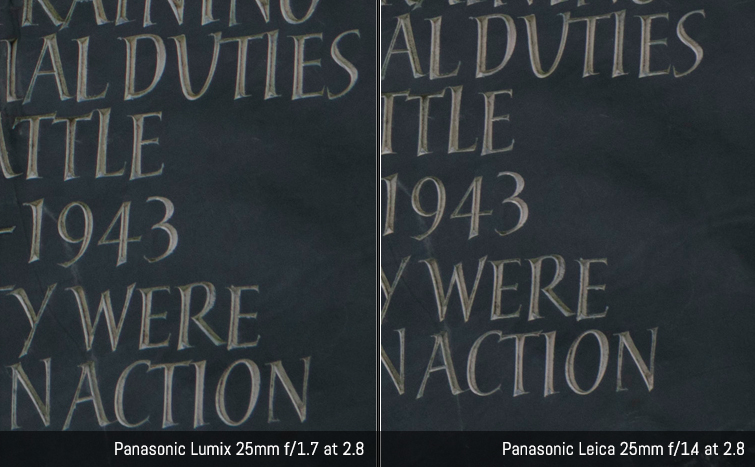 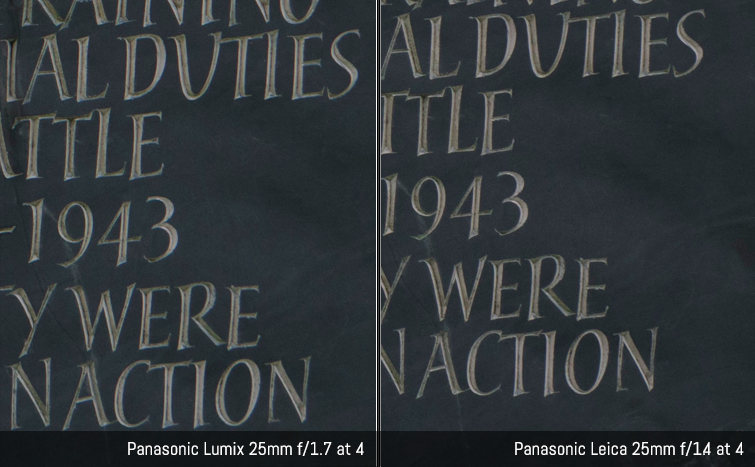 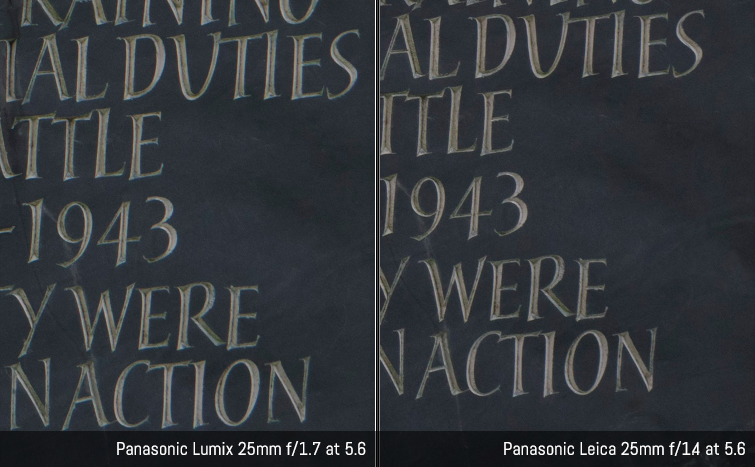 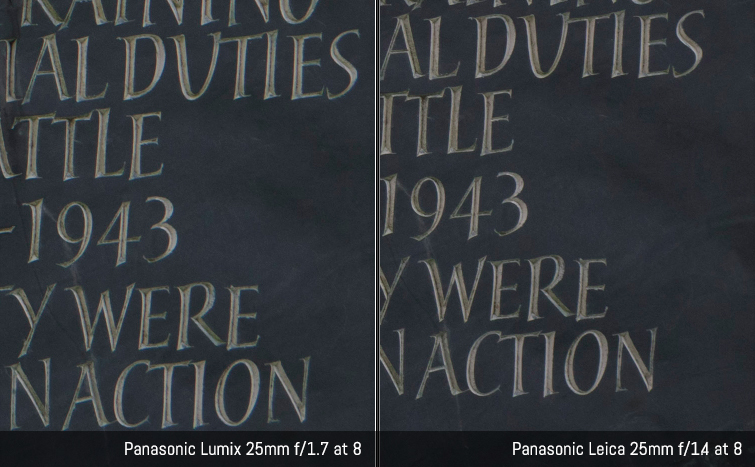 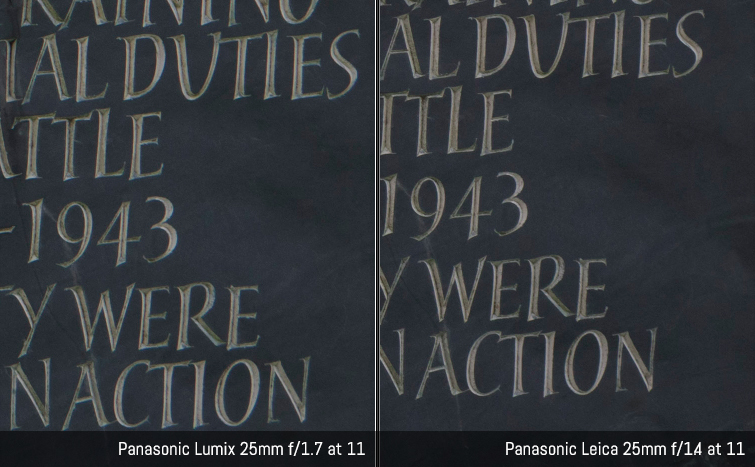 If you compare two images taken at the same distance, I would say that, overall, the Leica’s out of focus rendering is smoother and more controlled. The Lumix can appear more nervous, particularly in places where there is lots of detail or text.

In the example below, I’ve set the lenses to their fastest apertures and cropped the pamphlet in the background to demonstrate the rendering of the bokeh. 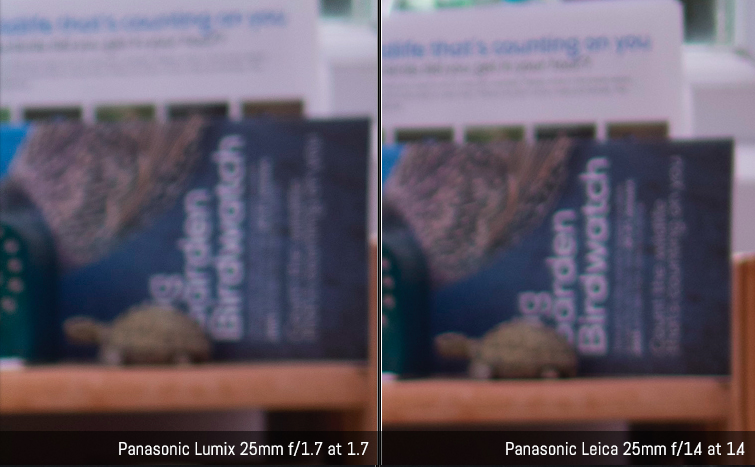 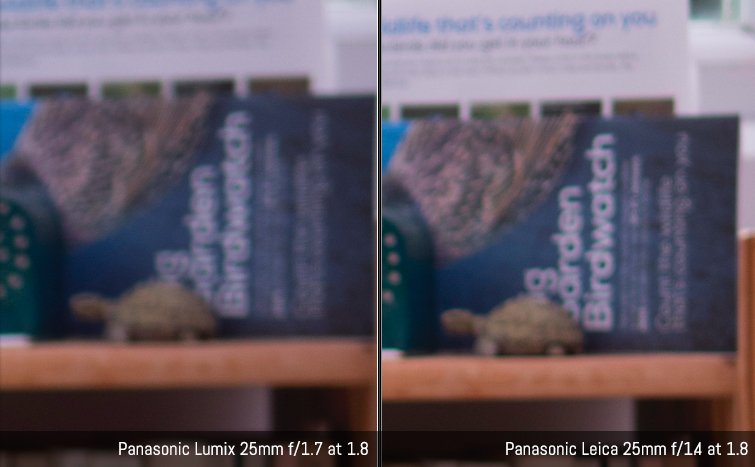 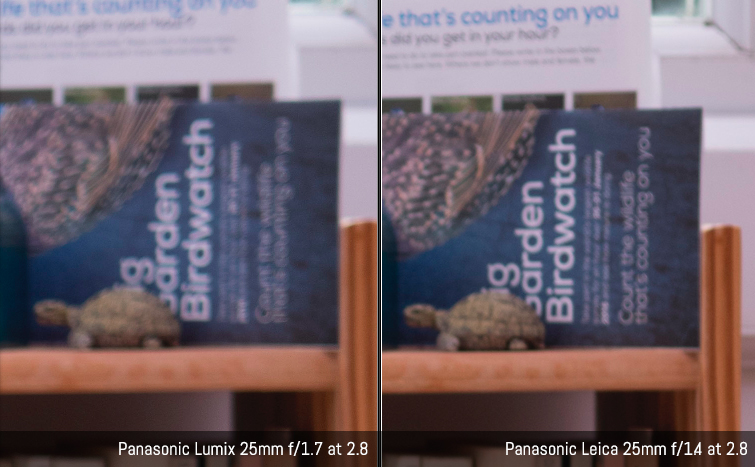 They both produce round bokeh balls thanks to the 7 blade circular aperture but the Leica, with its faster maximum aperture, is capable of producing larger balls that are more pleasing to the eye.

That said, the Lumix is able to focus closer than the Leica – 25cm with 0.14x magnification versus 30cm with 0.11x magnification to be precise – which means you can achieve a more attractive blur just by moving in closer to your subject with the Lumix. The example below of the flowers shows the difference 5cm can make to the smoothness of the background blur.

The very first thing I noticed when comparing the two 25mm lenses is that, despite having the same angle of view on paper, their actual angles of view differs ever so slightly. Comparing two shots taken at the same distance and aperture on the same camera body, you’ll notice that the Leica is marginally wider than the Lumix.

For real world shooting, this difference is irrelevant because it is highly unlikely you’d own both lenses, and even if you did, you wouldn’t spend time comparing them as I have for this article!

Something interesting I noticed almost immediately was that the two lenses produce a marginally different colour rendition. At first, I thought it might have been the fault of the camera choosing a different white balance but after comparing both lenses with the exact same settings, I’ve come to the conclusion that the Leica tends toward a slightly more magenta tint. Fortunately, these differences are of little consequence as you can easily tweak the white balance in post-production if you wish.

Unfortunately, I wasn’t able to take a side-by-side comparison due to it being overcast during most of my testing period, but I can confirm that both lenses flare in situations with a strong light source. The most common type of flare you’ll come across is either a purple haze or a series of polygonal shapes. Having a lens hood helps protect the lenses but it isn’t enough to eliminate flare completely.

As for vignetting, the Lumix seems to suffers the most of the two. At f/1.7, the frame appears one stop darker than at f/2.8. Vignetting is also produced by the Leica lens, mostly at f/1.4 and f/1.6, but I don’t find it as pronounced. Both lenses are practically clear of vignetting by f/4.

Chromatic aberration, on the other hand, appears very well-controlled even at the fastest apertures. I struggled to find evidence of it with either lens, if not in very extreme examples such as shooting the branches of a tree into direct sunlight with a wide aperture.

The Leica lens, being the older of the two, tends to focus a tad slower than the Lumix and makes an unsettling “rattlesnake” noise when it changes apertures. The noise may initially lead you to believe that the lens is malfunctioning but it is, in fact, a well-documented quirk. The Lumix, on the other hand, is fast and deadly silent on all Micro Four Thirds bodies. Both lenses also perform well in poor light conditions.

I had no trouble manual focusing with either lens despite the “fly by wire” mechanism. The Leica’s ring is a little looser than the Lumix’s but it is quite easy to make fine adjustments to focus with both. Since the focus ring is made of plastic on the Lumix and rubber on the Leica, neither is cold to the touch, though the latter does attract some dust. What’s more, both are ribbed, improving the tactile experience of turning the ring.

The Lumix 25mm f/1.7 and Leica 25mm f/1.4 are both valid choices for the Micro Four Thirds photographer who is in the process of building up a collection of primes. As is often the case with these comparisons, whether you choose one or the other really depends on your needs and budget.

In terms of pure optical quality, the prize goes to the Leica but this is logical considering the price difference between the two. Not only is it marginally sharper at all apertures but it also has a slightly more pleasing bokeh and the added bonus of a f/1.4 aperture that performs as well as the Lumix at f/1.7.

However, the Lumix has its own set of surprises up its sleeve. Its focus mechanism is quieter and faster and it has the added benefit of a closer minimum focusing distance. This means that, even though the Leica has a nicer bokeh overall, you can achieve a blurrier background with the Lumix if you focus as close as possible to your subject.

Personally speaking, were I to start my Micro Four Thirds collection all over again, I would probably chose the Lumix version instead of the Leica. (In fact, the primary reason we picked up the Leica is because we found it at a very good price second-hand.) Besides being extremely affordable, it also delivers very good performance and is one of the most compact primes you can find for the system.