Lenses with the equivalent field of view of a 50mm (35mm format reference) are amongst the most popular because they provide a perspective close to natural human vision, or the angle of view of the human eye excluding the shift to the left or right. In addition to daily snapshots and street photography, they also work well for environmental portraits if the aperture is fast enough.

As of late 2016, there are four autofocus lenses for the Micro Four Thirds system that fall into this category. The two we’ll be comparing today have the fastest apertures of the four: the brand new Olympus M.Zuiko 25mm f/1.2 PRO and the Panasonic Leica 25mm f/1.4.

Ethics statement: We purchased the Panasonic Leica 25mm f/1.4 for our own personal use, while the M.Zuiko 25mm f/1.2 PRO was loaned to us for review. We were not asked to write anything about these lenses, nor were we provided any other compensation of any kind. Within the article, there are affiliate links. If you buy something after clicking the link, we will receive a small commission. To know more about our ethics, you can visit our full disclosure page. Thank you!

The first difference worth noting is the size and weight. As you can see from the image above, the Olympus 25mm is nearly twice the height of the Panasonic 25mm, and when you hold both in your hands, you can immediately tell that the Olympus is the heavier, more robust lens. Much of this extra weight is due to its full-metal weatherproof build (the Panasonic is mostly made of hard plastic) and additional lens elements.

Another big difference is that the Olympus lens has more physical controls on the barrel. In addition to a sliding focus ring that lets you switch between auto and manual focus on the fly, it also comes with a customisable L-Fn button to which you can assign various functions. The Panasonic, on the other hand, only comes with a rubber focus ring. Sliding the focus ring down into manual mode also reveals a distance and depth of field scale on the Olympus lens, which is useful for those who enjoy Zone Focusing.

Although both lenses have a fly-by-wire focusing mechanism, the Olympus lens is more precise: its focus rings feels much closer to a mechanical ring, which makes it more enjoyable to use. The ring on the Panasonic is looser and fine-tuning your focus can be more fiddly some situations.

Both lenses come with a filter thread that enable the use of ND filters. The Olympus, being the larger lens, has a larger filter diameter of 62mm while the Panasonic’s is just 46mm. 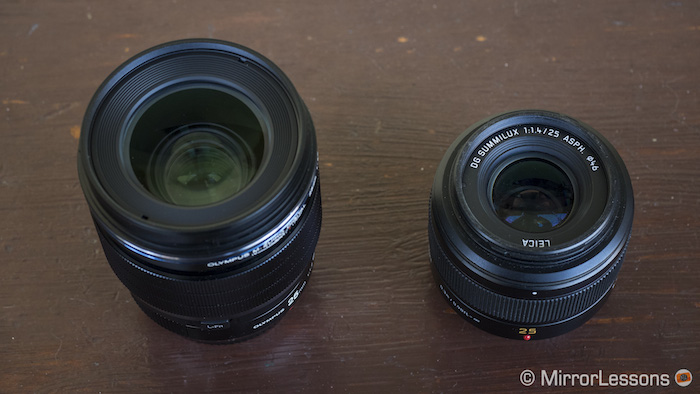 A plastic lens hood is available for both lenses – the LH-66B for the Olympus and the H-X025 for the Panasonic – but they differ in terms of design. That of the Olympus is round like the rest of the lens, has an unlock button and can be reversed over the lens barrel. The Panasonic’s has an octagonal shape and cannot be reversed. We also found it a little too large for the lens. With the help of the Nano Coating on the Panasonic and ZERO coating on the Olympus, both hoods do a very good job of mitigating flare and are long and robust enough to effectively protect the front element. 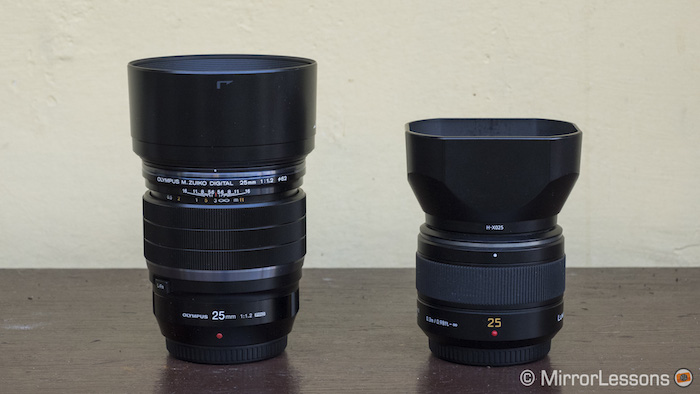 The two lenses have a different internal design: the Olympus has a more complex architecture with 19 elements in 14 groups and 8 special glasses. The Panasonic, on the other hand, has 9 elements in 7 groups with three special elements. In addition, the Olympus lens has a 9 blade aperture mechanism versus the 7 blades of the Pana-Leica lens. You can see the difference in the images below.

Although both lenses are optically stunning in terms of sharpness, the Olympus has a slight edge over the Panasonic, particularly at the fastest apertures. This shouldn’t come as a surprise given that the Olympus is part of the M.Zuiko PRO category of lenses and costs double the price of the Panasonic, which is now five years old. In this first scene taken at infinity focus, it is interesting to note that the Olympus, at both f/1.2 and f/1.4, is slightly sharper than the Panasonic at f/1.4 at the centre.

At f/2, the Olympus continues to outperform the Panasonic.

By f/2.8, the differences become much less evident and by f/5.6, the performance is almost identical.

Between f/8 and f/11, we begin to see signs of diffraction, and at f/16, the results are quite soft. Once again, it is difficult to tell the difference between the two lenses at these slower apertures.

Although both lenses naturally lose some of their sharpness as you move towards the edge of the frame, the Panasonic appears to perform somewhat better at the fastest apertures (between f/1.2 and f/2.8). Beyond f/2.8, the results are very similar.

At a close focus distance, the difference in sharpness is even more conspicuous at the fastest apertures. As you can see in the examples below, the Olympus does an excellent job of highlighting the fine details in the cat’s face even at f/1.2 and f/1.4, while the results from the Panasonic are less defined at f/1.4.

By the time you reach f/4, the Panasonic sharpens up to the point that it is difficult to distinguish it from the Olympus. This trend continues up until their shared slowest aperture of f/16.

(Thanks to Marigold the cat for remaining so still during my test!)

Since the Olympus lens has a slightly faster aperture than the Panasonic-Leica, you can achieve a little more shallow depth of field and a creamier out-of-focus rendering when both lenses are set to the same focus distance. The difference becomes quite clear in the first example, where the specular highlights of the Olympus at f/1.2, in addition to being larger, take on a distinctive “cat’s eye” shape and the needles behind the pinecone are blurred almost beyond recognition. The differences are less evident when both lenses are set to f/1.4, the fastest aperture they share.

Overall, the specular highlights are very similar: both are quite round at the centre but lose their shape as you move towards the edge of the frame. The Panasonic’s seem to display a little more fringing around the edges and some faint onion rings but they keep their shape a little better than those of the Olympus. Looking at the needles in the background once again, it is also clear that the Olympus produces a softer rendering with fewer harsh lines than the Panasonic.

At f/1.8, the results from the two lenses become even more similar, though the rendering of the Olympus remains visibly smoother.

Between f/2 and f/2.8, the specular highlights begin to assume the same shape of the diaphragm: 9 blades on the Olympus and 7 on the Panasonic.

The two lenses produce similar types of flare, including a series of polygonal shapes or the infamous “purple blob” you can often encounter with Micro Four Thirds cameras. Even with the lens hood attached, you may come across examples of flare if you shoot into direct sunlight as you can see below.

Although chromatic aberration is present in images taken with both lenses – up to around f/4 on the Olympus and f/5.6 on the Panasonic – it is more severe on the Panasonic, especially at the fastest apertures. Below you can see a comparison at f/1.4 and f/5.6. The difference is so conspicuous that I don’t even need to show 100% crops.

Both lenses produce some vignetting (also known as corner shading) but the worst of it disappears by f/2.8, and distortion is very well-controlled thanks to the auto-correction performed by Micro Four Thirds camera on the RAW files.

For portraits and events

The 50mm focal length is a classic for portrait work. Head shots are not always a good idea due to the distortion the lenses can produce on a person’s face (unless you are trying to produce a specific effect) but for environmental portraits and events, it can become an inseparable companion.

Mathieu and I decided to use the Olympus and Panasonic lenses on the Olympus OM-D E-M1 / E-M1 II at the Torino Comic-con 2016 where people were dressed up as their favourite animated characters. Though the light conditions weren’t ideal, the fast apertures of the two lenses made it possible to keep our ISO values at 800 and below.

To see how well the two lenses separate the subject from the background, I also performed a few quick tests with Mathieu. The first set features a full-body shot while the second features a half-body shot. As you can see, the Olympus lens is slightly more capable of subject separation thanks to its 1.2 aperture but the difference between 1.2 and 1.4 is not huge.

During our testing period, we used the Olympus and Panasonic lenses on the Olympus OM-D E-M1, Olympus OM-D E-M1 II and the Panasonic Lumix GX85. Regardless of the camera used, we found that the Olympus lenses focused a little faster than the Panasonic for still photography in S-AF and C-AF, which makes sense given its price and the fact that five years separate the two products. The performance of both lenses deteriorates somewhat in poor light conditions or in situations where there is little contrast.

In video mode with C-AF activated, both lenses take more time to switch to a new focus point than they do for still shooting. Of course, the results also depend on the camera you use.

While focusing in S-AF for stills and video, the lens mechanisms of both lenses are audible. That of the Olympus produces a subtle whirring noise, whereas the Panasonic emits a faint clicking noise when you change the focus point. Once you switch over to C-AF, the Panasonic becomes deadly silent.

Given that the Olympus M.Zuiko 25mm f/1.2 costs double the price of the Panasonic Leica 25mm f/1.4, it makes perfect sense that the former outperforms the latter in many ways. Sharpness is better at the fastest apertures, the bokeh is smoother, there are fewer aberrations and the autofocus mechanism is faster and more discreet for stills. What’s more, the build quality is excellent and the lens is easier to use thanks to its precise focus ring, function button and reversible hood.

Price aside, the real advantage of the Panasonic lens can be found in its compactness. Because it is so small, you can easily find space for it inside any camera bag, or even your jacket pocket if you plan to travel light, and it will never weigh you down. You could argue that the Olympus lens is small compared to an equivalent DSLR lens – and you’d be right – but it isn’t the kind of lens you could slip inside your bag or pocket as an afterthought. And although the optical quality is inferior, the capabilities of the Panasonic lens remains excellent and can satisfy your needs in many situations.