Small and portable fast aperture primes are abundant within the Micro Four Thirds lens range, with two of the most alluring being the Panasonic Leica DG Summilux 15mm f/1.7 and the Olympus M.Zuiko 17mm f/1.8 for those who love moderate-wide photography.

The former has what can be considered a unusual focal length since, in Micro Four Thirds terms, it gives you the same field of view as a 30mm designed for 35mm/full frame cameras, placing it between the more popular 28mm and 35mm focal lengths. The latter, with its 34mm field of view, is the closest you’re going to get to a true 35mm equivalent prime, at least within the autofocus selection of MFT lenses.*

In the following article, we’re going to take an in-depth look at how these two lenses compare, both in terms of optical quality and overall handling out in the field.

*As of 2017, there is only one MFT lens whose field of view precisely matches that of a 35mm full frame lens and that’s the manual focus Voigtlander 17.5mm f/0.95.

Ethics statement: We were provided with a sample of the 15mm and bought the 17mm for our personal use. We were not asked to write anything about these cameras, nor were we provided with any sort of compensation. Within the article, there are affiliate links. If you buy something after clicking the link, we will receive a small commission. To know more about our ethics, you can visit our full disclosure page. Thank you!

The Leica 15mm and M.Zuiko 17mm are both tiny, fast aperture primes that suit practically any Micro Four Thirds camera, both large and small. In fact, they are only a little wider than the MFT mount itself as you can see from the picture below.

In terms of size and weight, there is barely a difference between the 15mm and 17mm – the latter is only 5g heavier and the dimensions are all but identical barring the 0.5mm difference in width. Even with their round metal lens hoods attached, the 17mm becomes just slightly longer than the 15mm. 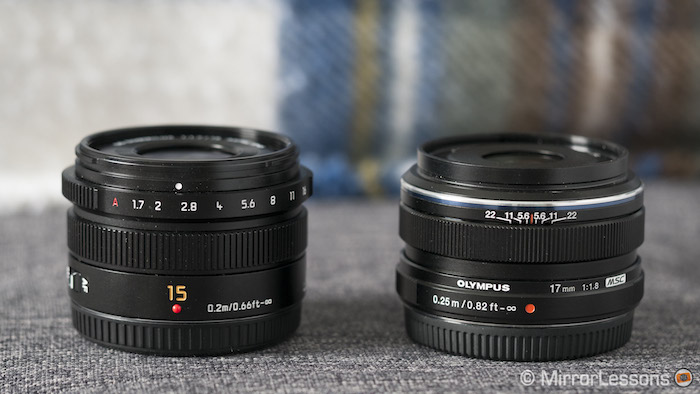 Both have a solid metal construction (albeit without weather-sealing) but only the 15mm has its own clicking aperture ring that turns in 1/3 stops between f/1.7 and f/16. There is also an A (auto) mode that tells the camera to decide the aperture. (Note that the ring only works on Panasonic bodies.) The lack of an aperture ring on the 17mm means that your only option is to change the value by using the control dials on your camera.

Found on the barrel of both lenses is a ridged fly-by-wire focus ring. An advantage of the the 17mm’s ring is that, by pulling it back, you can jump directly into MF mode. Doing so also reveals a handy distance scale that you can use to zone focus. On the 15mm, you’ll find a more conspicuous AF/MF switch to jump between focusing modes. 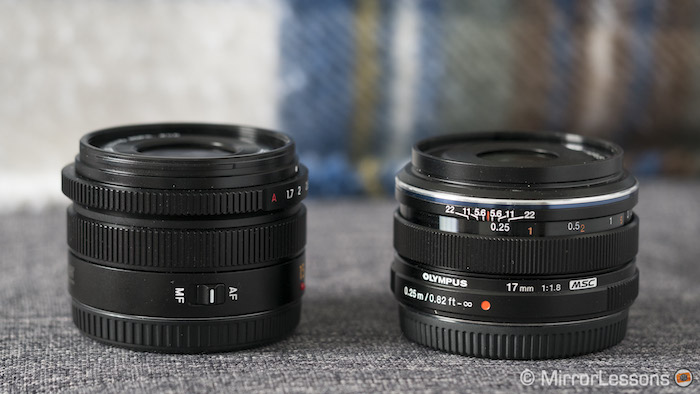 Both solutions work really well, though if you mostly use autofocus and absentmindedly leave either lens in manual focus mode, you might experience the occasional panic attack when you go to autofocus on something and nothing happens!

Coming back to the topic of lens hoods, it is worth mentioning that the 15mm comes packaged with its lens hood whereas the 17mm’s must be bought separately. Another interesting difference is that the 17mm’s hood isn’t a twist-on type like the 15mm’s; rather it slides onto the front of the lens and locks in place via a screw on the side. Both serve their purpose but if you happen to grab the 15mm’s hood while un-mounting the lens from the camera, it can accidentally twist off in your hand. 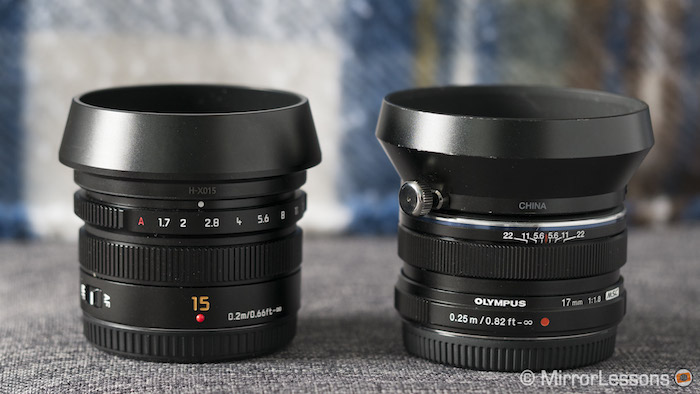 Both lenses have a 46mm filter thread, and therefore accept ND filters, as well as a lens coating to reduce flare and ghosting. 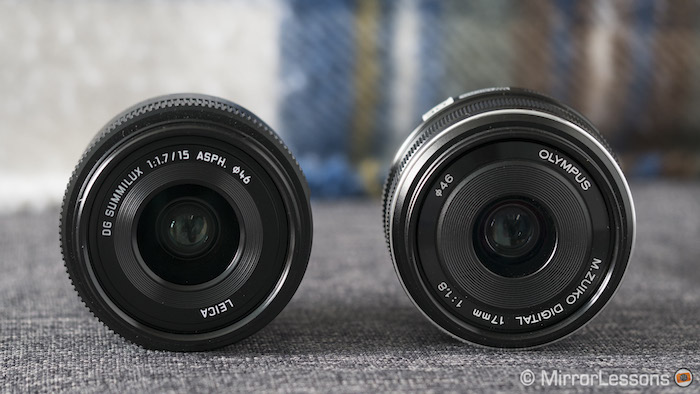 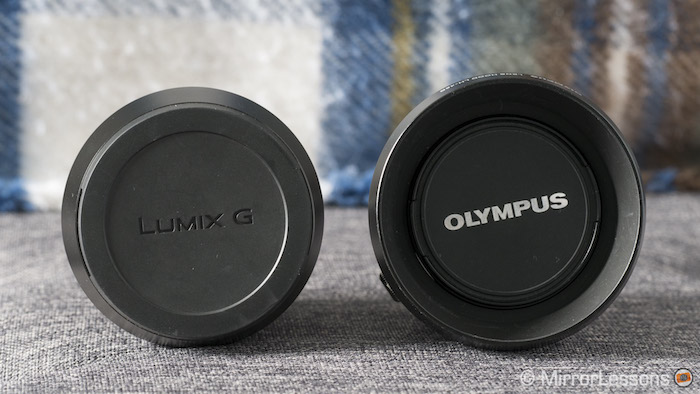 Admittedly the difference isn’t enormous but those looking for a traditional focal length might be put off by the atypical angle of view of the 15mm, which sits between a moderate wide-angle and a normal wide angle. The 17mm, on the other hand, is the closest thing you’re going to find to a 35mm lens within the Micro Four Thirds AF range – at least for the time being!

Below you can see just how much wider the 15mm is than the 17mm. 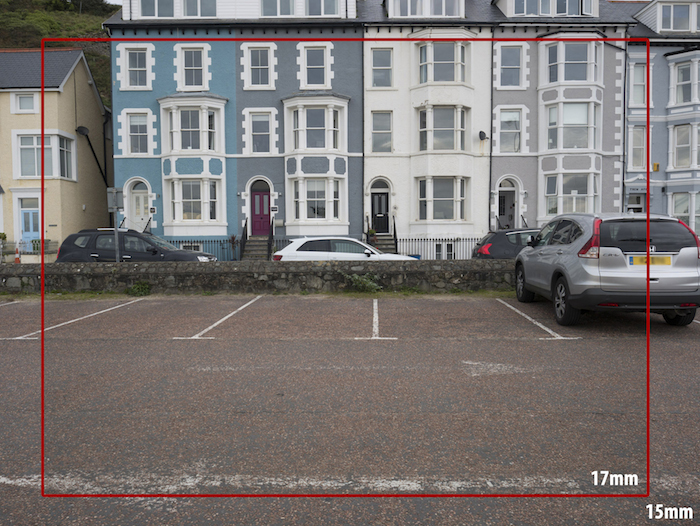 Let’s begin the optical quality section of this comparison by looking at the difference in sharpness between the two lenses.

From their respective maximum apertures to f/2.8, it is clear that the Leica 15mm is sharper than the M.Zuiko 17mm at the centre. The difference is most evident at the fastest aperture values. From f/4 to f/8, the Leica retains a tiny advantage but the difference is more difficult to detect as they look nearly identical.

Peak performance is found between f/2 and f/4 on the Leica lens but f/1.7, f/5.6 and f/8 are all very sharp as well. Diffraction starts to show at f/11 and renders the lens quite soft at its minimum value of f/16.

As for the Olympus lens, the best performance is found at f/4 but f/2.8 and f/5.6 are both very close. The lens’ fastest values of f/1.8 and f/2 are only slightly softer than f/2.8. Diffraction starts to appear at f/11 but only becomes problematic at f/16.

Unsurprisingly the corner sharpness of the Leica 15mm is also much better than the M.Zuiko 17mm up to around f/11 at which the results start to look quite similar. In the case of both lenses, peak performance occurs at around f/5.6.

The performance is particularly weak at the fastest aperture of the 17mm but this matters little since landscapes and architecture aren’t meant to be shot at f/1.8.

At a close focus distance of about 1 meter, the difference in sharpness isn’t quite as apparent but close inspection reveals the Leica’s small lead over the M.Zuiko up to f2.8.

The character of the bokeh of the 15mm and 17mm is actually quite similar and could even be called pleasant if you use the fastest apertures and focus close to your subject.

At 1.7 on the Leica and 1.8 on the M.Zuiko, the circular out of focus areas (bokeh balls) are round at the centre but take on an ovular shape closer to the edges of the frame. The only annoyance is the bokeh fringing produced by both lenses, which is visible even without zooming in 100%.

When stopped down to f/2.8, the bokeh balls become smaller and rounder even at the edges and bokeh fringing becomes less invasive, especially in the case of the Olympus lens.

The 15mm is capable of focusing 5cm closer than the 17mm (20cm vs 25cm), so you can magnify your subject more as you can see from the two images below.

Chromatic aberration is abundant at the fastest apertures of both lenses but becomes much more well controlled once you stop down to f/2.8 on the 15mm or f/4 on the 17mm. The best way to deal with chromatic aberration is to import the RAW files into a post production software such as Lightroom and adjust the slider of the Remove C.A. tool.

Vignetting is an effect whereby the corners appear darker than the centre of the image. It is common to wide-angle lenses such as the 15mm and 17mm, especially at the largest apertures. Below you can see how corner shading improves between their respective maximum aperture values and f/4. 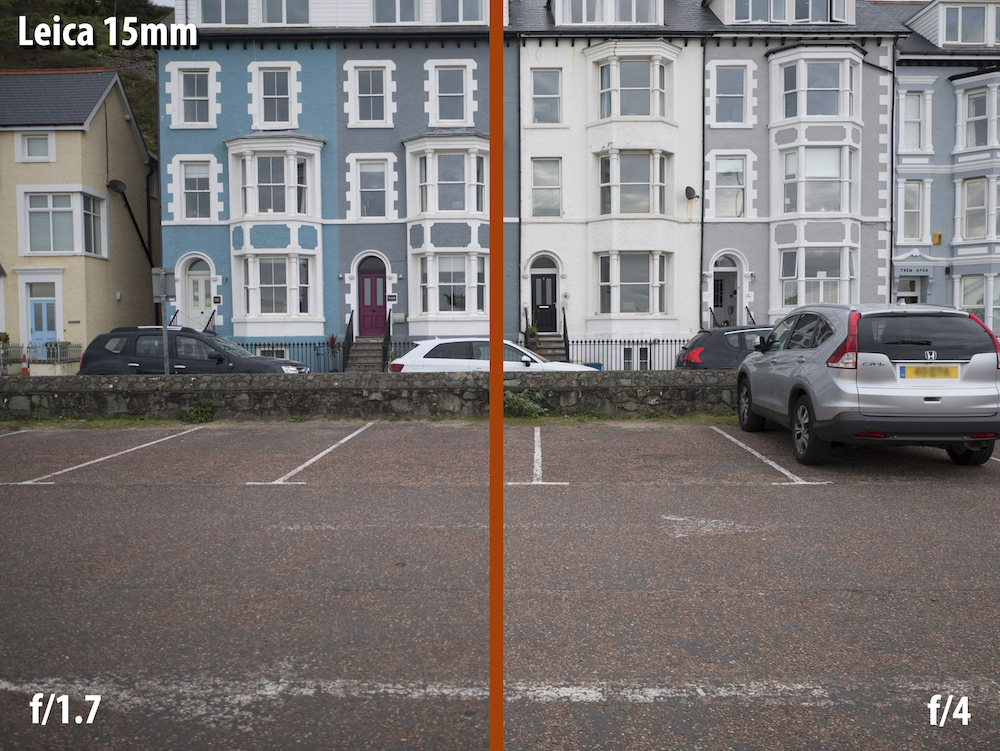 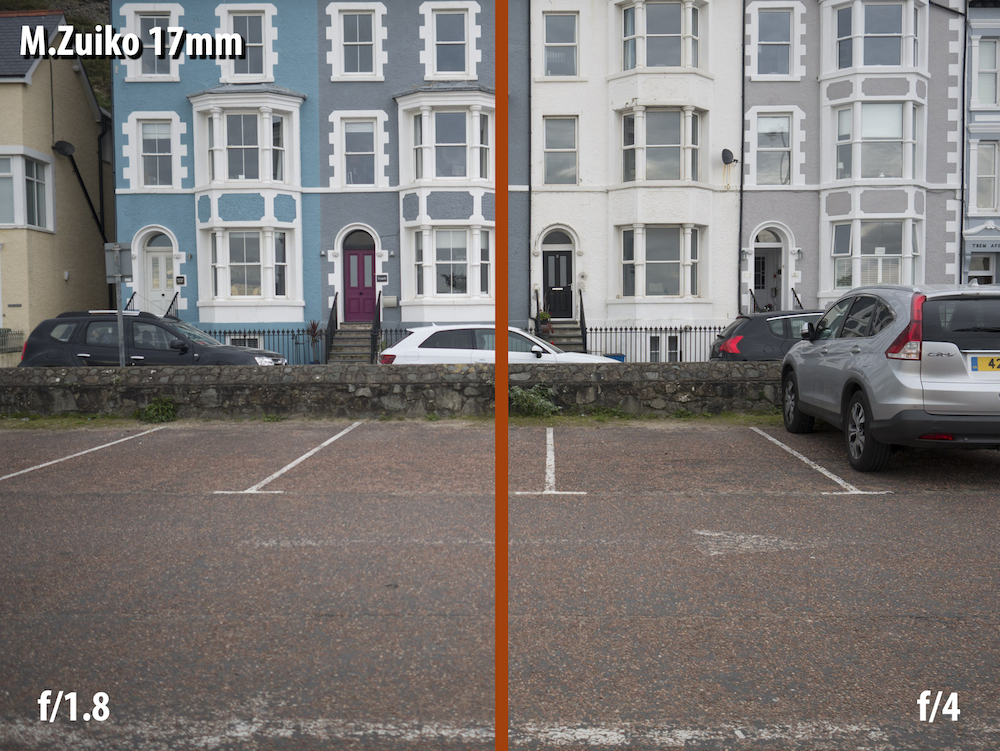 Both Panasonic and Olympus cameras provide vignetting correction for JPGs, called Shading Comp. on the former and Shadow Compensation on the latter, but they have less of an effect on the RAW files. The best solution for RAW shooters is to fix the files in a post production software.

All Micro Four Thirds lenses with electronic contacts are corrected for distortion on Olympus and Panasonic bodies, so you won’t notice any relevant distortion in your images unless you intentionally disable the lens profile in a software. (And trust me, you wouldn’t want to do that because the native distortion of MFT lenses can be quite shocking!)

The flare produced by the 15mm and 17mm is quite mild, which is testament to the effectiveness of the former’s Nano lens coating and the latter’s ZERO coating.

With the 15mm, I came across a mix of purple veiling flare, polygonal shapes and bright streaks mostly at the smallest apertures whereas with the 17mm, small blue or green orbs were the norm. Either way, I didn’t find flare particularly invasive even when shooting into bright sources of light.

It is difficult to find fault with the speed and accuracy of Micro Four Thirds lenses, especially when used on the latest Micro Four Thirds bodies. In our tests with the GX85, G85, E-M10 III and E-M1, we found that the 15mm and 17mm, in addition to being deadly silent, were very quick to lock onto a subject, especially in S-AF. The performance only decreases a little in low light situations and in C-AF.

When the focus ring of the 17mm is switched into MF mode, it only moves between the focusing limits, which is the equivalent of a quarter of a turn. This means that the speed at which you turn the ring doesn’t affect how quickly you travel from infinity to the minimum focus distance. Switch the ring back into AF mode and it turns indefinitely, even when the camera set to manual focus in the menu. In this case, the speed at which you turn the ring does influence how long it takes to travel from one extreme to the other.

Unlike the 17mm, the focus ring of the 15mm turns indefinitely regardless of whether you push the switch to MF or AF.

One thing to keep in mind about the clutch mechanism of the 17mm focus ring is that when it is engaged, the minimum focus distance is longer.

Both lenses operate with precision especially when combined with the manual assists (magnification, focus peaking) of Micro Four Thirds cameras.

I’ve spoken to many Micro Four Thirds users since reviewing the Leica 15mm back in 2015 and the consensus is nearly unanimous: it is by far one of the most well-made and enjoyable lenses to use in the Micro Four Thirds range.

Not only is it extremely compact and intelligently constructed but it also delivers some of the best optical quality of any lens for the system.

In light of this, I think it’s safe to say that the 17mm is up against some pretty stiff competition. Although the build quality is comparable, it lacks the edge-to-edge sharpness of its Leica-branded sibling, as well as some of the tiny yet thoughtful details that make the 15mm such a pleasure to use, such as the physical aperture ring, included lens hood, and rubber lens cap for the hood. The main exception is the 17mm’s sliding focus ring which reveals a physical distance scale when MF is engaged, a characteristic that street photographers in particular could find useful.

For these reasons, I would always recommend the 15mm over the 17mm unless the person in question insists on owning a 35mm equivalent focal length.

Of course there is also the price to consider but in the case of these two primes, it isn’t really an issue as only $50 separates them. However, since neither is particularly new, it is also worth checking out the second-hand market for some interesting deals.

Check price of the Panasonic Leica 15mm f/1.7 on