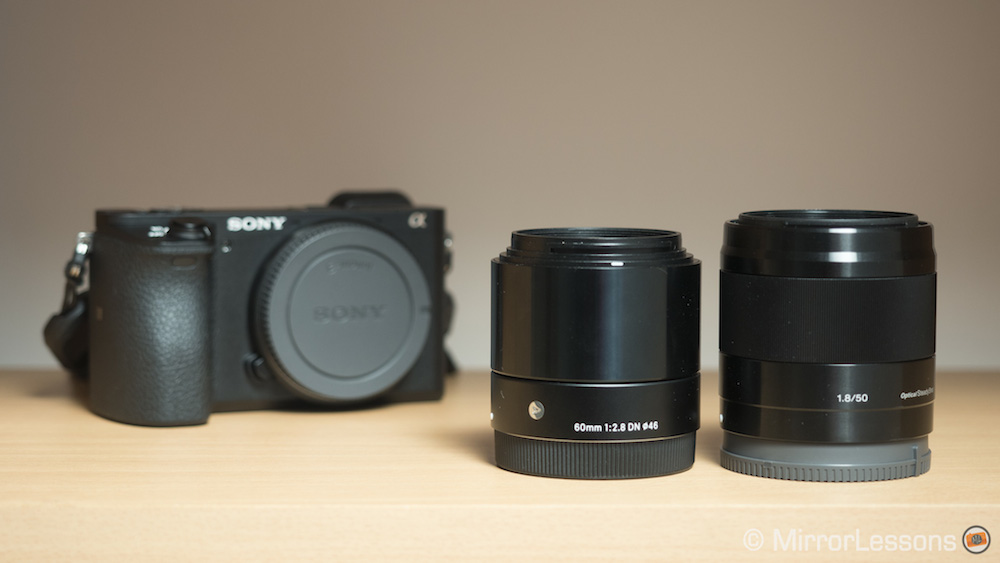 Two of the earliest portrait lenses for the Sony E mount system were the Sony E 50mm f/1.8 OSS and the Sigma 60mm f/2.8 DN A. The former appeared in 2011, just a year after the E mount was launched, whereas the latter arrived in 2013 and is one of three of Sigma “Art” lenses for mirrorless cameras with a Sony E or Micro Four Thirds mount.

Despite their age, we felt it was worth comparing these two lenses side-by-side given the ever-growing in interest in Sony’s range of APS-C cameras featuring the E-mount. Let’s have a look and see what they have to offer!

Ethics statement: Sigma UK provided us with a sample of the Sigma 60mm f/2.8 to test for three weeks. We bought the Sony 50mm f/1.8 for our own personal use. We were not asked to write anything about the lenses, nor were we provided with any sort of compensation. Within the article, there are affiliate links. If you buy something after clicking the link, we will receive a small commission. To know more about our ethics, you can visit our full disclosure page. Thank you!

Most lenses designed for the Sony APS-C system are fairly light and compact, and the Sony 50mm and Sigma 60mm are no exception. The Sony is just a little taller, thicker and heavier than the Sigma but these differences become irrelevant once you mount the lens onto your camera.

Whereas the fastest aperture of the former is f/1.8, the latter is limited to f/2.8. Both have a minimum aperture of f/22 and seven circular aperture blades.

The build quality of both is good thanks to the combination of metal and plastic parts, including a solid metal mount. The only drawback is the lack of weather-sealing. Be aware that when you shake the Sigma in “power off” mode (when the camera is off or the lens is detached from the mount), you will notice that the focusing mechanism makes a rattling noise. This is no cause for concern as it happens with all Sigma DN Art lenses and disappears once you turn the camera on.

As far as physical features go, there is only one to speak of: the large fly-by-wire focus ring that occupies most of the barrel. While the Sony’s is ribbed and therefore a little easier to grab and twist, that of the Sigma is more prone to superficial scratching due to its smooth and shiny surface.

Both lenses come with a rounded plastic lens hood (the Sony’s is noticeably longer) and a clip-on lens cap. They also feature a filter thread (49mm on the Sony versus 46mm on the Sigma) to which you can attach ND filters. 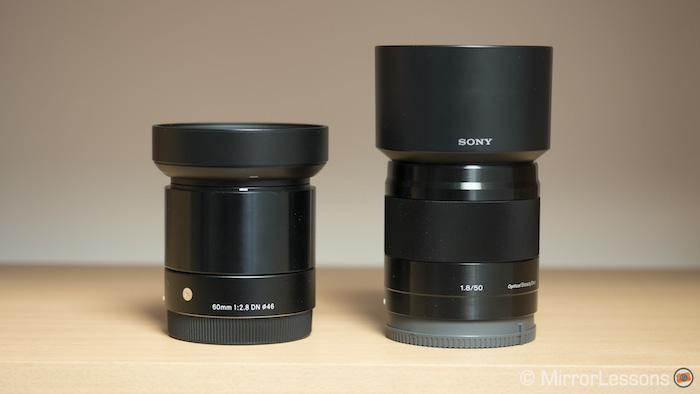 Sadly, neither lens has a particularly impressive minimum focus distance (39mm on the Sony and 50mm on the Sigma), so they are of little use for macro work.

Looking at side-by-side images taken a short focus distance, we can see that the Sigma is sharper than the Sony at the centre between f/2.8 and f/4, whereas the results become much more similar from f/5.6 onwards. On the Sigma, sharpness peaks at f/4 whereas the best performance is found at f/5.6 on the Sony.

By f/11, diffraction starts to influence the sharpness of the image but it only becomes noteworthy at f/16.

As for the Sony’s fastest value of f/1.8, it is significantly softer than f/2.8 on either lens.

We can observe a similar trend with images taken at a longer distance: the Sigma is once again a little sharper than the Sony at f/2.8 and f/4 but things even out after f/5.6.

Also interesting to note is that the Sigma’s corner sharpness is much better than the Sony’s at all values.

It isn’t very often we can say this about two lenses in a similar category but the Sigma seems to have the Sony beat in terms of overall sharpness, which isn’t surprising considering the Sigma’s reputation as an excellent performer.

If the Sigma wins in terms of sharpness, the Sony certainly has the advantage of the faster f/1.8 aperture, which is capable of rendering a shallower depth of field with larger specular highlights than the Sigma whose maximum aperture is only f/2.8.

The Sigma is aided by its slightly longer focal length, which helps to blur the background and compensates to some degree for the lack of a very fast maximum aperture but it isn’t capable of producing the same results as the Sony. What is also interesting to note is that at f/2.8, the highlights begin to take on the shape of the seven blade diaphragm on the Sony.

With the right background, you’ll notice the both produce a mild swirly effect that suits portraits very well. At their fastest respective apertures, the specular highlights assume a cat’s eye shape near the edge of the frame. Though the Sony at f/1.8 undoubtedly produces the most visually pleasing result, I personally find the rendering of the Sigma more attractive when both lenses are set to f/2.8.

The Sony and Sigma, like most lenses, aren’t immune to flare and ghosting, though I never found it particularly invasive. The worst examples always occur when you shoot into direct sunlight, such as in the two sample images below.

Chromatic aberrations can be more problematic on the Sony. It is present at f/1.8 and f/2 and may even rear its ugly head at f/4. As for the Sigma, I didn’t come across any relevant examples of chromatic aberration during my testing period.

The Sony lens produces very little native distortion and that which does exist is either corrected in-camera (JPGs) or in a post-production software with the native lens profile (RAW). In fact, if you disable the profile corrections in Lightroom, there is hardly any difference between the corrected and uncorrected versions.

In the case of the Sigma, you’ll notice that Lightroom makes a small adjustment if you activate the dedicated profile in the Lens Corrections section.

Some mild vignetting is present up until around f/5.6 on the Sony lens, or f/2.8 on the Sigma, but it can be corrected either manually or by applying the dedicated lens profile.

The Sony 50mm offers a field of view equivalent to 75mm on full-frame cameras, whereas the Sigma 60mm offers a slightly longer 90mm. Both can be classified as medium telephoto primes and suit a variety of genres including portraits, weddings, events, travel and even landscapes in some cases.

The Sigma appears to have a slightly cooler rendering than the Sony when set to the same white balance. Keep in mind that if you use the RAW files, you can adjust the colours of your image in post-production to suit your taste.

In our tests with the Sony lens on the a6300, we were able to take sharp images down 1/5 of a second following a few attempts but our success rate was higher between 1/10 and 1/15 of a second.

In the case of stabilised bodies such as the a6500, the camera uses 3 axes on the sensor and 2 axes on the optically stabilised lens to produce a combined 5-axis stabilisation system. Our review of the camera revealed that combining optical and in-body stabilisation doesn’t provide a tangible advantage over optical stabilisation on its own. For this reason, it wasn’t a surprise that we were only able to manage a slightly better result of 1/4 of a second with the Sony 50mm.

The Sigma isn’t stabilised, so it is best to stick with safe shutter speeds above 1/20 of a second if you want sharp results on a non-stabilised body.

To test the autofocus of the two lenses, I used the a6300 with the latest firmware (version 1.10). It uses Sony’s most recent hybrid autofocus system which comprises 425 phase detection AF (PDAF) points and 169 contrast detection points. You can find out more about the a6300’s autofocus system here.

There is very little to say against the autofocus mechanism of the Sony lens: it is quick in good light in both single AF and continuous AF, especially when combined with the phase detection autofocus system (PDAF) of the latest Sony bodies, and only slows down a little in poor light conditions or scenes with little contrast.

The Sigma, on the other hand, is somewhat more sluggish because the PDAF squares only work at the very centre in Wide or Expand Flexible Spot mode. In any of the other modes and anywhere else across the frame, the lens relies on contrast detection autofocus. It works well in S-AF with static subjects but once you try to track moving subjects, be they slow or fast, the lens has a difficult time keeping up. In fact, I used the lens at a parade and less than half of my images were in focus.

The AF mechanism of both lenses is very quiet, making them useful for stills and video work.

The fly-by-wire manual focusing experience of both lenses is fine but between the two, we tend to prefer the Sony’s focus ring, not only because it has a ribbed design but also because it provides smoother transitions than the Sigma.

The time it takes to travel from infinity to the minimum focus distance on the Sony depends on the speed at which you turn the ring: turning it quickly takes 1 1/4 of a turn whereas turning it slowly requires nearly 3 full turns.

The Sigma requires a 3/4 turn regardless of how fast or slow you turn the ring.

As we’ve already seen, the Sony 50mm and the Sigma 60mm each come with their own set of advantages and disadvantages.

The Sony provides two main benefits over the Sigma: the inclusion of optical stabilisation and complete compatibility with Sony’s latest PDAF system. Thanks to the former, you can use shutter speeds down to around 1/5 of a second on any Sony APS-C body, stabilised or not, whereas the latter is advantageous if you frequently shoot moving subjects or want to use Sony’s Eye AF function to its full potential.

What surprised me about the Sigma was its sharpness at all apertures across the frame, regardless of whether you set it to a short or long focus distance. This makes it a good option not only for portraits but also street and landscapes. At the most important apertures of f/2.8 and f/4, it beats the Sony while all values at f/5.6 and beyond are extremely close.

As for the out-of-focus rendering, the Sony has a leg up on the Sigma because of its faster maximum aperture of 1.8. That said, we do find that the Sigma has a very nice bokeh rendering at f/2.8.

Finally, there is the small matter of price to consider. Since neither lens is recent, you can find them both at a good price second-hand. However, if you plan to buy them brand new, be aware that the Sony generally costs between $20 and $40 US more than the Sigma.