Although kit zooms are a good way to begin your photography journey due to their versatile focal range, it doesn’t take long to grow frustrated with their inferior optics and slow aperture range. A good companion for the kit zoom is the prime lens: not only do they provide better optical quality and a faster maximum aperture, but they can also be quite affordable.

Two such primes for the Sony APS-C system are the E 35mm f/1.8 OSS (a standard lens) and the E 50mm f/1.8 OSS (a mid-telephoto lens). With one or both in hand, you can experiment with low-light photography and shallow depth of field thanks to the fast 1.8 aperture, and enjoy the full resolving potential of your camera’s sensor thanks to the sharpness of the optics.

Ethics statement: We bought the Sony 35mm f/1.8 and 50mm f/1.8 for our personal use. We were not asked to write anything about the lenses nor were we provided with any sort of compensation. Within the article, there are affiliate links. If you buy something after clicking the link, we will receive a small commission. To know more about our ethics, you can visit our full disclosure page. Thank you!

Despite the 50mm being taller and slightly heavier than the 35mm, the two lenses are actually very similar in terms of their design. Their barrels are constructed from high quality plastics encased in a smooth metal shell that comes in either black or silver. The only external feature is a ribbed fly-by-wire focus ring.

Both have seven circular aperture blades, an aperture range of 1.8 to 22, a 49mm filter thread, and Sony’s optical stabilisation system (Optical SteadyShot). Because they are so small and light, they are an excellent match for any camera in Sony’s APS-C range, from the high-end a6500 to the tiny NEX 3N, and can easily fit inside a jacket pocket. 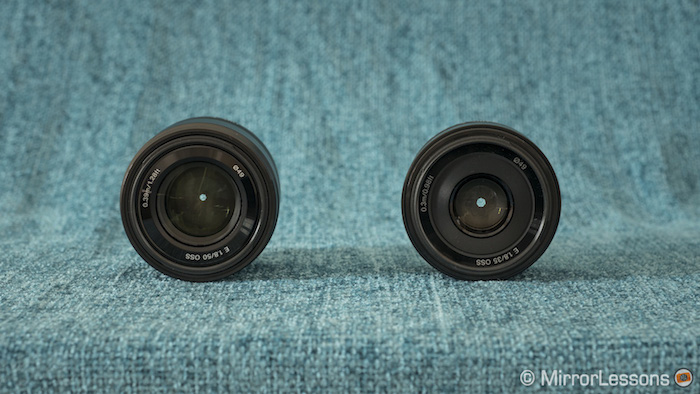 Both lenses come with a lens hood that screws onto the end of the barrel. That of the 35mm is petal-shaped while the 50mm’s is round and noticeably longer. 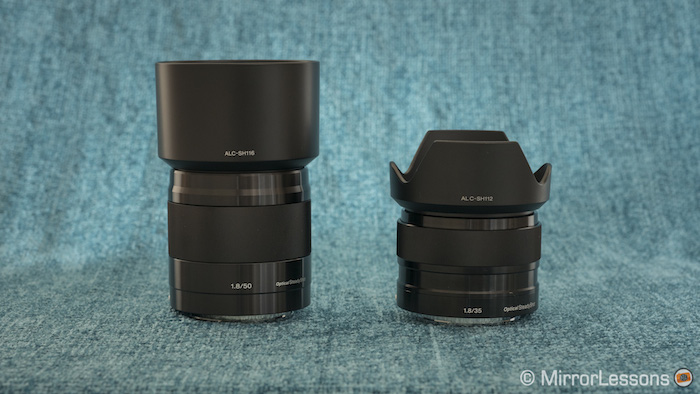 Neither lens is weather-sealed, so it is worth protecting your gear in anything heavier than light rain.

Our first set of images were taken from the same spot at a distance.

In this case, we can see that the 50mm displays better sharpness, detail and micro contrast at the centre when set to their shared maximum aperture of f/1.8. This can partly be attributed to the increased magnification of the 50mm.

Stop down to f/2.8 and we see a noticeable jump in sharpness and contrast from the 35mm. The 50mm also shows an improvement but it isn’t as perceptible as with the 35mm. Between the two, the 50mm remains slightly sharper.

At f/4 and f/5.6, the 35mm continues to improve while the results from the 50mm remain more or less the same as f/2.8. At these values, the lenses reach their peak performance and are quite comparable if we exclude the difference in magnification.

Starting at f/8, both lenses begin to show some very slight signs of diffraction which intensify beyond f/11. While the results at f/16 are still usable, f/22 is far too soft.

Though the 35mm’s lack of corner sharpness up until f/5.6 may seem like a negative point on the surface, it matters less for street and landscapes where you’d be using a slow aperture anyway, or environmental portraits, where the subject at the centre is the main focus.

Our second set of images was taken at a close working distance. Since the difference in field of view is even more accentuated at a close range, I decided to use a similar composition so that I could more easily observe the differences.

At this distance, both lenses are somewhat soft at their fastest aperture of f/1.8 but sharpness visibly improves by f/2.8. Between the two, the 50mm appears ever-so-slightly sharper than the 35mm at both values.

Both lenses are at their sharpest between f/5.6 and f/11 and the results are quite similar.

Both the 35mm and 50mm are capable of producing a pleasant out-of-focus rendering, or bokeh. At their shared fastest aperture of 1.8, both lenses produce circular specular highlights (bokeh balls) at the centre of the frame. At the corners and edges, this symmetry gives way to a “cat’s eye” shape.

The 50mm, being a longer focal length, is not only capable of better subject separation and a smoother out-of-focus rendering but it also produces larger bokeh balls than the 35mm. And whereas the 35mm’s bokeh balls are speckled and feature noticeable “onion rings”, the 50mm’s are clean and practically featureless.

Both lenses are vulnerable to flare, but it rarely poses an issue in a real-world situation unless you shoot into direct sunlight. This is because the lens hood does a good job of mitigating flare and ghosting in most situations, and when it does appear, it isn’t particularly invasive. Below you can find examples of the worst flare I encountered during my testing period. Had I slightly adjusted my composition, I could have reduced its intensity.

Chromatic aberration can be more problematic, as it is very visible at the fastest apertures (f/1.8 and f/2) and doesn’t completely disappear until f/4 (with the 35mm) or f/5.6 (with the 50mm). Appearing at both at the centre of the frame and the edges, it isn’t always easy to remove, even with the dedicated lens correction tool in Lightroom.

The 50mm produces very little native distortion and that which does exist is either corrected in-camera (JPGs) or in a post-production software such as Lightroom with the native lens profile (RAW). In fact, if you disable the profile corrections in Lightroom, there is hardly any difference between the corrected and uncorrected versions. Do the same with images taken with the 35mm and you’ll notice a small adjustment to the extreme corners.

Vignetting is also perfectly corrected by the lens profile. Deactivating it will reveal some corner shading at all apertures on the 35mm or up to around f/5.6 on the 50mm.

The reason we’ve labeled this an “apples vs. oranges” comparison is because the 35mm and 50mm have completely different fields of view and are, as such, intended for different photographic genres. The former is a standard lens that can be used for almost any genre, from street and documentary to environmental portraits, travel and landscapes, while the latter’s medium telephoto length is ideal for upper body portraits. Below you can see the difference in field of view.

Of course, if you want to experiment, there is nothing stopping you from tackling other genres with the 50mm, or using the 35mm for portraits taken at a close distance. However, be aware that in the case of the latter, distortion might exaggerate certain facial features. A good example is the two portraits below where Mat’s nose looks a little bigger in the image taken with the 35mm.

Both lenses feature Optical SteadyShot, which is Sony’s version of optical stabilisation. Coupled with the fastest apertures, it allows you to work in less than ideal light conditions without having to raise your ISO values too high. To test its effectiveness, we used it on both the stabilised Sony a6500 and non-stabilised Sony a6300.

When mounted on the stabilised a6500, the camera uses 3 axes on the sensor and 2 axes on the optically stabilised lens to produce a combined 5-axis stabilisation system. Curiously, this updated system didn’t appear to provide a tangible advantage at slow shutter speeds. With the 35mm, the slowest I could go was 1/3 of a second, which is identical to the result I achieved with the optical stabilisation on its own. The 50mm, on the other hand, gave me a slightly better result of 1/4 of a second following a couple of attempts.

Compared to the optical stabilisation of other lenses we’ve tried, Sony’s OSS isn’t the best, but we find it sufficient for most low-light situations where some ambient light is present.

There is little to say against the autofocus mechanism of these two lenses: it is quick in good light in both single AF and continuous AF, especially when combined with the hybrid autofocus system of the latest Sony bodies, and only slows down a little in poor light conditions or scenes with little contrast. The AF mechanism is also very quiet, making these lenses useful for video work as well.

Although both lenses utilise a fly-by-wire manual focus ring, we’ve found that they are smooth, accurate and easy to turn thanks to their ribbed design. However, to go from the minimum focus distance to infinity, you must perform a full turn of the focus ring with the 35mm, or two full turns with the 50mm, which is somewhat cumbersome if you are in a hurry to focus.

We also noticed that there is a visible gap between the focus ring and the lens barrel on the 50mm, which could become a dust trap over time. As such, we suggest giving the lens a frequent clean to keep it in tip-top shape. 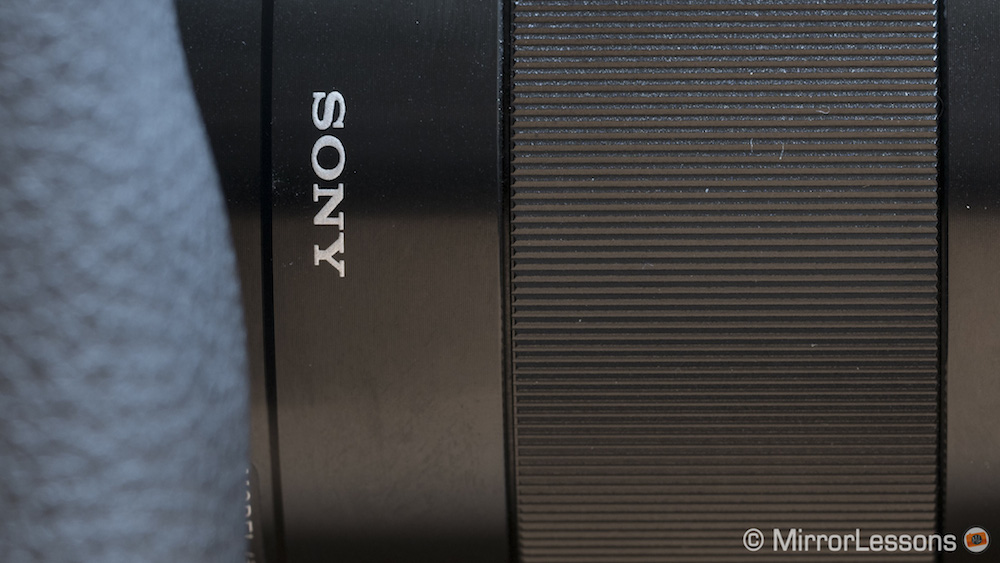 Even though the 35mm and 50mm are two very different focal lengths, either would make a worthy “first prime” for anyone just starting to build a lens collection for their Sony APS-C camera. Not only do they deliver good sharpness and a pleasant bokeh, but the combination of the relatively fast 1.8 aperture and built-in OSS also allows you to easily work in difficult light conditions. Whether you choose to invest in one or the other first mainly depends on your photographic interests.

The 35mm f/1.8 is a standard lens with a field of view close to that of the human eye. As such, it is suitable for those who enjoy dabbling in a variety of genres, from street photography to environmental portraits to travel.

Though the 50mm f/1.8 can also be used for these genres, its main calling is portraiture due to its mid-telephoto length. This makes it an ideal choice for those who are partial to photographing people, be they family members, models, or strangers on the street.

It is also worth mentioning that Sony APS-C users aren’t limited to the 35mm f/1.8 and 50mm f/1.8. Sigma, for example, has produced two 30mm lenses and one 60mm lens which, while not identical in focal length, can fulfil a similar role to the 35mm and 50mm. You can read more about these prime lenses and how they compare to the Sony versions by following the links below.