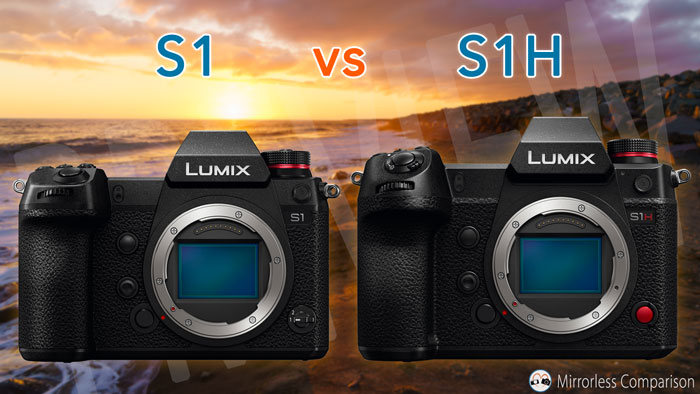 After launching the S1 and S1R in early 2019, Panasonic has unveiled the third model in the series. In a similar manner to the Micro Four Thirds GH series, the letter “H” is a reference to its video centric features.

The design is very similar, the sensor looks the same, and both have excellent video capabilities, so what’s the difference? Let’s find out below!

Ethics statement: The information supplied in this article is based on our personal experience with the Lumix S1 and official specifications. We were not asked to write anything about these cameras, nor were we provided with any kind of compensation. Within the article, there are affiliate links. If you decided to buy something after clicking the link, we will receive a small commission. To know more about our ethics, you can visit our full disclosure page. Thank you!

The S1H is a bit larger than the S1 and S1R cameras. This is to facilitate heat dissipation (more on this below). As a result, the new camera is slightly heavier as well.

The increased size has allowed Panasonic to re-design a few things. There is a larger 1.8-in screen on top and two tally lights on the front and rear.

You can also notice two big red buttons to start the recording. The one on the front replaces the focus mode selector which is now located on the rear. The one on top replaces the On/Off switch which has been relocated to the shutter release button.

Panasonic has increased the size of the camera, most noticeably its depth, in order to incorporate a fan designed to dissipate the heat and allow the camera to record for unlimited time, no matter the format or frame rate you’ve chosen. The S1 by comparison has unlimited recording in 4K up to 30p only.

Fans are common on professional camcorders as they all have to cope with high frame rates and must allow for long periods of recording. But this is the first time such a solution has been adopted on a mirrorless camera, and is a clear sign of how pro-video oriented the S1H is.

The S1 has a 3-way tilting mechanism that, similar to the Fuji X-T3, allows you to move the screen up, down, and open it to the side up to approximately 70˚. It is useful for still shooters (if you compose vertically) but less so for video-makers.

That’s why the S1H has a multi-angle mechanism that allows you to open it to the side and rotate it 180˚. Furthermore, because the screen is further away from the connector on the side (thanks to the added thickness of the fan mechanism), the audio or video connectors don’t block the screen.

Both cameras feature two memory card slots. The S1 has one for an XQD card, which are thicker, more robust and have a faster writing/reading speed, as well as a second slot for SD cards with UHS-II compatibility.

The S1H uses two SD slots that can accommodate UHS-II cards. This is because when recording video, you don’t necessarily need the fastest card available as long as the writing speed meets the requirements of the bitrate you want to use. SD cards are cheaper and therefore it makes sense for Panasonic to go this route with the S1H. (But they could have done the same for the S1 as far as I’m concerned.)

The sensor on the S1H is an updated version of the one found on the S1. One of the differences is the addition of an optical low pass filter on the “video” model. This ensures there won’t be any moiré artefacts and in general, it is the preferred solution for video.

The second important difference is the ISO sensitivity. The range is the same on both cameras: ISO 100 to 51200, with extended values down to ISO 50 and up to ISO 204800.

However the S1H has a dual gain architecture, what Panasonic calls Dual Native ISO. It is something we’ve already seen on the GH5S micro four thirds camera.

The S1 can record 4K video up to 30p, or up to 60p with an APS-C crop. These are definitely good specs, but the larger cameras has such an impressive array of resolutions, frame rates, compressions and bitrate options that it would take a long time to list them all.

So let’s take a look at the most important things the S1H can do that the S1 cannot:

The S1H also has anamorphic format options that works in 4K up to 50p.

If you buy the optional upgrade software key (DMW-SFU2), you can unlock 10-bit 4:2:2 internal recording, V-Log and other features of the S1H on the S1. Without the upgrade, the only 10-bit recording you can use is with the HLG profile, which uses the HEVC codec (10-bit 4:2:0) but at a lower bitrate of 72Mbps.

Finally, when it comes to bitrates, the S1H can go up to 400Mpbs with the ALL-I compression in 4K up to 30p, or 200Mbps LongGOP when recording at 50/60p or higher than 4K resolution.

The S1 has a Variable Frame Rate mode that allows you to shoot at a fast frame rate (60p in 4K or up to 180p in Full HD) and save the clip at 25p or 30p, which means you get the slow motion result in camera. However, there is no audio or autofocus and it only works in 8-bit.

The S1H gets the HFR mode, which means that you have to conform the footage in post to get the desired slow motion effect. The advantage though is that it works in 10-bit with audio and autofocus can be used as well.

Atomos, the company behind popular recorders such as the Ninja, has announced that it is developing RAW data output via the HDMI connection. This will allow S1H users to record video in 4K up to 60p using the RAW video format.

Note that Atomos is developing the same solution for the Nikon Z6 mirrorless camera.

The S1 was launched at a retail price of $2500, but there are already some offers that can knock the price down a little.

It is pretty easy to distinguish these two cameras. The S1H is designed for video, and more specifically, for professional filmmakers who want to find the same high-end specs, settings and performance normally found on a pro camcorder inside a mirrorless body. The range of recording formats, frame rates and resolutions is impressive, if not overwhelming. I was already impressed by the video capabilities of the S1, so if we consider that the S1H can do better thanks to Dual Native ISO and future RAW recording via HDMI, we might have in front of us the ultimate video machine in the mirrorless realm.

That being said, the S1H is more expensive and I think that for many people, what the S1 has to offer will be more than enough (and I include myself in this category). After all you still get 10-bit 4:2:2 internal recording, 4K up to 60p and many other things that video-makers will like. Granted, you need to pay in order to unlock some of these features, but the overall expense is still inferior to that of the S1H.

And let’s not forget that the S1 is also a photography tool with an excellent sensor and superb image stabilisation. The autofocus is the only Achille’s heel. The S1H has still capabilities as well, but it wouldn’t make sense to spend over $1000 more just to have the same quality as the S1.

Check price of the Panasonic Lumix S1 on
B&H Photo

Check price of the Panasonic Lumix S1H on
B&H Photo