Within Panasonic Lumix’s range of mirrorless cameras, there are two branches whose styling resembles that of an SLR: the GH and G series. Both have proven popular over the years, albeit amongst different user bases.

While GH series has traditionally targeted professional videographers with its state-of-the-art video features, the G series can be classified as a portable budget solution for users with a developing interest in both stills and video.

In the following comparison preview, we’re going to be looking at how the most recent GH and G models – the GH5 and G85 – compare. Although they share a number of characteristics including a Micro Four Thirds sensor, 5-axis in-body stabilisation with Dual I.S. 2 compatibility and extra still and video features, there are also many differences to take into account, especially concerning their video specifications.

As always, should we get the chance to use them side-by-side at some point in the future, we will update this preview to a complete comparison!

Ethics statement: The information supplied in this article is based upon the official specifications found on the Panasonic website and our personal experience with Panasonic cameras. We were not asked to write anything about these cameras, nor were we provided any compensation of any kind. Within the article, there are affiliate links. If you decide to buy something after clicking the link, we will receive a small commission. To know more about our ethics, you can visit our full disclosure page. Thank you!

Of course, the extra surface area on the GH5 also allows for a few more external controls, such as an AF joystick to change the AF point on the fly, a Dual SD card slot, and additional customisable function buttons (20 vs. 11 including virtual buttons on the rear touch screen).

The G85 does have one advantage, however, which is the built-in pop-up flash. To use flash on the GH5, you must buy one separately and attach it to the hot shoe. 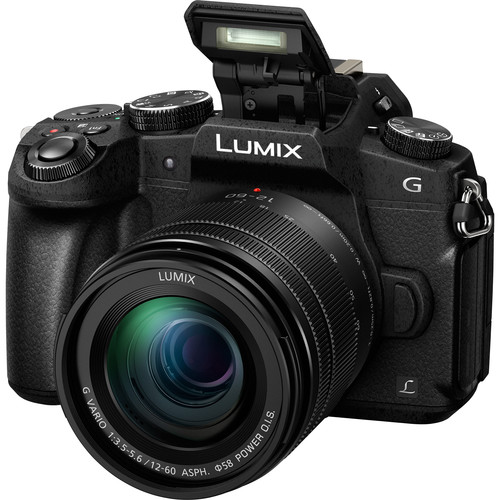 Although both models come with an excellent built-in OLED viewfinder, that of the GH5 has a higher magnification (0.76x vs. 0.74x) and more resolution (3,680k vs 2,360k dots). When reviewing the G85, we found the viewfinder very fluid and comfortable to use, which suggests that the GH5’s should be even better.

There are advantages to being the most recent flagship model, one of which is receiving new features before any other model, such as the latest sensor.

In the case of the GH5, it houses a brand new 20MP Live MOS Micro Four Thirds sensor that ditches the optical low-pass filter for increased resolution. Coupled with this is the new Venus Engine 10 that promises better colour detail, contrast, dynamic range and high ISO performance.

The G85 has the same 16MP Live MOS Micro Four Thirds sensor seen on previous models in the Lumix range with the exception that it too lacks an optical low-pass filter, allowing for extra resolution.

The G85 offers 4K internal recording and all the latest 4K Photo modes that let you extract an 8MP JPG from any frame shot at 30fps with H.264 compression algorithm.

The GH5, on the other hand, is the very first mirrorless camera to have 6K capabilities, not as a normal 16:9 video format but rather for use with the following features:

The GH5 also brings new features to the 4K/6K Photo mode such as noise reduction at the higher ISOs and rolling shutter correction without altering the angle of view by using multiple frames to analyse and compose the final picture.

Currently, the GH5 is capable of 4K with 4:2:0 8-bit compression, a maximum frame rate of 60/50fps in 4K and a 150Mbps bitrate. However, when two firmware updates come to the camera later this year, it will have an even more impressive selection of high resolution formats, frame rates and bitrates that are normally limited to expensive camcorders. Let’s have a look at what we can expect!

The first firmware, scheduled for April/May, will bring the following to internal recording:

The second, scheduled for summer 2017, will bring:

Being able to record internally in 4:2:2 10-bit, the GH5 will have much more colour information and colour depth compared to the internal recording of the G85. 4K at 50 or 60fps will remain the only option that is 4:2:0 8-bit compression on the GH5.

In Full HD, the GH5 has a maximum frame rate of 180fps, giving you good slow motion capabilities. By contrast, G85 can only go as high as 60fps.

Please note that all the video specifications mentioned in this section are based on the H.264 standard. H.265 only applies to the 6K and 4K Photo modes of the GH5.

If you thought we were done with the differences in video-related features, think again!

First, the G85 performs a sensor crop when recording in 4K, whereas the GH5 doesn’t, meaning you can keep the native field of view of your MFT lenses.

Being the more advanced video camera of the two, the GH5 comes with three picture profiles: Cine-Like D, Cine-Like V and the Like 709 profile for compatibility with HDTV. With a $100 paid upgrade, you can also get the V-Log profile to record even more dynamic range. You will find Cine-Like D and V profiles on the G85 as well, but they aren’t proper LOG profiles like those on the GH5.

Some extra additions found on the GH5 include real-time LUT when recording in V-Log, a vector scope and a waveform available to display on the LCD monitor. The firmware update will bring a new Hybrid Log Gamma Photo Style (picture profile) that will allow you to record in 4K HDR, a new gamma profile that is making its way onto UHD TVs and BlueRay.

Another welcome addition to the GH5 is unlimited recording, while 30 minutes is the maximum on the G85. (Note that the G85 recording limit doesn’t apply in all countries.)

The GH5 also has a full-sized HDMI port instead of the micro HDMI port of the G85.

Finally, if you want audio, you will find a 3.5mm microphone input on both cameras but only the GH5 has headphone output. Panasonic also released the DMW-XLR1 alongside the flagship camera, a new optional accessory that adds physical controls and two XLR inputs for microphones. It is smaller than the YAGH interface and can be mounted on the hot-shoe.

Panasonic’s most recent Lumix cameras all use Depth from Defocus (DFD) technology, a contrast detection autofocus system that calculates the distance to the subject by evaluating two images with different depths of field. In our experience, it works well in all situations except those with fast moving subjects, birds in flight or difficult light conditions such as strong backlight.

The G85 features the first generation DFD system. It comes with 49 AF points, and can detect the contour of the subject every 6 frames. The speed of the sensor drive is 240fps.

The second generation of its DFD system makes its first appearance on the flagship GH5. Not only has the number of focus points increased to 225 but it also has a new motion detection algorithm and a 480fps drive speed that is two times as fast as that of the G85. The DFD technology now identifies the subject in all frames and analyses it with more resolution.

Whether there is a tangible difference between the two systems has yet to be seen, but given the specifications, there should certainly be some improvements.

The GH5 also features a new set of customised AF settings that aren’t found on the G85, or any other Lumix camera for that matter. The following settings can be customised:

As for the continuous shooting speeds, the GH5 can shoot at a maximum of 12fps in Single AF mode while the G85 only goes up to 9fps. The GH5 also performs better in Continuous AF with a maximum speed of 9fps in comparison to 6fps on the G85.

The buffer capabilities are also better on the GH5, with the ability to take over 60 consecutive RAW frames in a burst versus the 45 frames of the G85.

Both cameras feature a new, more robust shutter unit that reduces shutter shock. However, while both have a maximum shutter speed of 1/16000 with the electronic shutter, the mechanical shutter of the GH5 is faster (1/8000 vs 1/4000).

Along with giving the camera a larger rear monitor, Panasonic also took the opportunity to re-design the menu system, giving it a more professional appearance and increasing the number of items per page to 8 instead of just 5 on the G85.

Both cameras have Wifi capabilities that let you remotely control the camera or save and transfer images to a mobile device but the GH5 has the added benefit of bluetooth, letting you maintain a constant connection with your phone or tablet while using the camera.

I opted to save the final difference between the GH5 and G85 for the conclusion, as it will likely be the primary factor that will influence your decision.

For the number of features it offers, the G85 provides the best bang for the buck of almost any mirrorless camera on the market today. For just under $1000 with the 12-60mm kit lens, you get an excellent 16MP Micro Four Thirds sensor, 5-axis in-body stabilisation with Dual I.S. 2 compatibility that works for stills and video, very good burst speeds, decent autofocus performance, a built-in EVF and touchscreen, and a smattering of extra features, including the latest 4K Photo modes and WiFi connectivity.

The GH5 costs twice as much as the G85 for the body alone but it also targets a demographic whose video-related needs are more complex than those of an enthusiast. In addition to being the first prosumer camera to offer 6K capabilities for specific uses, the GH5 also offers an impressive array of high resolution formats, frame rates and bitrates usually reserved for high-end camcorders, not to mention all the aforementioned features of the G85. For those who take video seriously, it is a proposition that is hard to ignore.

Check price of the Lumix GH5 on