You are here: Home / Preview / The 10 Main Differences Between the the Panasonic G7 and G85 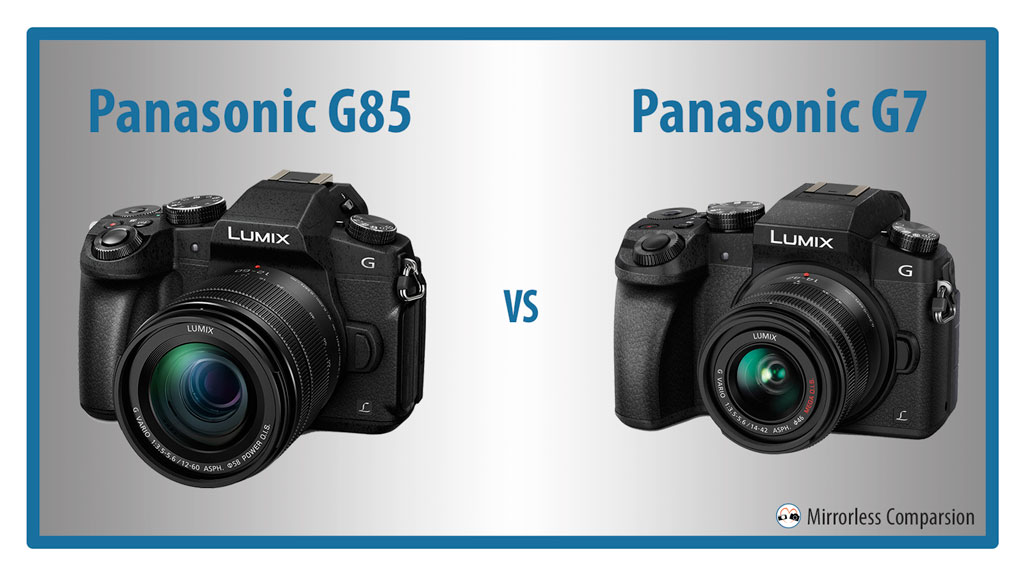 The G85 is the successor to the G7, and as such, carries forth the design of its predecessor while packing some of the most recent technology from Panasonic. The most interesting addition is definitely the 5-axis stabilisation, a feature we all know and love on Olympus and Sony cameras and that we appreciated on the Lumix GX85 as well.

The two cameras look very much alike from the outside and many of the key specifications are still the same: 16MP of resolution, 4K video up to 30fps with Cine-Like profiles, a mic input and 4K Photo. The G7 proved a popular model thanks to its ergonomics, excellent 4K video and competitive price and it looks like the G85 is headed in the same direction. Let’s analyse the 10 main differences worth sharing between the two.

Note: The GX85 also inherits Panasonic’s new naming system that involves giving different names to the same camera according to the continent where it is sold. The camera is called G85 in North America, G80 in Europe and G81 in Germany. To make things easier, I will refer to the North American name from now on (G85).

Ethics statement: The information supplied in this article is based on official specifications, press releases and our personal experience with Panasonic cameras. If we get the chance to test the two cameras side-by-side, we will publish a full comparison. We were not asked to write anything about these cameras, nor were we provided any compensation of any kind. Within the article, there are affiliate links. If you decided to buy something after clicking the link, we will receive a small commission. To know more about our ethics, you can visit our full disclosure page. Thank you!

The two cameras look like twins, so as you can imagine, the changes are very small. The G85 has a re-designed grip that looks more ergonomic on top and out front thanks to the vertical indent. The lens release button is slightly larger and the body is also heavier (505g vs 410g).

On the rear, we notice an indent where you can place your finger to open the LCD monitor. It is a simple yet welcome addition as the LCD screens on these cameras can often be uncomfortable to flip open. The thumb grip has been slightly re-designed, though the difference is really minimal, and the flash button has been moved to the side of the fake pentaprism.

Finally, if we turn our attention to the top, the G85 now has two Custom modes (C1 and C2) on the mode dial instead of just one C mode for the G7.

The G85 has a more robust body (full magnesium alloy chassis) and comes with dust and splash resistance, a welcome upgrade in comparison to the G7 that is not weather sealed and feels more plasticky.

Both cameras feature a 16MP Micro Four Thirds sensor but the G85 version lacks the anti-aliasing filter. It is the same sensor found inside the GX85. According to Panasonic, it should provide 10% more resolution in comparison to the older sensor found in the G7. Keep in mind that such a difference can only be noticed on textures with very fine details such as textiles.

Both cameras share the same native ISO sensitivity range of 200 to 25600.

The G85 has a new mechanical shutter with an electromagnetic drive. It is much quieter and is not affected by shutter shock, a problem that has affected several G7 users.

The G85 is the second Panasonic camera to feature 5-axis stabilisation after the GX85. It allows you to shoot sharp shots hand-held down to 1s with non-stabilised glass like M.Zuiko lenses if you are really steady. It also works with adapted lenses but you need to input the focal length manually.

With select Lumix lenses, you benefit from Dual IS: the camera combines the sensor and optical stabilisation and you can use slow shutter speeds. Our personal record is almost 1s hand-held with the Lumix 35-100mm 2.8 on the GX85 so you can expect even better performance with the G85 as it features an upgraded version of Dual IS.

The 5-axis sensor shift and Dual IS work for video recording and you also have the option of electronic stabilisation which crops the sensor a little more but gives you better results for static shots.

The G7 lacks internal stabilisation and as such, relies on the optical stabilisation of Lumix lenses. For video, this also means more jittery footage when using OIS. Dual IS, on the contrary, minimises jitter effects. With Olympus and other Micro Four Thirds lenses, you won’t get any kind of IS.

In addition to the standard monochrome profile, the new L.Monochrome style (introduced with the GX85) gives more contrast and a slightly more filmic look to the image. Remember that it only affects the JPGs.

The G85 can shoot up to 9fps with autofocus locked on the first frame, which is a little faster than the 8fps maximum speed of the G7.

In continuous AF, both cameras can shoot a maximum of 6fps. They also have a 40fps speed available in JPG mode at 3MP of resolution.

The G85 features 4K Light composition. It combines several still images of a 4K movie by saving just the brighter pixels and is useful for light painting. It also has Post Focus with Focus Stacking which lets you merge different images at different focus distances into one image with more depth of field.

The G85 also has new bracketing options including Focus and Aperture bracketing.

Along with the new G85, Panasonic also announced the DMW-BGG1 Battery Grip that can house two batteries to prolong the total battery life of the camera when shooting video or in continuous mode. You will also find the exposure control dials, a shutter release, AF/AE lock buttons and an exposure compensation dial.

The G7 doesn’t have a battery grip option (native or third party).

The G7, being an older model, can be found for $800 with the 14-42mm kit lens. You may also find second-hand deals and with the announcement of the G85, the price should decrease even more in the following months.

Panasonic made it clear during the press conference at Photokina: the Lumix G85 is here because users requested a camera with the latest technology and a more ergonomic body. It is a logical upgrade that should make the new camera even more popular than the Lumix G7 thanks to the 5-axis and Dual IS image stabilisation system and the new mechanical shutter.

Check the price of the Lumix G7 on