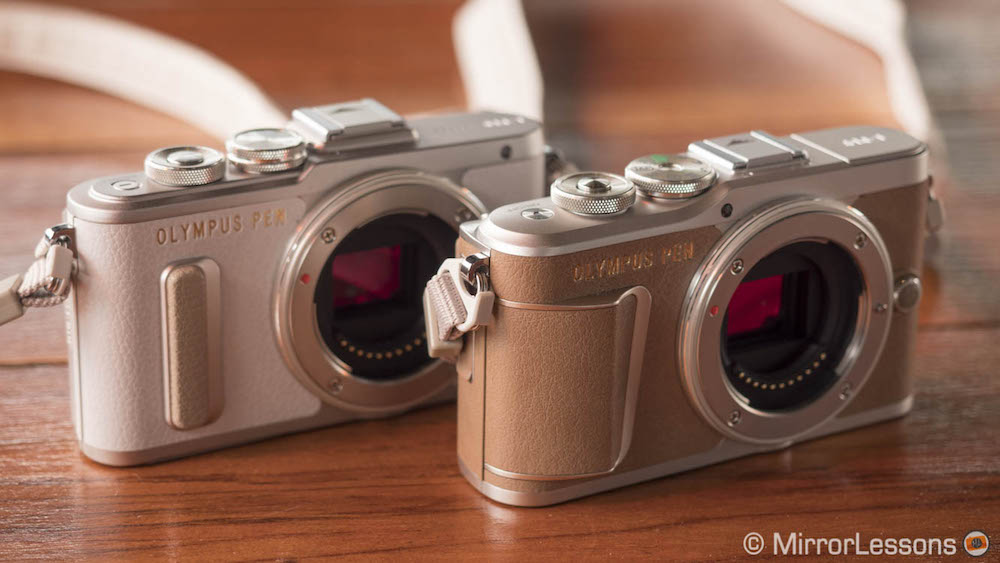 The recently announced Olympus Pen E-PL9 continues the Pen range’s ethos of combining high-end features with an attractive design for the target audience of fashion-conscious photographers and newcomers to photography.

In this preview, we’re going to be taking a look at the various ways in which this new model compares to its predecessor, the E-PL8.

Although many of the technical specifications are very similar, including the 16MP Micro Four Thirds sensor, 3-axis sensor stabilisation, touch sensitive LCD screen with a 180-degree tilting functionality for selfies, and contrast detection autofocus system, there are a few important updates on the E-PL9 that should please anyone considering an upgrade. Let’s get started!

Ethics statement: The information supplied in this article is based upon official specifications, a hands-on at the Olympus UK press event and our personal experience with Olympus cameras. We were not asked to write anything about these cameras, nor were we provided with any sort of compensation. Within the article, there are affiliate links. If you decided to buy something after clicking the link, we will receive a small commission. To know more about our ethics, you can visit our full disclosure page. Thank you!

Like the E-M10 III that came before it, the E-PL9 offers 4K recording at 30/25/24p as well as Full HD up to 60p. This upgrade was made possible thanks to the new TruePic VIII image processor, which is identical to that of the E-M10 III and flagship E-M1 II.

Based on the brief video samples we took with the 14-42mm EZ kit lens at the UK press event, the 4K quality looks decent but can lack some sharpness. This can probably be improved by using a sharper lens however.

Other video-related features include slow motion recording at 120fps in 720p and 4K time-lapse.

The E-PL8 has fewer features for video shooting. There is the possibility to shoot at up to Full HD at 30fps but that’s about it.

You can use the 3-axis in-body stabilisation of both cameras while recording a video.

Both cameras come with a built-in microphone (but no mic input), manual control over exposure, various effects and filters, and a maximum recording time of 29 minutes.

Although both Pen cameras utilise a contrast detection autofocus system, the new model benefits from more multi AF points – 121 versus 81 on the E-PL8 to be precise.

Physically speaking, the E-PL8 and E-PL9 would almost be indistinguishable were it not for a few subtle cosmetic changes.

For example, the grip on the new camera is larger, resulting in a slightly heavier body (332g vs 326g) but very similar dimensions (approximately 117 x 68 x 39mm). 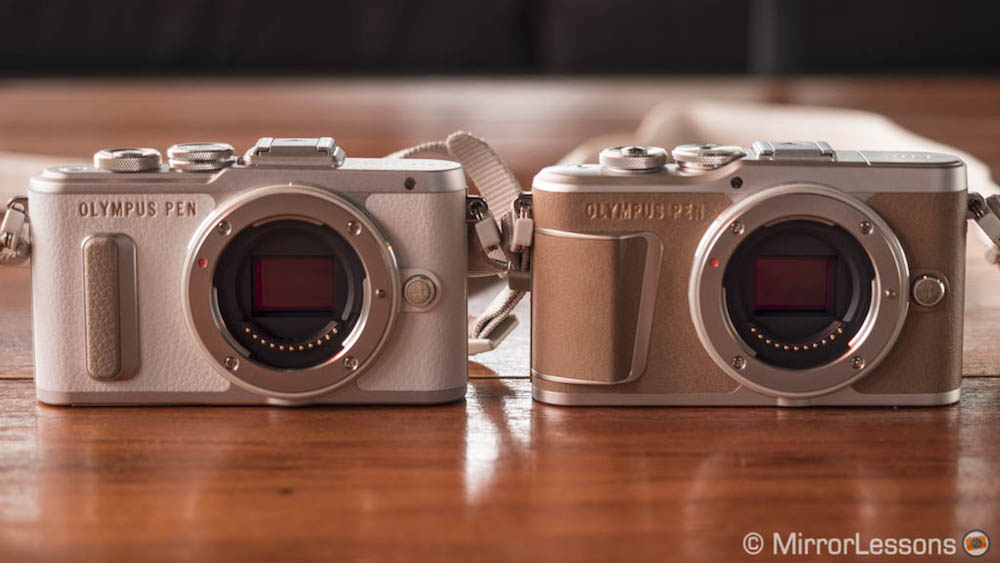 The Mode dial on top is also a little larger. 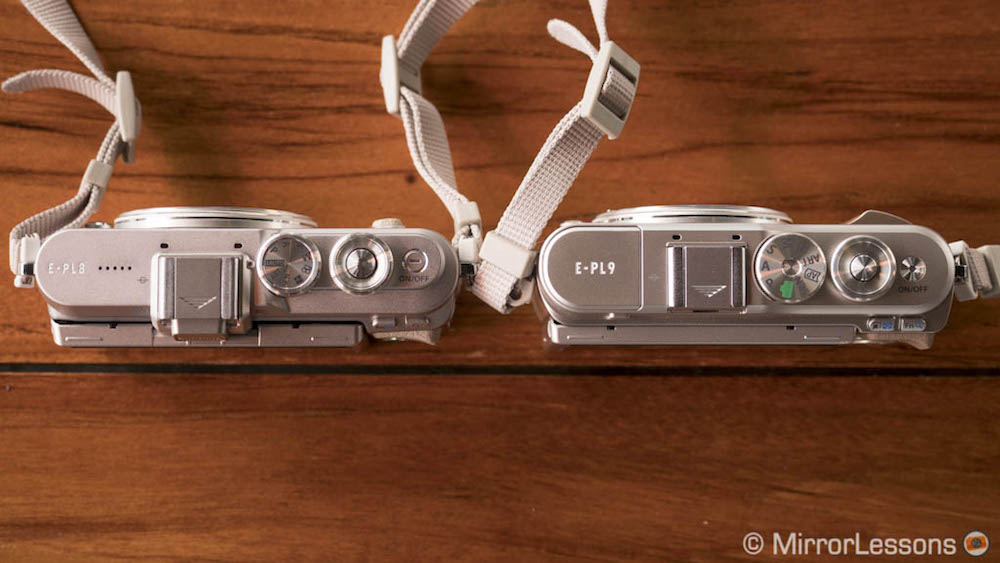 Because the accessory port below the hot shoe has been removed on the rear, you can no longer use an external electronic viewfinder with the E-PL9. 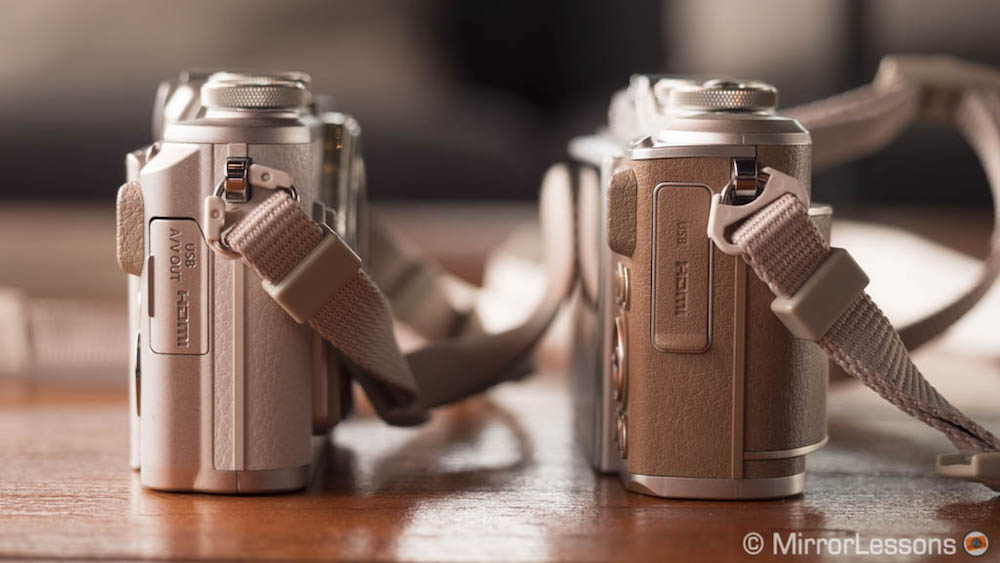 As for the colours, both come in silver with three faux leather cover options: black, brown or white. The only difference is that the shade of brown of the E-PL9 is lighter.

The Pen E-PL9 makes room for a built-in pop-up flash whereas the Pen E-PL8 comes bundled with a detachable flash unit. 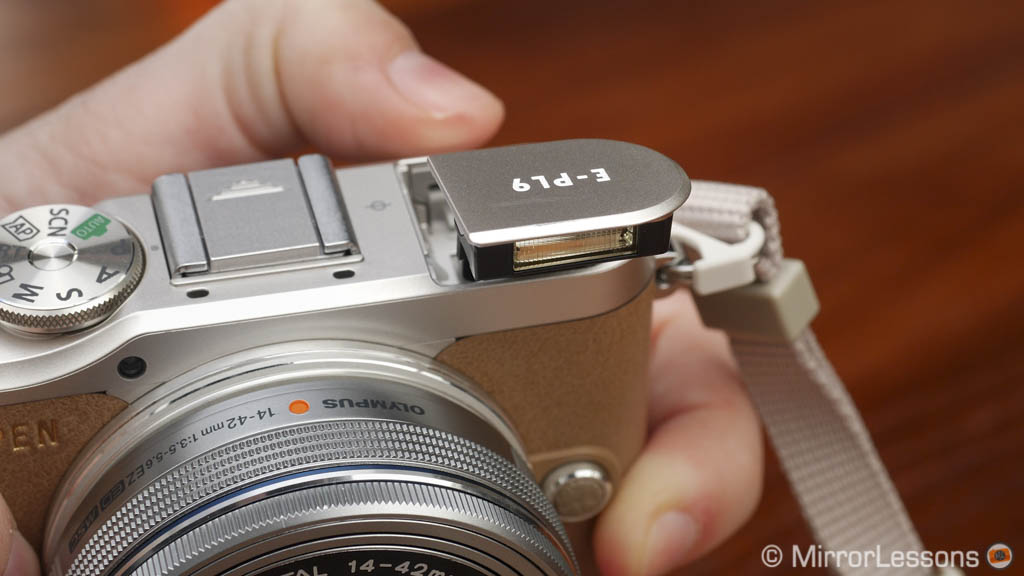 The Olympus RC mode, which can work with 4 channels and 4 groups, is present on both cameras. It uses the flash to trigger other units (optical communication). We have to say that we’re delighted to see that Olympus restored the RC mode on the E-PL9, as it was strangely omitted from the OM-D E-M10 III.

The E-PL9 has inherited Olympus’ re-designed menu system which is very similar to the one introduced on the E-M1 II give or take a few options.

In addition to a more minimalistic design, some options have been reorganised so that they are easier to access than before, such as the video settings. The interface of some shooting modes has also been updated to make them more intuitive for beginners.

You can also use the touch sensitive screen to select options such as the art filters and scene modes.

With the silent electronic shutter activated, you can now increase the shooting speeds of the E-PL9.

However, the buffer has a little less depth on the new model (14 RAW frames vs 20).

Second, whereas both cameras are limited to 1/4000s with the mechanical shutter, the E-PL9 can go as fast as 1/16000s with the electronic shutter.

Although the two cameras use the same 16MP Micro Four Thirds sensor, we should see some minor improvements to the out-of-camera JPGs thanks to the improved JPG engine and latest TruePic VIII image processor.

The E-PL9 also comes with two extra art filters in comparison to the previous model: the Bleach Bypass filter introduced with the E-M10 III and the brand new Instant Film filter, which is what Olympus calls “a nostalgic nod to the exaggerated colours of the early instant cameras”. 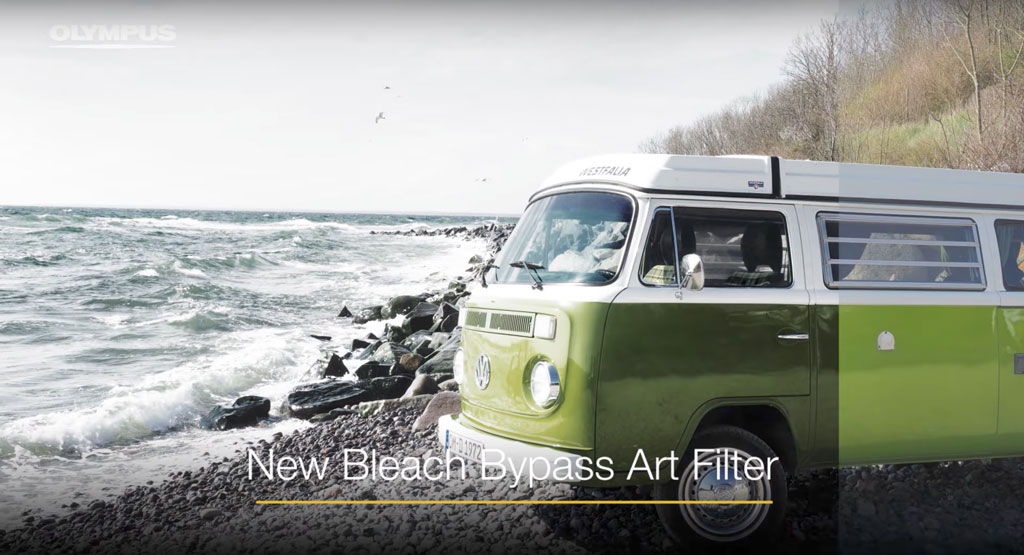 Unlike the E-PL8 which only had Wi-Fi connectivity, the E-PL9 combines Bluetooth and Wi-Fi for faster and simpler image transfer to smart devices even when the camera is “asleep”.

For example, if you want to see or import some images but the camera is inside your bag, all you have to do is open the OI.Share app on your phone and wake up the camera remotely.

At the time of writing, Bluetooth technology is exclusive to the E-PL9 model.

The E-PL9 comes with a few advanced features that aren’t found on the E-PL8, making it the more versatile model of the two. These are:

What’s more, a new set of easy access video “How To” guides are now hosted on the free OI.Share app.

Of course, what many of us care about more than anything is the price.

The Pen E-PL9, being the latest and most feature-rich model in the series, has a slightly higher retail price of £650 / €700 when bundled with the 14-42mm EZ kit lens. (The US pricing isn’t available at the time of writing.)

If your heart is set on an Olympus Pen camera but you aren’t sure whether to go for the E-PL8 or E-PL9, the good news is that there are only a few important differences to take into consideration.

In my personal opinion, the most important difference between the two cameras is the video quality. If you do a lot of vlogging, for example, you may find 4K resolution of the E-PL9 handy for cropping parts of your footage into Full HD.

Another factor you’ll want to consider is the built-in flash (or lack thereof on the E-PL8). Carrying around an external unit isn’t always convenient, so if you use flash on a regular basis, this difference could tip the balance.

Also worth considering is the fact that you cannot attach an external electronic viewfinder to the new model.

Finally, those who enjoy playing around with photography-related features will appreciate the extra options on the E-PL9, the most important being Bluetooth connectivity, Focus Bracketing and the Panorama mode. However, if you don’t care about these various upgrades, there is no reason not to go for the older model and put aside some money for a lens or accessory.

Check the price of the Pen E-PL9 on

Check the price of the Pen E-PL8 on