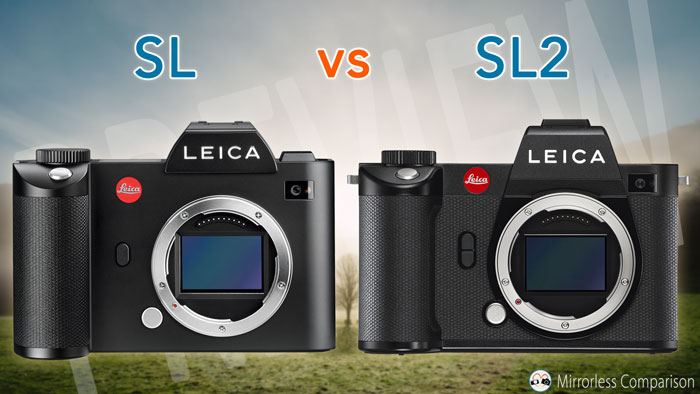 The original Leica SL (Typ 601) was launched in 2015 and was Leica’s answer to the professional mirrorless system. It featured a premium build quality, weatherproofing, two SD card slots and a fantastic viewfinder. The price, unsurprisingly, was prohibitive and uncompetitive compared to the many mirrorless models that came after it.

Four years later, Leica has joined the L-mount alliance with Sigma and Panasonic, which gives users access to more gear and lenses for L-mount camera users. The SL2 follows the release of the Lumix S1, S1R and S1H, as well as the Sigma FP, to become the fifth full frame model using the L-mount.

With a (slightly) more reasonable launch price, the SL2 brings some design upgrades, introduces new features to Leica users such as 5-axis stabilisation, and updates the sensor resolution, among other things. Let’s see how the original SL and the new SL2 compare.

Ethics statement: the following is based on our direct experience with the original SL and official information about the SL2. We were not asked to write anything about these products, nor were we provided with any sort of compensation. Within the article, there are affiliate links. If you buy something after clicking the link, we will receive a small commission. To know more about our ethics, you can visit our full disclosure page. Thank you!

Both cameras feature a full frame (35mm format) sensor with no anti-aliasing filter. The original SL has 24MP whereas the SL2 receives a new sensor with 47MP. It is similar to the one found on the Panasonic S1R, but the Leica version has a different micro lens design to maintain optimal image quality when adapting Leica M lenses.

Unsurprisingly, the SL2 gets the latest imaging processor, the Maestro III (the first SL uses the second generation engine).

Leica owners will be happy to know that you can finally turn off noise reduction for long exposures, a simple option that was missing from the SL Typ 601 despite its many firmware updates.

A first for a Leica camera, the SL2 includes 5-axis image stabilisation with up to 5.5Ev of compensation (CIPA rating).

This technology most likely comes from Panasonic, and we know first hand that it works really well on the S1R. Hopefully the performance will be similar. There is no mention of a Dual IS-like feature however (sensor + optical stabilisation working together).

Thanks to the sensor shift mechanism, the Leica SL2 can take high resolution exposures just like the Lumix S1R.

It can combine 8 frames to produce a 187MP file. The sensor is moved by half a pixel between each shot and, in addition to the increased resolution, colour resolution is enhanced because each point of the image is captured by at least one red, green and blue pixel.

Although this mode must be used on a tripod, the Panasonic S1R surprised us with its capability to deal with moving elements. Normally when combining multiple images, any movement in the frame results in artefacts (moving leaves on a tree for example). The S1R’s powerful algorithm analyses the image and replaces any moving parts with a low res version taken from one of the single frames captured.

Leica hasn’t mentioned anything along these lines so we’ll have to see if the SL2 has similar capabilities or not. Perhaps the German brand will unveil more details when this Multishot mode becomes available next year via firmware update.

Both cameras use a contrast detection AF system. The original SL uses an old version with 49 points. The SL2 has 225 points and a new software the increases the performance and implements new features.

Leica mentioned a new Object Detection AF which is capable of detecting a human body, as well as face and eyes if the subject is closer. The new camera can switch automatically from single to continuous autofocus if it detects the subject moving (Smart AF mode).

There is no mention of animal detection, a feature found on the Panasonic S series, nor does Leica mention DfD autofocus which is Panasonic’s advanced contrast detection system. Object Detection AF is similar to the capabilities of the S1 and S1R in that it can also recognise an entire human body, so it is likely that the SL2’s autofocus finds its origin in Panasonic’s technology just like the original SL AF most likely did.

The SL Typ 601 can shoot up to 11fps, but if you want focus priority, the speed decreases to 6fps.

The SL2 increases the drive speed to 10fps, or 20fps if you switch to the electronic shutter. This is possible while keeping the full resolution of 47MP which is quite impressive, although the bit depth probably decreases. If you want focus priority, it won’t go faster than 6fps.

The SL was Leica’s first serious attempt at making a competitive camera for video. It could record up to 4K / 30p with full pixel readout and no crop, included slow motion capabilities up to 120fps in Full HD, 10-bit 4:2:2 HDMI output, and pro settings such as the S-Log V gamma curve.

The SL2 pushes the specs further, and I would say surprisingly further with some features not seen on many other full frame cameras.

There is 4K of course, but this time up to 60fps without a crop. If 4K is not enough, there is a 5K mode that works up to 30p but crops the sensor.

Video can be recorded in 10-bit internally in addition to the HDMI output. There is a new L-Log profile and a HLG Rec 2020 profile.

The SL2 features built-in mic and headphone connections (3.5mm type), so you don’t need the special AA-SCL4 audio adapter as with the SL.

Both cameras have a full sized HDMI port.

The original SL sported one of the best EVFs at the time of its release. It was large (0.66-in) with a magnification of 0.8x and a resolution of 4.4M dots, the highest at the time. The refresh rate was 60Hz.

The SL2 EVF gets an upgrade in resolution with 5.76M dots. The magnification is slightly smaller (0.78x) but the refresh rate goes up to 120Hz.

Both cameras have a fixed LCD screen with touch sensitivity. The one on the SL2 is larger (3.2 vs 3.0-in) and has more resolution (2.1M vs 1.3M dots). Touch sensitivity is said to have been improved on the new camera. It’s a shame they didn’t take the opportunity to make the screen tiltable or multi-angled.

On top, both cameras feature a 1.28” monochrome LCD panel where you can check various settings at a glance.

The SL and SL2 are similar when it comes to size and weight, but Leica has brought several changes to the new camera.

The SL2’s edges have been rounded out, fixing one of the main complaints about its predecessor. The grip has been re-modelled to improve comfort when working with the camera hand-held.

Both models feature a premium high quality all-metal construction with weather sealing, but the latter has been improved on the SL2 with an IP54 certification.

The button layout has changed: instead of the four large “nameless” buttons around the LCD screen, you get the three button layout found on recent Leica cameras. On front there are now two custom buttons.

Both cameras have two slots for SD cards. The SL Typ 601 has one slot with UHS-II speed, whereas the SL2 uses UHS-II cards in both slots.

The battery unit is the same but the SL2 has a lower rating than the original SL: 370 images instead of 400 on the first model (CIPA).

The SL2 has a USB Type C connector (as opposed to a USB Type B port on the original SL). The new camera can be charged via USB or powered while in operation.

Both models have Wi-Fi capabilities. The SL2 gains Bluetooth connectivity but loses built-in GPS, which means you have to connect to the Leica Fotos app to record location data.

The SL Typ 601 is already discontinued in some stores. It was launched at $7500 which was quite expensive but it then slowly decreased to about $6000. On certain websites it can be found for less, probably with the intent to clear the final stock.

I’m not going to dive into the usual argument about the price of Leica products. They are expensive: always have been, always will be. They have their niche market and don’t really give me the impression of wanting to compete with the Sony A7 or any other full-frame series.

Cost aside, does the SL2 offer something really appealing? I can certainly believe that the build quality will be top of the class. I’m glad they’ve introduced features such as 5-axis stabilisation, and pushed the video specs further than ever before. It is a sign that the brand wants to offer a more complete package to its customers.

The L-mount alliance means that SL2 users will be able to adapt Sigma and Panasonic lenses. Now Leica is famous for its expensive but superb optics, so to buy an expensive Leica body only to mount an affordable Sigma lens might seem odd to Leica users. But then, for a system that is supposed to be super professional, it is strange to not find even one constant aperture zoom in the range. So perhaps mixing lenses from different brands can be beneficial.

Check price of the Leica SL on
Amazon

Check price of the Leica SL2 on
B&H Photo