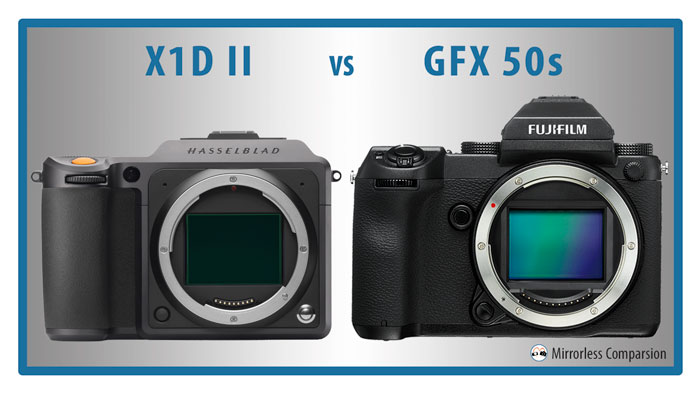 Hasselblad has announced the X1D II, the successor to the original X1D that inaugurated the brand’s mirrorless medium format system back in June 2016. The new camera isn’t revolutionary but it does improve the viewfinder and monitor resolution and promises a faster operating system.

The GFX 50s was Fujifilm’s first mirrorless medium format product, released in the same year as the X1D. The system has since expanded to include three models (the 50s, 50R and 100) but the 50s remains the most natural competitor for the Hasselblad, especially now that the Swedish brand has decided to cut the price of the X1D II to make it more competitive.

Three years ago we wrote a comparison preview between the original X1D and the GFX 50s. Today we decided to update that article with this new post to see how the X1D II compares to Fuji’s first medium format camera.

Before proceeding any further, here is a quick list of the various things the two products have in common, and some of them are quite important:

Ethics statement: The following is based on our personal experience with the GFX 50s and official information found on the Hasselblad website. We were not asked to write anything about these products, nor were we provided with any sort of compensation. Within the article, there are affiliate links. If you buy something after clicking the link, we will receive a small commission. To know more about our ethics, you can visit our full disclosure page. Thank you!

1. Design and ease of use

Each product has its own distinctive design. The X1D is slimmer whereas the GFX 50s is larger and heavier, with an extra depth of around 2cm.

The X1D II has an elegant and modern design that feels meticulously crafted. I have to be honest, I’ve loved it since I saw the original version back in 2006. The precise lines, the mix of black and charcoal, and details such as the yellow shutter button give the camera a unique and refreshing look. I’m glad Hasselblad hasn’t changed the formula on the new model.

The Fuji camera looks chunkier and has a more traditional look by comparison. You can tell that the brand’s first priority was to make the camera functional. You find various exposure dials such as shutter speed and ISO as well as 5 function buttons, the Quick menu and an AF joystick among other things. There is also a small LCD monitor on top.

The X1D II’s modern design doesn’t include as many controls as the GFX but you still get a good range including WB, ISO and AF/MF buttons, three custom modes on the main dial and 5 buttons at the rear. The camera also relies on the touch screen to execute various operations.

The X1D II has a non-removable EVF with 3.69 million dots, which is a welcome improvement over the first version. The magnification is 0.87x and the live view refresh rate has been extended to 60fps.

The GFX 50s has a removable EVF and is compatible with an optional accessory, the EVF-TL1 tilt adapter, that allows you to tilt up and rotate the finder in different positions. The resolution and refresh rate are the same (3.69M dots, 60Hz) but the magnification is slightly lower at 0.85x.

The rear LCD is another improvement on the X1D mark II. It now has a 3.6-in TFT screen with 2.35 million dots. Unfortunately it remains fixed with no possibility to tilt it up or down.

The GFX monitor has the same resolution but is a bit smaller (3.2-in). You can tilt it up, down and to the side however, just like on select Fuji APS-C cameras.

Both products feature touch screen capabilities. You can move the focus point, take a shot or swipe through your images in playback mode. On the GFX you can change settings in the Q menu, but the X1D interface has been designed to be entirely interactive which means you can also navigate through the menu.

The shutter mechanism is also different. The Hasselblad uses a leaf shutter which is located inside the lenses (XCD and H types). This solution allows you to sync flash at all speeds.

The GFX has a focal plane shutter and the maximum flash sync is 1/125s.

Both cameras have an electronic shutter option: on the X1D it raises the maximum speed to 1/10,000s whereas the Fuji goes a bit faster to 1/16,000s

The X1D II has received an ever so slight boost to its burst speed, and can now go as fast as 2.7fps (the original model topped out at 2.3fps).

The GFX 50s can shoot up to 3fps which is only marginally better.

One small difference in image quality concerns the ISO sensitivity.

One other advantage the X1D II has compared to its predecessor is the possibility to charge the camera via the USB Type C port. The GFX model doesn’t offer USB charging by comparison.

The NP-T125 battery of the GFX is rated at 400 frames per charge (CIPA). Hasselblad hasn’t disclosed the battery life of the X1D II.

It is also worth pointing out that an optional battery grip is available for the Fuji model.

It is not uncommon nowadays for brands to give their customers extra tools to edit their images.

With the X1D II, Hasselblad has introduced Phocus Mobile 2, an app for the iPad Pro and iPad Air (2019 models) that allows you to import and edit RAW files. It can work via USB or Wifi connection. The software supports tethered shooting and allows you to remotely control the camera.

Fujifilm offers desktop apps for tethering (X Acquire) and RAW processing (X Studio). On your mobile phone or tablet, you can use the Camera Remote app but it doesn’t allow you to work via USB or transfer and edit RAW files.

Hasselblad has a selection of 9 native lenses (8 primes and 1 zoom) designed for the X1D II. From the ultra wide 21mm (17mm equivalent) to the medium telephoto 135mm (108mm equivalent), the XCD catalogue offers a good selection for landscapes, architecture and portraits. A 1.7x converter is also available for the 135mm lens.

The GFX system has grown as well, now consisting of 8 lenses (two zooms and 6 primes). It doesn’t offer an ultra wide option like the X1D (the closest is the 23mm f4 which is an 18mm equivalent) but it provides more reach with its telephoto lenses thanks to the 250mm f/4 (200mm equivalent) and its optional 1.4x teleconverter. A macro lens (120mm) is available for both systems.

Of course more lenses will follow and you have the option of adapting lenses from other systems as well.

The X1D II is being launched at the retail price of $5,750 (body only) which is a significant cut from the previous model, which was introduced at nearly $9k in 2016.

The GFX 50s can be found for around $5500 which makes it a bit less expensive but keep in mind that it has been around for longer.

One important thing to point out however is that the native XCD lenses tend to be more expensive than the Fujifilm GF lenses. A quick comparison of similar products (wide angle, zoom and portrait lenses) reveals that the Hasselblad versions are almost as twice as expensive, if not even more. So the GFX system is more affordable as a whole.

Hasselblad’s decision to slice the price of the X1D II was smart because it makes the medium format segment more competitive than ever. Obviously we have Fujifilm to thank for that first and foremost, but it is nice to see a legendary brand like Hasselblad decide to fight back.

I really like the X1D II’s design and, coupled with some of the most compact native lenses, it becomes a portable tool capable of delivering exceptional image quality.

But despite the efforts of the Swedish company, I still see the GFX system as a more interesting alternative.

First the lenses are less expensive, which means that in the long run, you’ll save a considerable amount of money by choosing the GFX. Second, Fujifilm now offers three cameras. The GFX 50R is even cheaper than the 50S whereas the GFX100 has taken the market by storm thanks to the introduction of features such as phase detection AF, 5-axis stabilisation and 4K video.

Overall, it seems that the Fuji GFX system is growing at a faster pace and with more determination to change the medium format market than the X1D system, but who knows – that may change in the future!

Check price of the Hasselblad X1D II on B&H Photo

Check price of the Fujifilm GFX 50s on B&H Photo