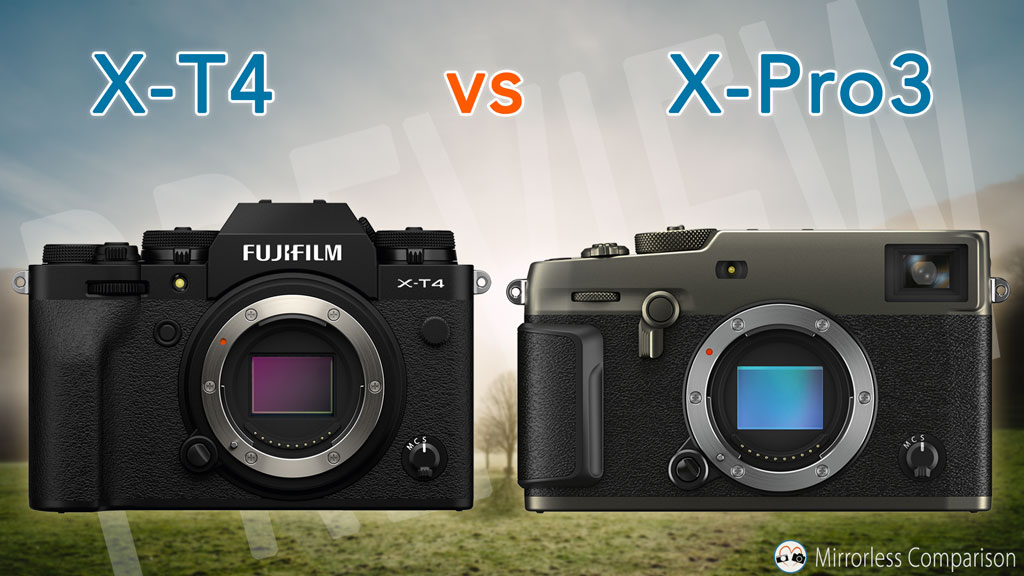 Despite the X-Pro1 being Fujifilm’s very first flagship, the X-Pro series as a whole has become increasingly niche over the years, most notably since the arrival of the X-T1 and its successors. These days, if the company comes out with an important new feature, it will generally be bestowed upon an X-T model first whereas a few years ago, the opposite would have been true.

This is exactly what has happened with the X-T4, the fourth iteration in the high-end X-T series and the company’s most powerful mirrorless camera to date. If you are curious to find out all the differences between the X-T4 and the most recent X-Pro model, the X-Pro3, then keep on reading – there’s a lot to cover!

Ethics statement: this article is based on official information and our experience with the X-Pro3. We were not asked to write anything about these cameras, nor were we provided any compensation of any kind. Within the article, there are affiliate links. If you decided to buy something after clicking the link, we will receive a small commission. To know more about our ethics, you can visit our full disclosure page. Thank you!

The very first difference that will catch your eye is the body design of the two cameras. From the very beginning, the X-T series has embraced an SLR-like design with a protruding electronic viewfinder at the centre, while the X-Pro series is known for its flat-topped styling with the viewfinder on the right-hand side of the body.

The X-Pro3 isn’t as deep, heavy or tall as the X-T4 but it is longer as you can see from the measurements below:

On the X-T4, the Fujifilm logo and camera is written prominently across the front whereas on the X-Pro3, the logo is in a more discreet position on top.

Both sport a hot shoe on top, an AF joystick on the rear and various function buttons around the body. However only the X-T4 retains the four-way control pad on the rear.

The frame of the X-Pro3 is made from magnesium, while the top cover and the base plate are made from corrosion resistant titanium. There are also two Duratec versions with a special coating which increases the resistance against scratching. This makes for a total of three different colour versions for the X-Pro3 (Black, Dura Black and Dura Silver).

The X-T4 is constructed primarily from magnesium alloy and is available in black or silver.

The screen of the X-Pro3 naturally faces inwards, which is supposed to encourage you to use the viewfinder more often and concentrate on shooting rather than constantly reviewing your images and tweaking your settings. That said, there is the option to pull it down, which is helpful for low-angle shooting.

When the viewfinder is in the closed position, a secondary LCD display lights up, showing you your basic shooting settings or the film simulation you’re currently using in graphic form.

The more video-friendly X-T4 has been given a traditional multi-angle LCD screen that flips out to one side via a hinge and rotates 180 degrees.

Otherwise the two screens are quite similar. Both are 3-inch types with a 3:2 aspect ratio, 1.62 million dots of resolution and 100% coverage. They offer touch sensitivity, allowing you to perform various operations such as taking a shot, moving the focus point, and selecting specific settings.

The advantage of the OVF is that the brightness, colour and contrast of the scene is exactly as you see it with your naked eye, not to mention the complete absence of any delay. The EVF on the other hand previews how the picture will look depending on the settings selected in-camera. If you are shooting in Black & White for example, you can preview the scene in monochrome.

Finally, the ERF allows you to check things like the focus point while composing with the optical viewfinder.

The X-T4 comes with a larger eyecup than the X-Pro3 which makes it more comfortable to hold up against your eye for long periods of time, and can shade your eye more from external light.

The X-T4 is only the second camera after the X-H1 to offer 5-axis in-body stabilisation. All other cameras, including the X-Pro3, rely on the optical stabilisation of select Fujifilm X series lenses.

When used with 18 out of the 29 existing XF lenses, it offers up to 6.5 stops of compensation. Otherwise it compensates between 6 and 5 stops.

You can also use the stabilisation system for video shooting. The DIS (Digital Image Stabilisation) improves the stabilisation even more (albeit with a 1x1 crop) and the IS Boost mode stabilises fixed shots more effectively when you’re not using a tripod.

The X-T4, with its maximum continuous shooting speed of 15fps with the mechanical shutter, has a marked advantage over the X-Pro3 which is limited to 11fps. Note that AF/AE tracking is available at this speed on both cameras.

Switch over to the electronic shutter however and the maximum speed soars to 30fps with AF/AE on both models, albeit with a 1.25x crop factor that pushes the resolution from 26MP down to 16.6MP. And if that weren’t enough, you also get a blackout-free live view of your scene at this speed! To avoid the crop, you must reduce the speed to 20fps.

The shutter of the X-T4 has a rating of 300,000 actuations, while the X-Pro3 rating is unspecified.

According to the official specifications, the buffer memory is similar. For example at 20fps, they can both record 79 JPGs or 36 lossless compressed RAW files, or 114 JPGs and 37 RAW with the crop mode.

In line with the trend of producing bigger and longer lasting batteries for mirrorless cameras, the X-T4 comes with the new NP-W235 which promises 600 frames in Eco mode and 500 frames in Normal mode on one charge.

This is a good improvement over the NP-W126S battery found on all the most recent Fujifilm models including the X-Pro3. In Normal mode with the EVF, you can expect 370 frames versus 440 frames with the OVF.

Of course in the real world you can get higher numbers than this. The new battery will also be helpful when shooting video, which is one of the main characteristics of the X-T4. It can manage about 85 minutes of actual recording time in 4K, versus 45 minutes on the X-Pro3.

The X-T4 has an updated algorithm that improves the tracking capabilities by analysing colour and shape in addition to distance. Fujifilm claims a locking speed of 0.02s on the body, which is the fastest of any X model.

Otherwise the technology inside the two cameras is the same: they both have a hybrid system with contrast and phase detection points (117 or 425 areas). This means that the X-Pro3 could receive some of the new software improvements via firmware later on.

Both cameras have a low light sensitivity rated at -6Ev. They feature various AF modes including Face and Eye Detection, which has been improved over previous generation of cameras.

The X-T4 introduces a new Film Simulation Mode called Eterna Bleach Bypass, bringing the total number up to 18. According to Fujifilm, it gives both film and stills a more artistic look, with images having reduced saturation and increased contrast.

As of now, the X-Pro3 doesn’t have this mode but I wouldn’t be surprised if it comes via firmware update at some point.

A few other tweaks include: a new White Balance and Ambiance priority setting, highlight/shadow control in 1/2 steps rather than 1, a Compressed option in RAW settings and the possibility to export 8-bit and 16-bit TIFF files in addition to JPGs using the built-in RAW Converter. None of these options are available on the X-Pro3 but could potentially come via firmware update.

The X-Pro3 benefits from some of the same video capabilities as the X-T4, but the latter is the more advanced model by far.

First, let’s take a quick look at what they share:

However the X-T4 can do so much more:

Although we’ve yet to compare the two cameras side-by-side, I believe that my conclusion will be the same as all the others we’ve written for articles that compare X-T with X-Pro models.

The X-Pro3 is a niche product that aims to please certain kinds of photographers: those who love street photography or reportage for example, or those who like the idea of a camera designed around a more pure approach to photography. It may not have all the advanced features of the X-T4 but this doesn’t matter because its appeal lies elsewhere.

The X-T4 on the other hand will certainly whet the appetite of the mass market, specifically those in need of a powerful hybrid camera that can do almost anything. Being such a well-rounded model, it can suit a landscape or wildlife photographer just as well as a videographer.

Whether you choose one or the other ultimately depends on what kind of photographer you believe yourself to be!

Check price of the Fujifilm X-T4 on
B&H Photo

Check price of the Fujifilm X-Pro3 on
B&H Photo