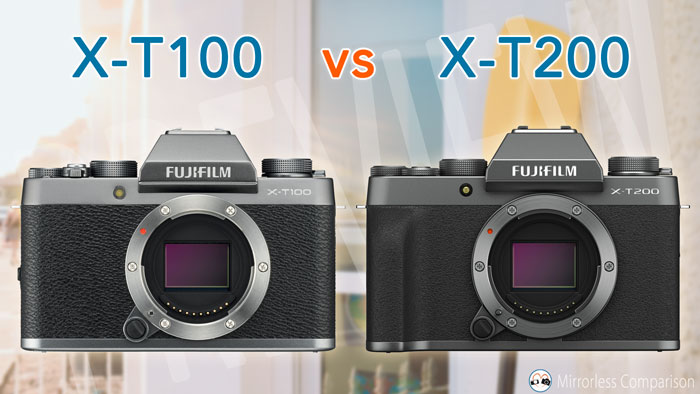 The X-T100 was an entry-level model designed to be a compact, affordable and approachable option for those considering an upgrade from smartphone photography. It retained the classic styling and many of the much-loved features of other X Series cameras but suffered from laggy autofocus performance and disappointing 4K video specifications.

Its recently announced successor, the X-T200, inherits the design of the X-T100 (plus or minus a few tweaks) while incorporating some new features present on the flat-topped entry-level model, the X-A7. Let’s take a look at all the main differences now!

Ethics statement: the following is based on our direct experience with the X-T100 and official information about the X-T200. We were not asked to write anything about these products, nor were we provided with any sort of compensation. Within the article, there are affiliate links. If you buy something after clicking the link, we will receive a small commission. To know more about our ethics, you can visit our full disclosure page. Thank you!

The X-T100 was lacking the sculpted handgrip found on many X Series models, although a detachable handgrip was provided in the box. When I tested the camera back in 2018, I hardly ever used it without the grip attached as the surface was too slippery without it. Thankfully the X-T200 regains the more traditional built-in grip.

Turning to the back, we can see that the four-way directional buttons have been replaced by an AF joystick. The buttons on the rear have also been rearranged, giving the camera a more minimalistic appearance.

The new camera now has twin dials on top, whereas the older model had just one dial and a smaller recessed dial on the rear.

Whereas the older camera had a micro USB terminal, the new model has been upgraded to a USB Type C connection.

One final difference is that the new camera is significantly lighter than the previous model (370g versus 448g with the battery and memory card).

Although both cameras house an APS-C Bayer sensor with a resolution of 24.2MP, the X-T200 has an updated version that promises less rolling shutter thanks to the use of copper wiring (rather than aluminium) which increases the readout speed by 3.5 times. It also features more phase detection AF coverage which we’ll discuss in the autofocus section below. It is the same sensor found inside the X-A7.

Whereas the autofocus performance of the X-T100 left much to be desired, the X-T200 should now perform at the same level as models such as the X-T30 and X-T3.

In addition to having a more advanced phase detection AF system with 425 points up from just 91 on the X-T100, it also offers more reliable face and eye detection thanks to the latest software algorithm. When detecting multiple faces, there is the option to prioritise a specific subject. Continuous autofocus for video is now more reliable as well.

The rear LCD screen of the X-T100 had a unique design in that you could swivel it up, down or out to one side for vlogging purposes.

With the X-T200, Fujifilm has gone with a more traditional fully articulating solution where the screen flips out to the left side via a single pillar hinge and rotates -90 to +180 degrees.

Also updated is the size and ratio of the screen. It is now slightly bigger at 3.5 inches (up from 3 inches on the X-T100) and it swaps the 3:2 aspect ratio for a more video-friendly 16:9 aspect ratio. The resolution is also higher at 2,760k dots versus just 1,040k on the previous model.

There is also more you can do with the touch screen of the X-T200. For example, you can touch the menu to select options and change more settings via the new simplified menu inherited from the X-A7.

Despite having a decent Full HD 60fps option, the maximum frame rate of the X-T100 in 4K was a measly 15fps. This made it completely unusable for serious video purposes.

The new X-T200 remedies this flaw by providing 4K at 24 and 30fps. It records without cropping the sensor and with oversampling, whereas the X-T100 performs line-skipping. However the maximum recording time in 4K is limited to 15 minutes (it’s 30 minutes on the X-T100 but of course it records at just 15fps).

In Full HD, the new camera goes up to 60fps and you can film for up to 30 minutes. With the High Speed mode, the X-T200 goes up to 120fps and the slow-motion footage is conformed in camera (meaning no sound is recorded).

A few new additions for video include the Digital Gimbal Mode (electronic stabilisation) which uses the camera’s gyro sensor to improve the results ( 1080p only), the HDR video mode which captures a wider dynamic range, and the Movie Trimming mode which lets you trim movie clips in-camera.

As mentioned above, the updated phase detection AF is compatible with video as well, allowing for smoother and more reliable focusing.

Another key upgrade on the X-T200 is the 3.5mm microphone input and USB/headphone adapter provided in the box. The previous model only had a 2.5mm input (which required an adapter) and no option for a headphone output option at all.

The X-T200 menu is identical to that of the X-A7. It has received the new My Menu, as well as a new simplified Smart menu which is more icon-based than text-based and allows you to preview how you’ve adjusted your shooting settings in real-time. It also allows the user to select options in the menu using the touch screen.

If you’re into gimmicks, you might enjoy the Light Trail scene mode which lets you capture long exposures of moving lights for light painting. The X-T200 inherits this mode from the X-A7 model.

Being a brand new model, the X-T200 is approximately $200 US more expensive than its predecessor at $799 US. Considering all the features on offer, this is a very reasonable price point for a budget camera.

Speaking as someone who used the X-T100 intensively for two weeks and had very mixed feelings, I am very pleased with the upgrades Fujifilm has brought to its successor.

By inheriting the snappy autofocus system of the mid-range models, this camera will become a more capable option for subjects in constant movement such as your child or pet, and the addition of 30fps in 4K will hopefully wipe the X-T100’s laughable 4K/15fps option from our collective memory!

I’m also delighted with the new joystick, the built-in grip (which never should have disappeared in the first place) and the improved usability of the LCD screen.

Were I a beginner in search of my first serious camera, the X-T200 would be high on my list of choices.

Check price of the Fujifilm X-T200 on B&H Photo