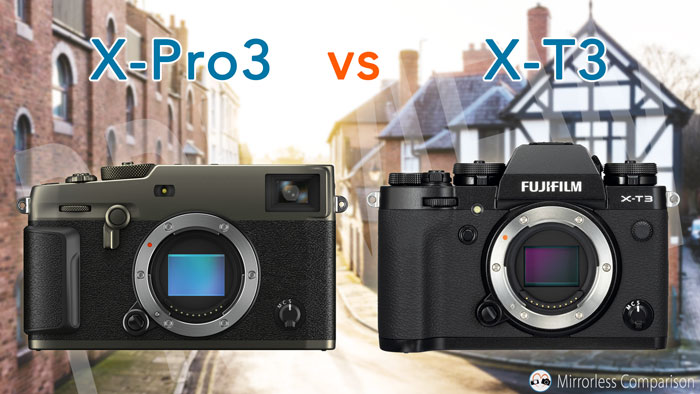 Over the years, the Fujifilm X-T3 has become more popular and generated more sales than the original flagship series, the X-Pro line-up. Although the company has given both the flagship label, the X-Pro has become more of a niche product for photographers who enjoy its unique features.

If previously, it was the X-T model that inherited new technology after the X-Pro camera, this time it is the other way around. Fujifilm released the X-T3 in 2018 and gave it all the best features in the brand’s arsenal, not only for stills but also video, whereas the X-Pro3 arrives one year later. It has the same sensor, but introduces a few unique ideas when it comes to design.

Ethics statement: the following is based on our personal experience with the X-T3 and official information about the X-Pro3. We were not asked to write anything about these products, nor were we provided with any sort of compensation. Within the article, there are affiliate links. If you buy something after clicking the link, we will receive a small commission. To know more about our ethics, you can visit our full disclosure page. Thank you!

The X-Pro3 introduces an updated autofocus algorithm, new settings for the image quality, a new film simulation mode and other minor tweaks. Since the two cameras utilise the same sensor and image processor, it is likely that these new features will make it to the X-T3 via firmware update. It is a recurring strategy and has happened many times before with previous camera generations.

The most relevant difference between these two cameras is the design – or more precisely the location where the viewfinder is found. The X-Pro3 has a rangefinder design with the viewfinder on the left inside the main body frame.

The X-T3 embraces the SLR style with a central viewfinder protruding from the top. This means that the camera is taller overall. It is also heavier than the Pro model.

Both cameras are weather sealed and have have a magnesium alloy chassis. On the outside, the X-Pro3 is covered with titanium to make the camera stronger. The Dura Silver and Dura Black versions feature an additional coating to make the camera scratch-proof.

The X-T3 is available in black or silver, but there isn’t a special / limited edition version like the previous X-T2.

The X-T3 has more dials overall than the X-Pro3. Below the ISO and shutter speed dials, you find two embedded dials to control metering or choose a shooting mode (single, continuous, video etc.).

On the rear, both feature an AF joystick but the X-Pro3 lacks the D-Pad, so you need to use the joystick to navigate the menu.

The Q button, present on both cameras, allows you to display 16 blocks on the screen to quickly change settings (they can be customised). New to the X-Pro3 is the ability to reduce these blocks to 12, 8 or 4 if you don’t need to see too many settings.

The cameras use the same battery, the NP-W126S. The X-Pro3 has an advantage when using the optical viewfinder, as its rating becomes 440 frames. When using the electronic viewfinder, it is lower at 370 shots, which is similar to the 390 images on the X-T3. Note that in real life, you can get more out of your camera than these figures suggest.

One advantage of the X-T3 is that Fujifilm has designed a dedicated battery grip for the camera that can house two batteries.

Both cameras can be charged via USB with the USB Type C port.

The OVF has a magnification of 0.52x and displays bright white frames to show you the actual field of view of the lens used. It can correct parallax in real time, a useful feature to have since what you see through the optical viewfinder is not exactly the same as what the lens/sensor sees.

The advantage of the OVF is of course a very bright and lag-free view of your scene, as well as the benefit of seeing outside your frame (from 23mm or longer).

The ERF adds a small screen in the OVF so that you can check focus magnification for example.

If you don’t fancy the optical view, you can switch to the electronic viewfinder which has 3.69M dots of resolution and a magnification of 0.66x.

The X-T3 only has an electronic viewfinder. It shares the same resolution but has a larger magnification of 0.75x.

The EVF on both cameras use an OLED panel and can work at a refresh rate of 100fps when the Boost mode is activated. The X-Pro3 has an extra setting called Smoothness Priority: a black frame is inserted between frames to reduce motion blur.

The X-Pro3 introduces a new concept to the rear screen, which is without a doubt Fujifilm’s most audacious move to date.

When you pick the camera up, all you see at the back is a small square monitor. It displays various settings just like many top LCD screens do on other cameras. Here however, you can also choose a classic coloured view where the camera displays the film simulation mode in use with a graphic interface that is reminiscent of 35mm film packaging. ISO and WB settings are also displayed with this mode.

If you want a proper LCD screen, you need to open it by pulling down the monitor. It can tilt down to 180˚ but the unique mechanism doesn’t allow it to be front facing. The screen has a good resolution of 1.62M dots and is touch sensitive.

The X-T3 may not feature the same nostalgic design, but it has a more useful screen in my opinion: the rear LCD can tilt up, down or to the side by approximately 70˚, which is useful when composing vertically. Unlike the X-Pro3, you can’t hide it unless you put some black tape on it! (or simply deactivate it, or deactivate live view and display the settings used instead).

The X-T3 LCD is touch sensitive as well, and you can use the same gestures on both cameras: take a shot, move the focus point, flick left, right, up or down to activate a setting, as well as navigate the Q menu.

Since the sensor and image processor are the same, we need to dig into the image quality settings to see what’s new.

First we have a new film simulation mode (Fuji’s colour profile). It is called Classic Neg and emulates the company’s own Superia 400 film.

Then we have the Black and White adjustments. On the X-T3 you can warm or cool the tint, whereas on the X-Pro3 you have more freedom to choose any colour tint you like with the colour matrix slider.

The Pro model has a new Clarity setting, and a new Tone Curve adjustment that incorporates the highlight / shadow setting found on the X-T3.

The grain effect can now be controlled not only with the Weak and Strong level, but also with a new Size setting.

Then we have the Colour Chrome Effect that produces deeper colours and tonal gradations when activated. The X-Pro3 has a new Colour Chrome Blue option that, as the name suggests, increase the vividness of blue tones.

Note that all these settings mainly apply to the JPG files. As I said in the introduction, it is likely that these new functions will arrive on the X-T3 via firmware update.

The X-Pro3 and X-T3 have a set number of identical extra functionalities, including focus bracketing. This function on the X-Pro3 has a new Auto mode where the camera selects the number of frames to record automatically once you’ve set the starting and ending point.

Then we have the new HDR mode, which combines several frames into one to create an image with more dynamic range, while maintaining a natural look according to Fujifilm. It can work hand held and Fujifilm has implemented some computational photography for a more in-depth analysis and better results.

Then we have the multiple exposure mode, which exists on the X-T3 in its simplest form: you can take 2 pictures, and that’s about it. On the X-Pro3, you can take up to 9 photos, and choose different merging modes: Additive, Average, Comparative Bright or Comparative Dark.

The two cameras share an identical autofocus system, with 117/425 phase detection points that cover 99% of the sensor area, as well as an improved face and eye detection mode.

The X-Pro3 gets the latest software update, which improves low light sensitivity to -6Ev with a 1.4 aperture. The X-T3 by comparison has a rating of -3Ev. The aperture is not specified for the T model.

The X-Pro3 inherits some of the video capabilities of the X-T3, but the latter remains the most advanced model.

First, let’s see what they share. Both cameras can:

Now the X-T3 is, unsurprisingly, the most logical choice for video makers because it can do much more, such as:

Another advantage of the X-T3 is the recording time, which is capped at 30 minutes per clip at all formats, except 4K/60p, where it stops after 20 minutes.

Finally, the X-T3 features 3.5mm audio in and out, which are easier to deal with than the 2.5mm mic input and USB C headphone output on the X-Pro3 (both of which require an adapter).

As always, keep in mind that these prices are those available at the time of publishing this article. They can (and most likely will) change over time.

There isn’t really a lot to say about these two cameras, just as there wasn’t a lot to say when I compared the X-T2 and X-Pro2.

The technology is the same. The X-T3 is the weapon of choice if you’re looking for advanced video features, or if you prefer its centrally placed EVF, don’t care about the optical viewfinder, and want a rear LCD screen that can move on multiple axes.

The X-Pro3 gives you a different shooting experience. Not everybody will like the optical viewfinder, but there is a group of photographers who love it, and that is why Fujifilm keeps the series alive. The hidden LCD screen is an interesting concept. Perhaps it wasn’t really necessary, and it probably isn’t the most versatile solution, but it might just be the cherry on top for those willing to try something different, with a pinch of nostalgia. At the very least, it gives us something different to talk about.

Check price of the Fujifilm X-Pro3 on
B&H Photo