Of all the interchangeable lens cameras in Fujifilm’s X series, the most popular are those in the X-T range. Two such examples are the flagship X-T2 and mid-range X-T20. However, the X-T cameras all come at a certain price, which could dissuade beginners or those on a budget from making the investment.

This is one of the primary reasons Fujifilm also manufactures the X-A series of entry-level cameras. They provide some of the features seen on the X-T models at a less prohibitive price, making them the ideal choice for newcomers to photography.

The latest model in the X-A range is the X-A5. If you’re wondering what the main differences are between this new camera and the X-A10, you can find all the answers below!

NOTE: Along with the X-A5, Fujifilm also announced the X-A20, which is essentially an X-A10 with a touch sensitive screen and an extra body colour (mint green). Since the X-A20 product page only appears on the Fujifilm China website, we can assume it has been designed specifically for the Asian market.

Ethics statement: The information supplied in this article is based upon the official specifications and our personal experience with Fujifilm cameras. We were not asked to write anything about these cameras, nor were we provided with any sort of compensation. Within the article, there are affiliate links. If you decided to buy something after clicking the link, we will receive a small commission. To know more about our ethics, you can visit our full disclosure page. Thank you!

The first difference concerns the sensor resolution. Although both house a Bayer APS-C sensor, the X-A5’s has a resolution of 24.2MP while the X-A10 / X-A20’s is just 16.3MP. The difference isn’t enormous in real-world terms but the extra resolution of the X-A5 will give you more room to crop in post production or make large prints.

Another difference concerning the sensor of the X-A5 is that it has been upgraded to include on-chip phase-detection AF pixels. This has allowed for Hybrid Autofocus (phase and contrast detection) which Fujifilm states is twice as fast as the contrast detection system of previous models.

The X-A10 / X-A20 use a slower contrast detection autofocus system with just 49 AF points. In our experience, Fujifilm’s contrast detection AF system isn’t particularly reliable for fast-moving subjects, so the X-A5 should provide an advantage in this department.

4K resolution for video is becoming the standard on most cameras, even those labelled entry-level, and the X-A5 is just the latest example.

Given the extra resolution, the results from the X-A5 should be noticeably crisper than from the X-A10 / X-A20 in both 4K and Full HD.

The X-A5 also has a brand new 4K Burst Shooting mode which lets you choose and save the best frame from 4K footage taken at 15fps. Because the frame is extracted from a video, the final image is a 8.3MP JPG file.

The X-A10 / X-A20 lack this new mode because they don’t have 4K capabilities.

Another new mode found only on the X-A5 is Multi Focus, which is another way of saying focus stacking. It automatically combines multiple 4K images to generate one 8.3MP JPG with more depth of field, which is useful for macro and landscape photography for example.

All three cameras feature WiFi connectivity which lets you remotely control the camera or view and transfer in-camera images using the free Fujifilm Camera Remote app on your smart device.

However, only the X-A5 has inherited wireless communication with Bluetooth, a feature first introduced on the X-E3.

What this means is that the camera can pair with a smart device and stay connected. Because images are automatically transferred, the connection between the camera and device is smoother than ever. You can also shoot remotely or view images stored within the camera.

Film Simulation Modes is the name Fujifilm gives its colour and monochrome picture profiles. They are widely recognised as some of the most attractive profiles you can find on any digital camera today.

Keep in mind that the extended values can only be used when the image quality is set to Fine or Normal JPG in the menu and the shutter is set to mechanical.

Another noticeable difference is the lack of a hot shoe on the X-A20, making it the only interchangeable X series camera along with the X-A10 not to have one. 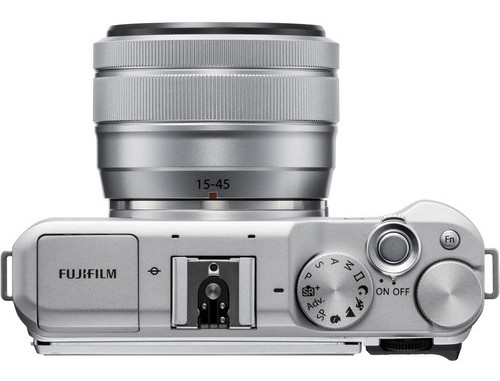 The X-A5 has a hot shoe that is TTL flash compatible.

10. Body Design and Ease of Use

Placing the X-A5 and X-A10 / X-A20 next to each other reveals some minor differences in design.

The most obvious difference concerns the colour combinations. In addition to silver and brown, there is an additional colour option for both: pink for the X-A5 and mint green for the X-A20. The X-A10, by contrast, only comes in a black/silver combination.

On the X-A10 and X-A20, the silver accents are restricted to the top and bottom plates, while on the X-A5, they surround the mount as well.

All three are styled in a retro fashion just like the other models in the X series but they have a cheaper, more “plasticky” build quality. That said, the X-A5 should be a little more robust due to the top plate being metal rather than plastic.

Finally the X-A5 makes room for a 2.5mm mic/remote jack on the side underneath the flash switch.

As mentioned at the beginning, one of the only significant differences between the X-A10 and X-A20 is that the latter has a touch sensitive screen just like the X-A5.

In shooting mode, you can take a picture, choose the AF point in still and movie modes, digitally zoom, and select film simulation modes and filters. In display mode, you can swipe, zoom, pinch in/out, double tap and drag.

The X-A10 lacks a touch sensitive screen, which may be a deal-breaker if you prefer screens to buttons and dials.

Of all the differences mentioned here, there are three in particular that favour the X-A5: the extra sensor resolution, 4K video capabilities and presence of a hot shoe. If even one of these features interests you, such as the hot shoe for flash work for example, it may well be worth paying the extra $100.

Otherwise the X-A10 (and the X-A20 if it is available where you live) are a great place to start your photography journey, particularly if you are on a tight budget and don’t really care about flash photography or video.

Check price of the Fujifilm X-A5 on