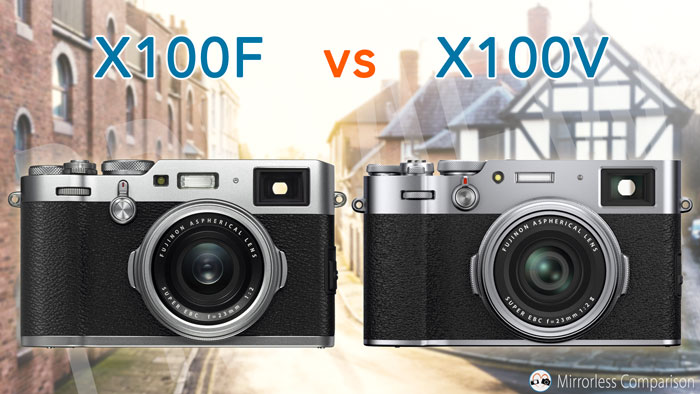 The X100 series has been a longtime favourite of mine since I first bought the X100S in 2015, and with each review and comparison we’ve performed with the successive models, my appreciation has continued to grow. I like them because they offer a nice blend of compactness, quality and intuitive controls, a distinctive mix that I’ve never found elsewhere.

The X-Pro line-up is the one that comes the closest, but somehow I never fell completely in love with the series, even though they share many of the same characteristics. The reason is simpler than you’d think: I like the concept of the X100 as a whole which includes the non-removable prime lens. I was never tempted to use the lens converters either. I find it better in its original form because you don’t have to worry about changing lenses.

The new X100V comes three years after the X100F. It brings the latest technology and a long-awaited update to the lens.

In this article, I describe the ten most important differences between the two products. But before we get started, let’s have a quick look at the similarities.

Ethics statement: The information available in this article is based on the official specifications found on the Fujifilm website and our personal experience with X100F. We were not asked to write anything about these cameras, nor were we provided any compensation of any kind. Within the article, there are affiliate links. If you decided to buy something after clicking the link, we will receive a small commission. To know more about our ethics, you can visit our full disclosure page. Thank you!

Do you want the most important differences between these two cameras in 1 minute? (Ok, 1 minute and 15s!). The video below has you covered!

The X100F features an APS-C sensor with 24.3MP. It has the third-generation proprietary X-Trans array developed by Fujifilm. This is the same sensor found inside other cameras such as the X-Pro2, X-H1 and X-T2.

The X100V has the same sensor as the X-T3 and X-Pro3, which is the fourth generation X-Trans chip with a BSI structure (back-illuminated) and 26.1 megapixels.

Just as the sensors are different, we also find a difference in the image processor: the X100F uses the X-Processor Pro engine whereas the new X100V has the faster X-Processor 4.

Although we haven’t tested these two camera side-by-side, we are well-acquainted with the two sensors and image processors thanks to our tests with the X-T2 and X-T3.

The difference in resolution should be the least of your concerns, as it is minimal. The 26MP sensor gives you a slight advantage when recovering shadows, but loses some highlight information as a result.

Note: although the sensors and image processors are the same, Fujifilm might have tweaked a few things on the new camera in comparison to the other models that share the same technology (something that brands sometimes do but don’t necessarily talk about). The side-by-side images above should only be considered a rough guide as to what you can expect.

The two cameras share most of the Film Simulation modes (Fuji’s picture profiles) but the X100V receives the new Classic Neg introduced with the X-Pro3.

The newer image processor and the latest software update give the new camera extra features and improvement, such as the HDR mode that merges multiple shots into a single shot to render more dynamic range with the help of computational photography, as well as extra image settings such as Clarity and Colour Chrome Effect.

Fujifilm hadn’t updated the lens on the X100 series since the introduction of the first model in 2011. With the X100V, we finally get a new version, although you wouldn’t know just by looking at it from the outside.

The focal length remains 23mm (35mm equivalent) and so does the maximum aperture of f/2. Fujifilm has upgraded the internal design and added a second aspherical element. The structure remains the same (8 elements in 6 groups) but Fujifilm claims better resolution, better corner sharpness and a closer focusing distance at fast apertures. Early reviews (including DPreview) confirm these claims.

The older version performed well concerning sharpness at medium and long distances, but was a bit weak at short distances unless you stopped down to f/4 or smaller (you can find out more in our our comparison with the XF 23mm f2 WR). I’m happy to hear that these faults have been rectified on the new X100V.

The minimum focus distance is 10cm on both. The new lens remains compatible with the wide and tele converters (WCL-X100 II and TCL-X100 II).

The built-in ND filter now compensates up to 4 stops (vs 3Ev on the X100F) which is another nice improvement. Sadly, it only seems to work for stills and not video.

Another limit of the old lens was the AF motor. I always found that the X100 series was lacking because of that, despite the various improvements brought to the sensors and software. Fujifilm hasn’t mentioned this aspect in the press release, and the mechanism remains external. We’ll have to wait and test it first hand to see if it has been improved.

Speaking of autofocus, the new camera sports the latest version seen on the X-T3, meaning 117 phase detection points across 99% of the sensor area (the points can be divided into 425 with certain settings). The X100F has an older system with 91 points (up to 325 in certain modes).

Included is the most recent algorithm that improves face and eye detection. Fujifilm also added the focus limiter function that allows you to set a specific distance range within which the AF can work. This can be very useful for street photographers.

The X100V introduces a tilting screen for the first time to the series. It is not the original design seen on the X-Pro3, but rather a classic two-way tilting mechanism.

Furthermore, the series also gets touch capabilities for the first time. On the X100V, you can move the focus point, take a shot, activate up to four functions, prioritise a face for the AF, navigate the Quick menu and more.

The X100 series has a unique hybrid viewfinder, a technology it shares with the X-Pro series. Thanks to the front lever, you can switch between an optical viewfinder and an electronic viewfinder.

Both OVFs allow you to display bright frames that show the parallax difference in real time, as well as activate a small ERF (electronic range finder), a tiny screen that appears at the bottom right of the OVF which you can use to check focus for example.

The X100 series doesn’t strike you as an action camera at first, but the capabilities aren’t that bad. The X100F can shoot at a maximum of 8fps with AE/AF tracking and good buffer capabilities (when shooting JPGs).

The X100V takes a big leap forward with a maximum of 11fps when using the mechanical shutter, or 20fps with the electronic shutter (30fps if you use the 1.25x crop mode). This is not surprising because of the new processor and faster sensor readout.

Like these X-T3 and X-Pro3, the burst with the electronic shutter works with live view and no blackouts when using the EVF or LCD screen, which gives you a smooth uninterrupted feed of what’s going on in your scene. It’s a nice feature to have and so far, the only other brand to employ the same technology is Sony with its A9 series.

1080p recording can go as fast as 120fps with the High Speed Mode, another feature missing from the previous camera.

The X100V includes more settings that are designed for video such as the Eterna profile and F-Log. Internal recording is 8-bit but 10-bit is available via the HDMI output.

An important thing to mention is there is no stabilisation of any kind. The lens is not stabilised and unfortunately Fujifilm didn’t add the Digital Gimbal mode introduced with the X-T200.

The overall design of the X100V is pretty much identical to its predecessor. The new model is slightly larger, deeper and heavier, but none of these specifications suggest anything drastic.

The buttons and dial on top are similar, including the twin shutter speed / ISO solution first introduced with the X-Pro2. We can notice a slightly re-designed grip on the new model as well. On the front, the EVF/OVF lever can also work as a custom button if you hold it down.

One interesting difference on the new camera is that you can now lift the ISO dial without needing to hold it up to change the value, which should prove more comfortable than the X100F solution.

On the rear, the four-way D-pad is gone, replaced by a joystick that can be used to navigate the menu as well as move the focus point. This change has been seen on many new Fujifilm cameras, so it’s no surprise to see it here as well. (However not everybody likes this new approach.)

The rear command dial is a bit thicker and has a different texture which should improve the ease of use (and the same goes for the front dial). The Q button has been moved to the extreme right side, probably to stop users from pressing it inadvertently when using the camera. We can also notice that all the icons are gone on the X100V, replaced by the word indicating the function of each button.

The menu interface remains similar, but the X100V gets some extra options such as for example the possibility to reduce the number of settings available in the Q menu.

The X100V features a new top cover made of aluminium with sharper edges in comparison to the previous model. It also offers weather sealing, a first for the X100 series, although there is a catch: in order to protect the camera from dust and moisture, you need to attach the optional PRF-49 protective filter with the AR-X100 adapter ring (or one of the lens converters). This means that the body is protected but the lens is not without these additional elements.

Note that these figures don’t reflect real life use. You can usually take more than what these numbers suggest with either camera.

Both cameras can be charged via USB, and the X100V uses the Type C port, which also doubles up as a headphone output (with an adapter).

Bluetooth (version 4.2 on the camera) allows the X100V to be paired with a mobile device (smartphone or tablet) and synchronises time and date. You can also remotely control the camera (remote shutter mode) with the dedicated app.

There is nothing surprising about the various upgrades given to the new X100V, especially when it comes to the sensor and performance. They were all inherited from the X-T3 and X-Pro3, just as its predecessor the X100F shared many characteristics with the X-T2 and X-Pro2.

I’m glad to see a tilting / touch screen finally make its debut. I always find them useful and this can only improve the already excellent ergonomics and ease of use of these cameras.

Fujifilm has also decided to push the video capabilities a bit more, something that the brand didn’t do with the X100F. Granted, most of you probably won’t buy these cameras because of the video features, but it’s nice that the specifications are there anyway.

The improvements to the lens and the addition of weather-sealing means that there is not a lot left to criticise. The fifth iteration looks like the best yet. I can’t wait to try it out.

Check price of the Fujifilm X100F on
B&H Photo