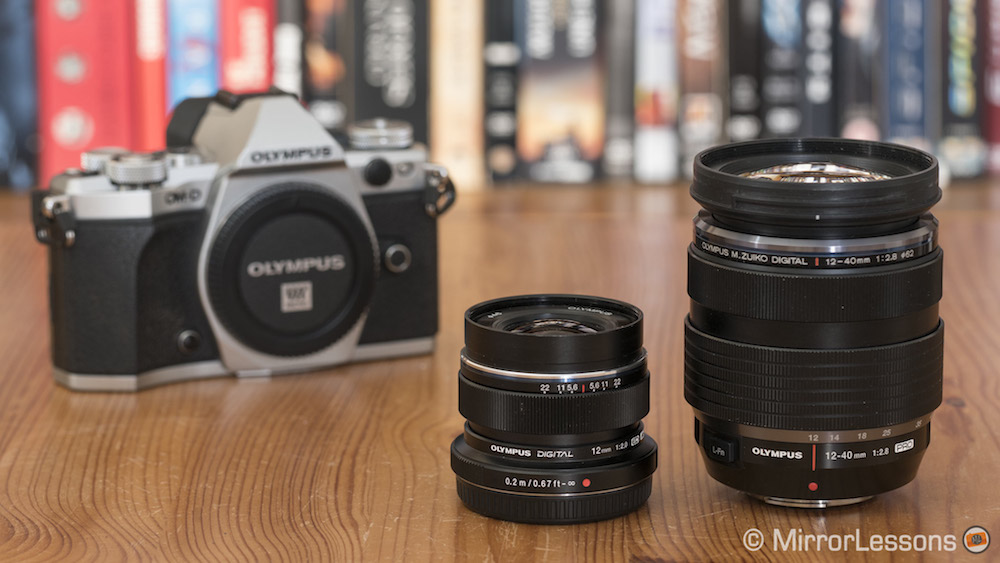 When we compare lenses, the general rule is that we pitch primes against primes and zooms against zooms. But the fun thing about rules is that every now and then you can break them!

In this article, we’re doing just that by comparing the M.Zuiko 12mm f/2 prime to the M.Zuiko 12-40mm f/2.8 constant aperture zoom at its widest angle. Both offer a 24mm field of view (35mm format equivalent) but where the 12mm is fixed at one focal length and is very compact, the 12-40mm is larger and offers more versatility due to its focal range.

Ethics statement:  We were provided with a sample of the 12mm for a three-week loan period and used to own the lens back in 2013. The 12-40mm has been part of our personal collection for three years. We were not asked to write anything about these cameras, nor were we provided with any sort of compensation. Within the article, there are affiliate links. If you buy something after clicking the link, we will receive a small commission. To know more about our ethics, you can visit our full disclosure page. Thank you!

The 12mm f/2 is one of Olympus’ most compact and lightweight primes, weighing in at only 130g. The build quality is excellent thanks to its metal finish but it lacks weather sealing.

The 12-40mm f/2.8 is far from being the largest lens for the system but at 382g, it is certainly much bigger and heavier than the 12mm. When set to 12mm, it is approximately twice the height of the 12mm, but zooming out will obviously increase the length even more. It has a full metal build and is completely dust, moisture and freeze proof down to -10oC. 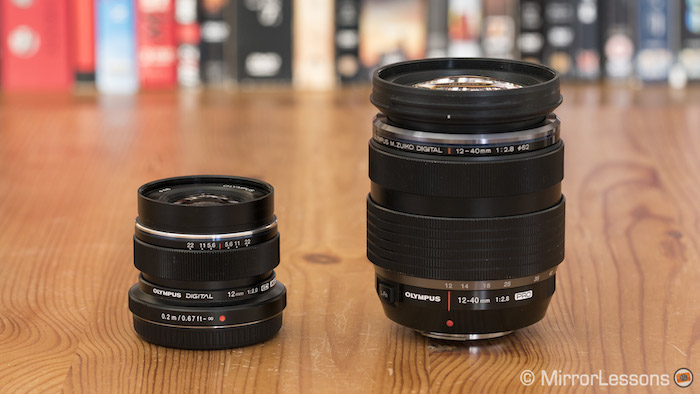 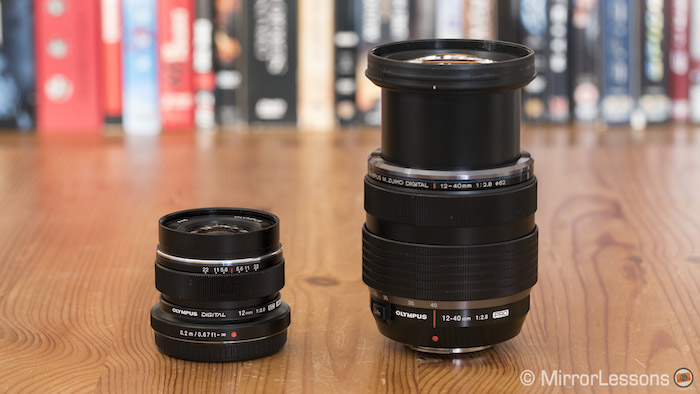 Because the 12mm is so small, it is a good fit for all Micro Four Thirds cameras regardless of their size. The 12-40mm on the other hand is a better match for professional bodies such as the Olympus OM-D E-M1 II or Lumix GH5 but it can also work on slightly smaller bodies with a good grip like the OM-D E-M5 II (pictured below) or E-M10 III. 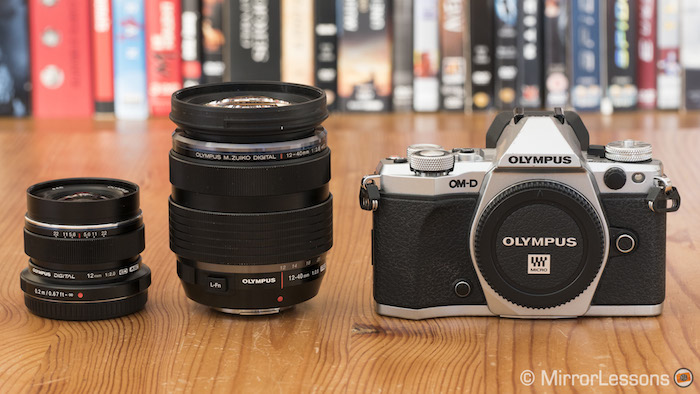 Usefully, both lenses sport Olympus’ “Snapshot” focus mechanism, which lets you switch between auto and manual focus by sliding the focus ring back and forth. Pulling the ring back into manual focus reveals a hyperfocal scale which can help you focus with precision when using either lens for astrophotography or street for example. 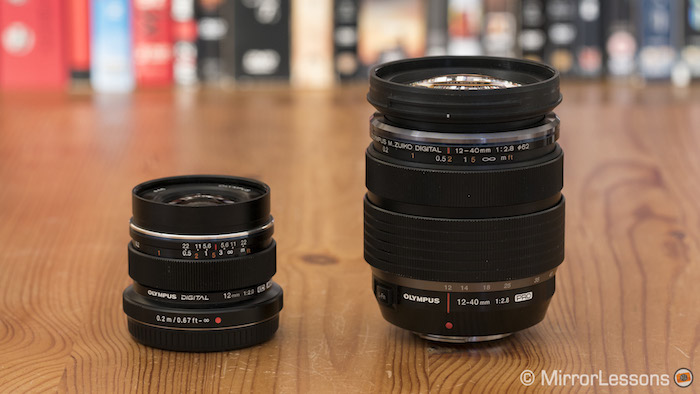 Both lenses feature Olympus’ ZERO coating which does a good job of suppressing ghosting and flare as we will see in the dedicated section below. 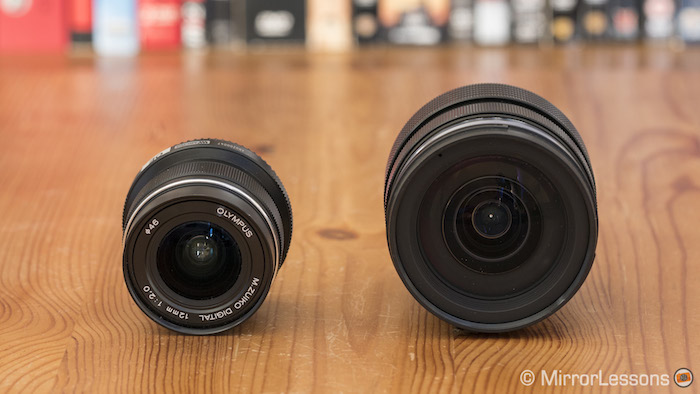 One feature the zoom has that the prime doesn’t is a function button (L-Fn) on the barrel to which you can assign various settings.

A lens hood that reverses over the barrel is available for both lenses, though the 12mm’s must be purchased separately. Whereas that of the 12-40mm is petal shaped and clicks into place via two buttons on either side, the 12mm’s has a rectangular shape and must be screwed into place. Another difference is that the former is plastic while the latter is metallic. Personally speaking, I’m not a fan of the 12mm’s hood because the screw doesn’t really stop the hood from moving. What’s more, it can easily pop off when you go to mount or unmount the lens.

My bet is that one of the main reasons you are visiting this comparison is to find out if there are any significant differences in sharpness, so let’s cut directly to the chase by looking at a series of comparative images taken at a long focus distance!

At the centre, the performance is very similar through the aperture range but the 12-40mm does retain a very small advantage from their fastest apertures up to f/5.6. In the case of both lenses, sharpness is at its peak between f/2.8 and f/5.6 and all values in this range look extremely similar.

Diffraction starts to show at around f/8 but images only become visibly soft at f/16 and f/22.

At a close focus distance, f/2 on the 12mm is very similar to f/2.8 on both lenses, and all aperture values between f/2.8 and f/5.6 look almost identical.

In the corners, I was surprised to find that the 12-40mm is actually sharper than the 12mm from their respective fastest apertures up to around f/8. From f/11 onward, they look very similar.

The primary purpose of wide angle lenses isn’t to yield a beautiful bokeh, so we must be realistic in our expectations about the capabilities of these two lenses. When shooting with either the 12mm prime or the 12-40mm set to 12mm, you can get decent results at their respective maximum apertures as long as you focus close to your subject. Below you can see some examples that demonstrate the subject separation and bokeh capabilities of the two lenses.

Both lenses have a minimum focus distance of 20cm. For the 12mm, this corresponds to 0.08x magnification (0.16x full frame equivalent). The official specifications for the 12-40mm state a maximum magnification of 0.3x (0.6x equivalent) but this is because the zoom is able to maintain the same minimum focus distance up to 40mm. Although we don’t know the magnification at 12mm, you can see from the examples below that it is higher than the prime lens. In fact, the PRO zoom is a great semi-macro solution that I often use in the place of my M.Zuiko 60mm f/2.8 when I don’t need 1:1 magnification.

When looking at both my test shots and the various sample images I took out in the field, I had difficulty coming across any relevant examples of chromatic aberration, which would suggest that it is very well controlled on both the 12mm and 12-40mm.

All Micro Four Thirds lenses from Olympus and Panasonic have a unique lens profile to correct distortion either in-camera (JPGs) or via a RAW converter such as Adobe Lightroom. For this reason, you won’t notice very much barrel distortion from either lens in field conditions.

Vignetting isn’t entirely corrected but it doesn’t pose a problem on either lens. In fact, it is only really noticeable at f/2 on the 12mm.

Both lenses are resistant to flare thanks to Olympus’ ZERO coating but in our experience, the 12-40mm is somewhat more vulnerable than the 12mm. On the 12mm, ghosting flare mostly takes the form of blue and green orbs whereas on the 12-40mm, you might come across larger multi-coloured orbs. As we mentioned in the design section, a lens hood is available for both lenses and having one can reduce the severity of flare in your images.

We’ve used both lenses on numerous Micro Four Thirds cameras and we’ve found their autofocus motors to be fast and virtually silent, particularly in S-AF mode. However the performance is a little less reliable on Panasonic cameras whose Depth from Defocus AF system is only compatible with select Lumix lenses. The lenses still work well in good light conditions but they can behave in more erratic manner in low light or with fast moving subjects.

In the case of both lenses, the fly-by-wire focus ring only moves between the focusing limits when pulled back into MF mode, which is the equivalent of approximately a quarter of a turn. This means that the speed at which you turn the ring doesn’t affect how quickly you travel from infinity to the minimum focus distance.

If you switch the camera into MF mode directly in the menu without sliding the ring back, it acts like normal fly by wire focus ring and the speed at which you turn it affects the transition speed.

Both operate with precision especially when combined with the manual assists (magnification, focus peaking) of Micro Four Thirds cameras.

If you are reading this comparison, you already know the obvious: the 12mm’s advantage is its compact size and slightly faster maximum aperture, whereas the 12-40mm is beneficial as an all-in-one weatherproof solution that you can affix to your camera for 90% of your photography.

What we really want to know is: does the 12mm prime lens bring a tangible advantage in terms of overall optical quality in comparison to the 12-40mm set to the same focal length?

Contrary to our expectations, we found that the 12-40mm is actually slightly sharper in the corners between f/2.8 and f/8, thus dispelling the notion that primes are always sharper than zooms. The zoom lens also has superior magnification capabilities which can be useful if you enjoy close-up work with wide angles.

The main advantage the 12mm has over the 12-40mm is its slightly better resistance to flare when shooting into direct sunlight. Everything else, from centre sharpness and the character of the bokeh rendering to the AF and MF performance and even the price, is more or less on par.

So, where does this leave us?

All these factors considered, my advice would be: go for the 12-40mm instead of the 12mm unless you a) want to avoid large lenses at all costs or b) own a small Micro Four Thirds body. Not only is the optical performance marginally better overall but the fact that it is a constant aperture zoom means you can leave it on your camera body and use it for multiple genres, just as we have during the past four years of owning the lens.

Check price of the Olympus M.Zuiko 12mm f/2 on