Olympus has been developing its PRO series of lenses since late 2013, the year in which the original OM-D E-M1 was released. The first lens in the series was the M.Zuiko 12-40mm f/2.8 PRO which rapidly became a favourite amongst many advanced amateurs and professionals, ourselves included. It was later joined by five more lenses, the latest of which is the M.Zuiko 12-100mm f/4 PRO, whose announcement coincided with the release of the E-M1 II.

Both lenses can suit a variety of genres, but while the 12-40mm has the advantage of a faster constant f/2.8 aperture, the 12-100mm benefits from more reach on the telephoto end.

In this comparison, we’ll be looking at all the similarities and differences between the 12-40mm and 12-100mm – both the obvious and the more subtle. Let’s get started!

Ethics statement: We purchased the M.Zuiko 12-40mm f/2.8 PRO for our own personal use, while the M.Zuiko 12-100mm f/4 PRO was loaned to us for review. We were not asked to write anything about these lenses, nor were we provided any other compensation of any kind. Within the article, there are affiliate links. If you buy something after clicking the link, we will receive a small commission. To know more about our ethics, you can visit our full disclosure page. Thank you! 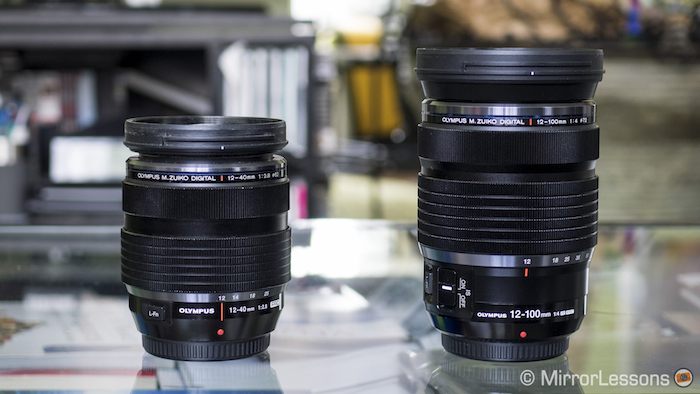 Were these two lenses siblings, you’d immediately identify the 12-100mm as the taller and beefier of the two. This can be attributed to its wider focal range. 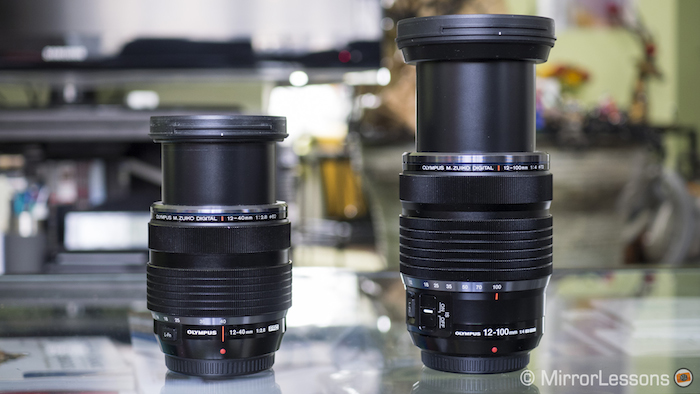 However, most of their other characteristics are identical, from the L-function button on the barrel to the clip-on petal-shaped lens hood. The only real physical difference that stands out is the additional Image Stabilisation switch on the 12-100mm. 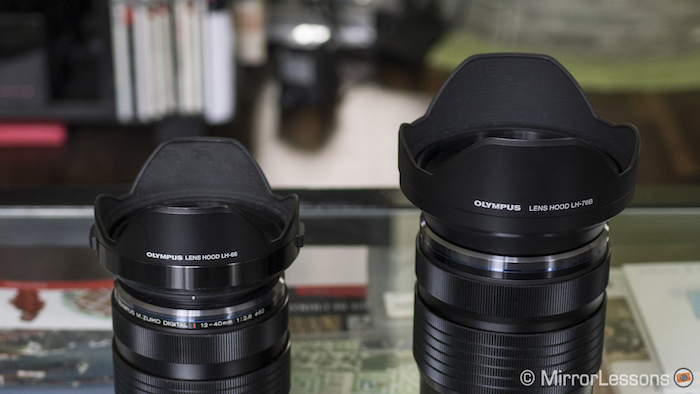 Although both have a constant aperture, the 12-40mm’s is one stop faster – f/2.8 versus f/4 to be precise – making it more convenient to use in poor light conditions.

Both lenses are completely dust, splash and freeze proof and feature a black metal finish that exudes quality and robustness. I can personally testify to the 12-40mm’s build quality because I once fell down a small flight of stairs while using it on the E-M1, and it continues to work as well as the day we bought it.

The ribbed focus and zoom rings occupy most of the barrels of the two lenses. The focus ring is a fly-by-wire type that can be pulled back to enter manual focus mode. Doing so reveals a distance scale which can be helpful for street or astrophotography. We find the manual focus operation, overall, very easy and precise on both lenses but we rarely use it because the autofocus performance is so good.

The filter thread of the 12-100mm is a little bigger than that of the 12-40mm, and with a minimum focus distance of 15cm at the widest angle, it is capable of focusing 5cm closer than the 12-40mm.

First let’s take a look at how sharpness compares at a distance.

With the lens set close to infinity, we found that there was no relevant difference in centre sharpness between the two lenses at 12mm, 25mm and 40mm, which makes sense given that both are PRO lenses from the same manufacturer. At all focal lengths, peak performance occurs between f/4 and f/5.6 and both are very sharp at these apertures. Happily, the performance at f/2.8 on the 12-40mm is very close to f/4.

At 100mm, the 12-100mm continues to perform admirably through the aperture range, with peak sharpness occurring between f/4 and f/5.6. As you can see in the crops below, it is capable of extracting even the finest detail from the fence and tree branches.

Diffraction begins to appear at f/8 but the performance is still very good. It only becomes more invasive by f/11 and f/16, and the results become unusable by f/22.

The corner of the frame tells a somewhat different story. At 12mm, the 12-40mm appears a little sharper at all apertures, with the difference being most evident at f/4.

Once we reach 40mm, the results become very similar on both lenses. The difference between f/2.8 and f/4 on the 12-40mm becomes even more pronounced at this focal length.

So, what about sharpness at a close focus distance? To see if there were any differences, I repeated the same test and found almost identical results: the two lenses perform in a very similar manner at all focal lengths and apertures at the centre and are at their best between f/4 and f/5.6, though f/2.8 on the 12-40mm usually isn’t far behind.

Another important characteristic to consider is the out-of-focus rendering of the two lenses, since both can work as makeshift portrait lenses thanks to their reach on the telephoto end, or even semi-macro lenses due to their close-focusing capabilities.

When set to 40mm (the longest focal length they share) and f/4 (the fastest aperture they share), it becomes clear that the out-of-focus rendering is nearly identical. The specular highlights are round across the frame except for in the extreme corners, and feature the same mottled appearance at the centre and heavy border around the circumference. The transition between elements is smooth, though you’ll get slightly creamier results and larger bokeh balls by opening the aperture to f/2.8 on the 12-40mm.

A shallower depth of field is definitely easier to achieve with the 12-100mm for the simple reason that it extends further on the telephoto end. Though the bokeh balls are larger, they retain a similar appearance.

The 12-100mm can focus as close as 15cm when set to 12mm, which is 5cm closer than the 12-40mm at the same focal length. Between the two, I prefer using the 12-40mm for close-up work at this focal length because the 12-100mm requires you to get extremely close to your subject – so close that the subject almost touches the front element. This can be inconvenient because the closer you are to the subject, the more likely it is you’ll cast a shadow on it. The examples featuring a cat ornament below exemplify this very well.

The more you zoom in with the 12-100mm, the further you must position yourself from the subject. By the time you reach 100mm, the minimum focus distance becomes 45cm while on the 12-40mm, it remains 20cm through the zoom range.

Also interesting to note is that the two lenses don’t produce the same composition at close focus distances. Below are two examples taken at 12mm.

Both lenses suffer from flare but the petal-shaped lens hood included in the kit does a very good job of mitigating the worst of it. Flare primarily appears in two forms: polygonal shapes and the infamous “purple blob” that often appears when you use Micro Four Thirds gear. It is quite similar on both lenses.

Distortion isn’t really an issue on either lens, though barrel distortion is more prevalent at 12mm on the 12-100mm than the 12-40mm.

As for chromatic aberration, I didn’t come across any relevant examples during my testing period, which would suggest that it is very well-controlled on both lenses.

The 12-100mm is the second lens to feature optical stabilisation and we can confirm that it works wonders when combined with the updated 5-axis stabilisation system of the E-M1 II. At 5 seconds, our hit rate was close to 100% while between 8-10 seconds, we could usually take an in-focus shot 50% of the time.

A few times, we even managed a decent result at 15 seconds, though nothing can beat the 20 second hand-held exposure Mathieu achieved whilst testing the E-M1 II in Spain a few months ago!

When used on a non-stabilised body such as the 4-year-old Panasonic Lumix GF5, for example, the optical stabilisation continues to impress. With a few attempts, we managed to take an near-perfect shot at 4 seconds at the widest angle.

If you are interested in the lens’ IS capabilities for video, you’ll be happy to know that it performs really well. Of course, you won’t get the same amount of compensation as with sensor stabilisation but fixed shots are pretty stable and there isn’t any visible jittering.

The 12-40mm was one of the first PRO lenses, and as such, relies on the in-body stabilisation of Micro Four Thirds cameras. Our hope is that Olympus will eventually release a mark II version of this lens that features optical stabilisation.

Similar to the other PRO lenses, the autofocus mechanism of both the 12-40mm and 12-100mm is fast and accurate in single and continuous autofocus, especially on the latest Micro Four Thirds cameras. It slows down a little in poor light or in situations with low contrast but this is only to be expected.

The autofocus motor itself is deadly silent, which makes the two lenses good companions for video work as well.

Below you can find some examples with both lenses taken in challenging autofocus situations.

One is its flexible focal range which boasts an extra 60mm beyond that of the 12-40mm. This makes it a better “all-purpose” solution, especially in situations where constantly changing lenses isn’t viable. A good example is travel photography due to the wide variety of subjects you might find yourself photographing in a relatively short period of time. What’s more, having just one lens that covers all your favourite focal lengths instead of 3 or 4 means you can keep your handheld luggage to a minimum, which is no small advantage for those always on the go.

However, there is much to be said for the constant 2.8 aperture of the 12-40mm, as it helps you to keep your ISO values down in poor light conditions and achieve a little more shallow depth of field. It is also smaller and lighter, so if you don’t often work at the telephoto end, you may find it more convenient to use for your daily work. And, of course, there is always the option of buying a second constant aperture zoom such as the Lumix 35-100mm f/2.8 to accompany the 12-40mm should you ever need a longer focal length.