One of the most recent additions to Sony’s full-frame range of optics is the FE 50mm f/1.8. It becomes the fifth full-frame lens with a standard field of view, and priced at just shy of $200, it is currently the company’s most affordable offering by a mile.

In this comparison, we’re going to be investigating how this “cheap and cheerful” option stacks up against the very first standard lens ever released for the system, the Sonnar T* FE 55mm f/1.8 ZA. The latter has been a mainstay in our collection for nearly three years now, so we were eager to see whether the 50mm – which is around 1/5th of the price – can keep up with its premium sibling.

Ethics statement: We bought the Sony FE 50mm f/1.8 and FE 55mm f/1.8 for our own personal use. We were not asked to write anything about these products, nor were we provided with any sort of compensation. Within the article, there are affiliate links. If you buy something after clicking the link, we will receive a small commission. To know more about our ethics, you can visit our full disclosure page. Thank you! 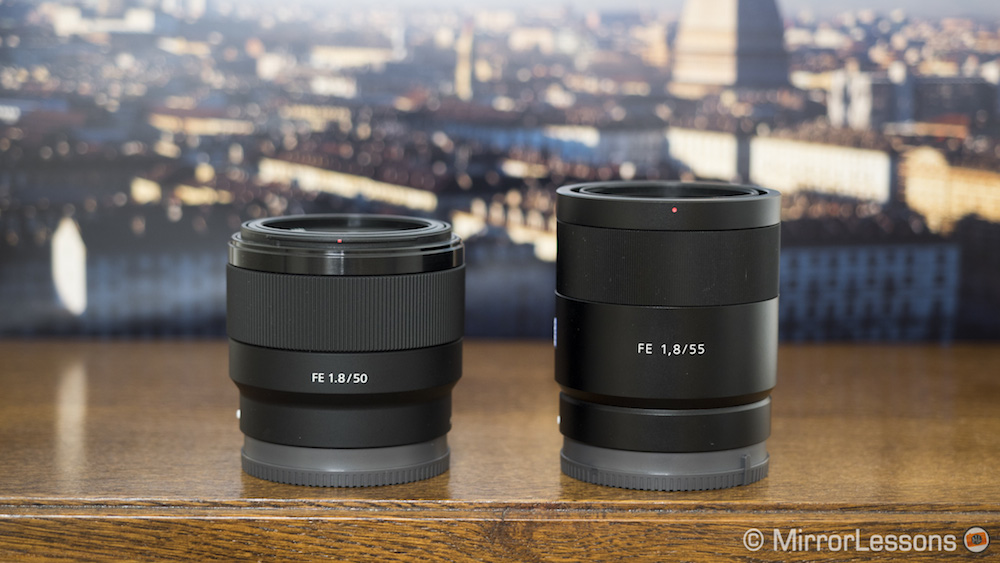 I can’t think of a better starting point than design and build quality, as this where a number of the main differences can be found.

The 50mm features a plastic barrel construction that, while fairly solid, lacks weather-sealing, whereas the 55mm is mostly made of metal and enjoys dust and moisture resistance. The more robust construction is the reason the 55mm is around 100g heavier than the 50mm, despite being more or less the same size. However, you won’t really feel a tangible difference between the two lenses once they are mounted on your camera. 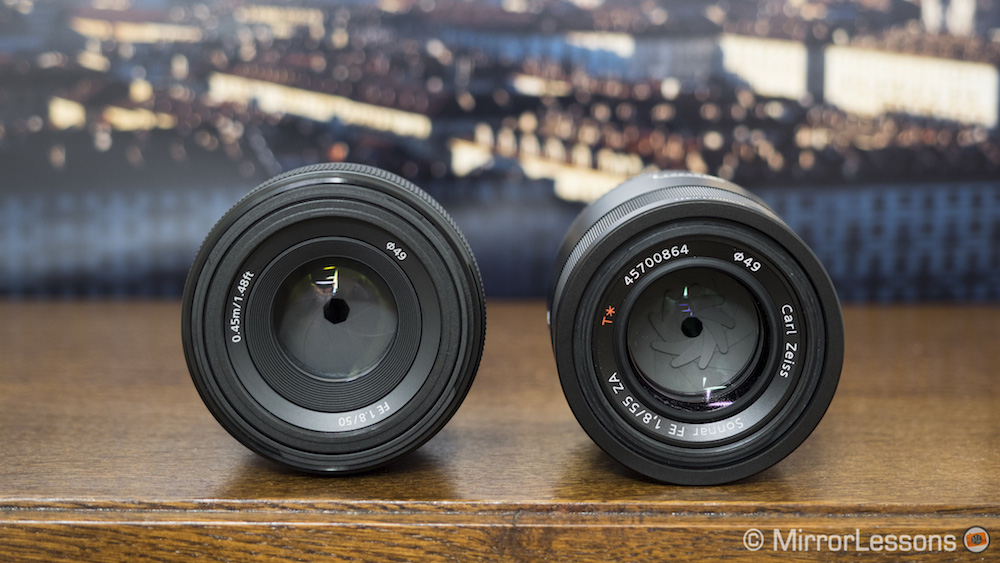 Both have a minimalistic design that is devoid of external features except for a ribbed fly-by-wire focus ring. While both work well, that of the 55mm feels somewhat smoother and more precise.

Because the 50mm employs a DC motor, the optical unit moves back and forth while focusing. You can see this in action by watching the front element move forward as you travel from infinity to the minimum focus distance. It is also quite audible. The 55mm, by contrast, utilises a linear motor driven internal focusing mechanism that does not move or make any noise.

Both come with a lens hood: the 50mm’s is round and made of plastic, while the 55mm’s is petal-shaped and made of a mix of high quality plastic and metal. 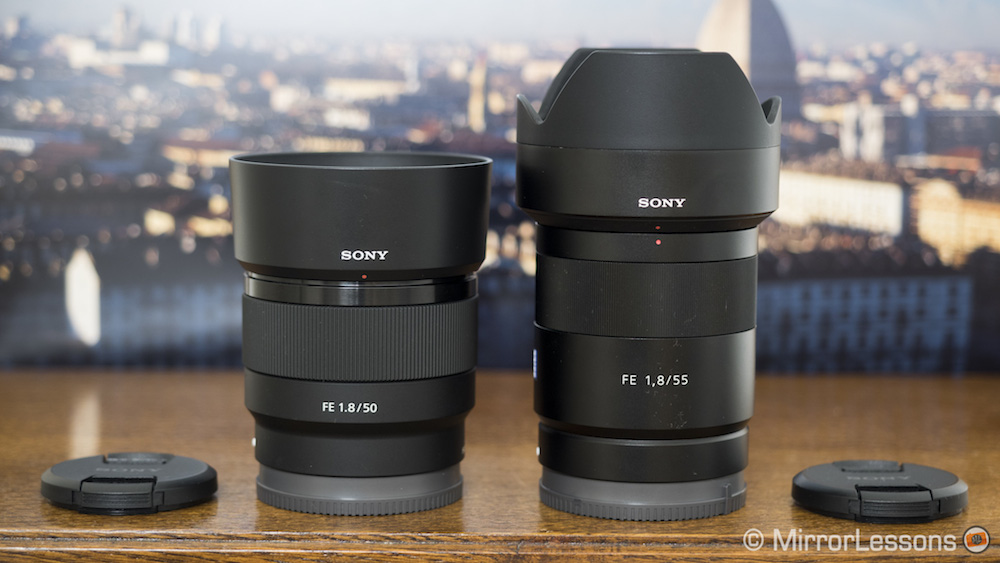 They share the same-sized filter thread (49mm) which means that their clip-on lens caps are interchangeable.

The first set of images were taken at a close working distance, with the point of focus being the eye of the doll at the centre of the frame.

As we can see from the following 100% crops, the two lenses perform in a very similar manner at all aperture values. Peak performance is found between f/4 and f/8, with f/5.6 being the sharpest value overall, and diffraction only starts to become evident beyond f/11. Although f/1.8 and f/2 are noticeably softer than the other values, they remain perfectly useable.

At a distance close to infinity, the results are once again very close at all values.

The biggest difference in performance can be seen in the corners at the fastest apertures (f/1.8, f/2.8 and f/4). Whereas the 55mm’s corner sharpness at all three values is only slightly worse than at the smaller apertures, the 50mm is clearly softer at f/1.8 and f/2.8 and marginally softer at f/4.

The best results on both lenses can be found at the smaller apertures (between f/5.6 and f/11). At these values, the performance of the 50mm is extremely close to that of the 55mm.

To summarise, the 55mm is indeed the optically superior lens, albeit to a lesser extent than expected. Centre sharpness is almost identical while corner sharpness is similar at all but the fastest apertures.

Both the 50mm and 55mm feature a relatively fast maximum aperture of f/1.8 which allows you isolate your subject while rendering the background (or foreground) blurry. Combined with the 50mm/55mm field of view (or 75/82.5mm on APS-C cameras), you have an interesting set-up for portrait work as you can see from the examples below.

You can achieve an attractive background blur (or “bokeh”) with either lens by using the fastest apertures, and to be honest, there isn’t a big difference in how they render the out-of-focus areas. The specular highlights (or “bokeh balls”) take on a cat’s eye shape at the fastest apertures, especially close to the edges of the frame, and display some mild fringing around the edges. The more you stop down, the more they begin to assume the shape of the rounded diaphragm (7 blades on the 50mm and 9 blades on the 55mm).

Comparing the images below, I would say that the 55mm’s bokeh appears a little less busy around the highlights but the overall look is very similar.

Flare is generally very well-controlled on the 50mm but this doesn’t mean you won’t come across some examples when shooting in the direction of strong light sources such as the setting sun. For example, I came across this curious rainbow flare a couple of times but you can easily get rid of it by adjusting your composition by a few millimetres.

With the 55mm, we don’t have any relevant examples of flare to show, which is testament to how well the Zeiss T* coating keeps flare at bay.

Longitudinal chromatic aberration is visible in images taken with both lenses at the fastest apertures (f/1.8 and f/2) even if you apply the dedicated lens profile or turn on the JPG corrections in-camera. By f/2.8, it improves to the point that you barely notice it. Thankfully it is quite easy to remove in post production with the dedicated tool.

Distortion simply isn’t an issue with either lens whereas vignetting is very mild, only appearing at the fastest apertures. Keep in mind that the dedicated lens profile, which is automatically applied when you import your files into Lightroom, all but eliminates these issues.

The 50mm has a slightly closer minimum focus distance than the 55mm (50mm vs. 45mm) but you won’t notice any difference in practice because the extra 5mm reach of the 55mm compensates for the fact that you can’t move as close to your subject. The result is an identical magnification of 0.14x.

Neither is particularly useful for macro work unless you invest in a separate adapter such as the Raynox 250 macro. Below you can see an example I took with the Raynox on the 55mm two summers ago.

While both lenses are considered “standard” in that they have a field of view close to that of the human eye, the 50mm f/1.8 is what photographers would consider a classic “nifty fifty” lens. The 55mm is 5mm longer than the 50mm but this extra reach doesn’t make that much of a difference in the real world on either full-frame or APS-C bodies as you can see below.

Another thing to note is that both lenses experience focus breathing, which is to be expected from photography lenses. If you perform slow focus pulls during video recording, it isn’t too bothersome but it is very noticeable if you rapidly travel all the way from infinity to the minimum focus distance.

Comparing the two lenses side-by-side with the same settings on the A7r II, we found that there was no difference in colour rendering.

One aspect about the 50mm that disappointed me more than any other was its autofocus performance. It delivers good results when shooting static subjects but can easily mis-focus or hunt back and forth with moving subjects or subjects that lack contrast, even if you use a Sony camera with PDAF. The autofocus mechanism is also quite noisy, producing a whirring sound that is audible in video footage.

The poor performance of the 50mm is likely due to the fact that the optical unit has to move back and forth to acquire focus.

The 55mm, by contrast, is quick, silent and very precise in all situations thanks to its high speed internal focusing mechanism. It is also deadly silent for video work.

Manual focusing is possible with both lenses thanks to the presence of a large fly-by-wire focus ring. Both feature a ridged design that helps you to grip and turn the rings.

Because the 50mm’s is made of hard plastic rather than metal, I find it more comfortable to use in cold temperatures. However, the 55mm’s ring is definitely smoother and more responsive, making it easier to make very fine adjustments to focus.

When turning the focus rings, you’ll notice that the 55mm is also much quieter than the 50mm. This is once again due to the optics moving back and forth within the barrel of the 50mm.

In the case of both lenses, the time it takes to go from infinity to the minimum focus distance depends on how quickly or slowly you turn to the ring.

The question this particular comparison raises isn’t so much which lens is better as how much better the 55mm is than the 50mm given that the latter costs so much less than the former.

The build quality of the 55mm is certainly superior, from the inclusion of dust and moisture resistance to the solid metal construction, as is the tactile feel of the focus ring. It is also more resistant to flare and ghosting and has a much quieter, faster and more accurate autofocus mechanism.

In terms of pure optical quality, however, I have to say that I was pleasantly surprised by the performance of the 50mm in comparison to its premium sibling. Sharpness is very similar at the centre at both close and long focus distances, and the corners are only softer at the fastest apertures, which matters less for portrait work since the corners are usually out of focus anyway. The quality of the bokeh is very similar and issues such as chromatic aberration and vignetting, which appear in images taken with both lenses, can be fixed quite easily in post production.

For these reasons, I would say that unless you plan to shoot moving subjects on a regular basis or tend to work in challenging weather conditions, the FE 50mm is a more than adequate alternative to the 55mm for most genres including portraits, street, and landscapes.