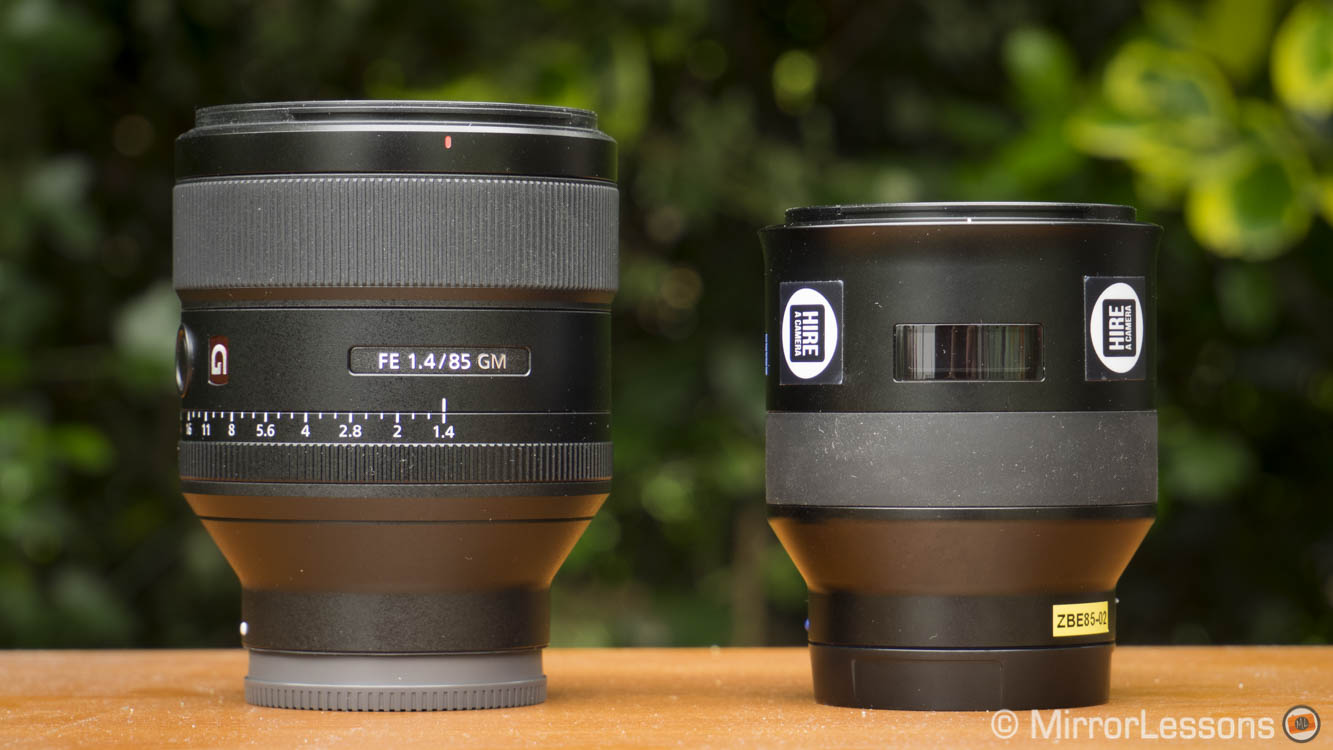 The interesting thing about the Sony FE system is that you can adapt many third party lenses and you can find a very good selection for portraits. However it is also important to have a choice from the native E-mount catalogue. Between 2015 and this year, the system went from zero to two excellent portrait lenses: the Sony G Master and the Zeiss Batis.

The Sony 85mm f/1.4 was announced in February alongside the FE 24-70mm f/2.8 and the FE 70-200mm f/2.8. These three products are part of a new family of professional lenses called G Master. Sony has been insisting a lot on their superior resolution and bokeh aided by a new Extreme Aspherical element.

The Zeiss 85mm is part of the Batis family, which is one of two series designed exclusively for the FE system by the iconic German brand (the other one being the Loxia series). It was also the first native portrait lens released for the system.

As usual, the announcement of a new lens that fits into the same category as another leads us to ask the inevitable question: which one is better?

We had the chance to use the two lenses side-by-side and here is what we found.

Ethics statement: This article was originally published on the MirrorLessons website. After starting this comparison website, we migrated a few articles over here. The 85mm f/1.4 G Master was loaned to us for review by Sony while the Zeiss Batis lens was loaned at Hireacamera. We were not asked to write anything about these lenses, nor were we provided any other compensation of any kind. Within the article, there are affiliate links. If you buy something after clicking the link, we will receive a small commission. To know more about our ethics, you can visit our full disclosure page. Thank you!

One of the first things you notice right away is the size of the Sony lens compared to the Batis. It doesn’t unbalanced the camera as much as the 24-70mm GM but when you hold the Batis lens, the difference in weight is quite surprising (the Zeiss lens weighs half).

Both lenses have a robust design, although I have to say that the Sony lens feels like a tank. It is dust and moisture resistant but not completely weather-sealed unlike the Batis lens.

Concerning the ease of use, the Sony GM lens has a few advantages.

There are two aspects I love, the first being the aperture ring: it’s smooth, precise and really nice to use. It moves in 1/3 steps and can also be de-clicked for video use. I wish that more lenses could have a ring like this and it is something I would have expected from Zeiss as well.

Then we have the focus ring. Both lenses have a “focus by wire” focus ring covered with rubber. The one of the Sony G Master lens is more precise to use especially when changing the focus point in video mode. It is easier to make fine adjustments, and smooth and slow transitions. 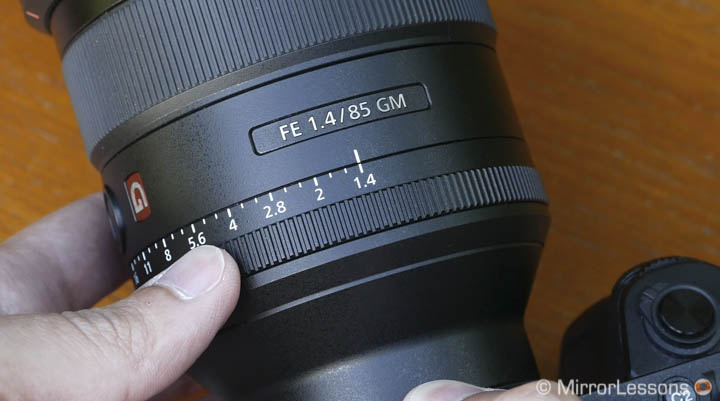 With the Batis lens I have to turn the focus ring more to achieve the same result and the tactile experience is not as precise as with the Sony lens. The Zeiss 85 has more breathing in comparison to the Sony lens when changing the focus point.

Finally you will find an AF/MF switch and focus hold button on the Sony lens. The latter in particular can be quite useful.

The Batis 85mm lacks buttons, switches and an aperture ring but like its siblings comes with a small OLED screen on top. You can use it to check your focus distance and depth of field. The data can be difficult to see in daylight but it is definitely useful in low light. However I find the OLED screen more useful with wide angle lenses such as the 18mm or the 25mm (astrophotography for example). 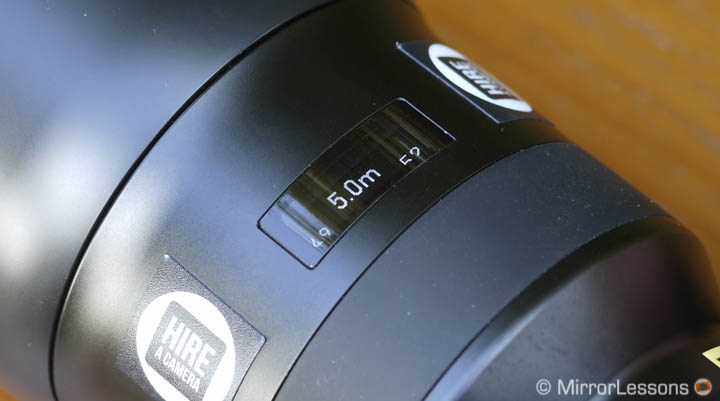 The first difference between these two lenses concerns the fastest aperture: 1.4 on the Sony lens and 1.8 on the Batis 85mm. Let’s see first how the two lenses perform wide open.

The Zeiss Batis lens is sharper at f/1.8 and also has more contrast.

I performed this test many times to double check my findings but I got the same result every time. With both lenses stopped down to f/2, the results are much more similar but we can still notice a little bit more contrast in the Zeiss version. From f/2.8 the results are basically identical.

At f/4 the Sony lens seems to appear slightly sharper although it is really difficult to detect any relevant differences. This can be applied to the other apertures as well.

When we talk about portrait lenses we inevitably think about bokeh. On a technical note, the Sony lens has an 11 blades iris mechanism versus the 9 blades of the Batis 85mm. 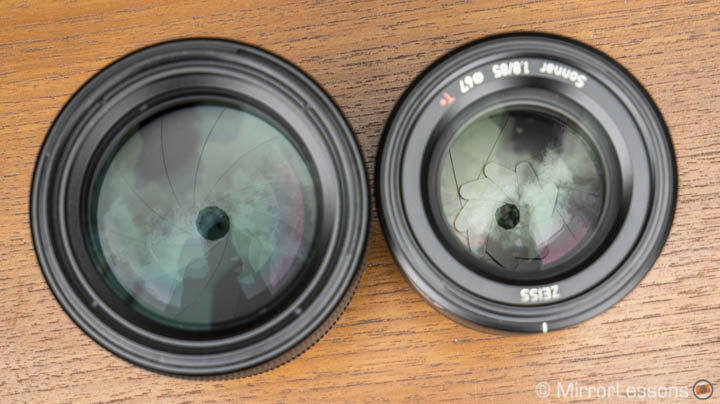 At the fastest apertures, we can notice that the Batis lens produces a swirly effect and cat’s eye shapes near the edges of the frame.

The Sony G Master on the other hand gives you a more precise result. The out of focus circles are more rounded even at the border of the image and the background looks more uniform. The same performance carries on up to f/2.

At f/2.8 the background in the Batis image becomes more uniform. However the bokeh circles are less rounded and start to take on a more hexagonal form. The Sony lens on the other hand retains more rounded circles.

In the third example below you can see a full body shot. This allows us to see how the two lenses perform at longer focus distances in terms of sharpness and their ability to separate the subject from the background.

The fast aperture of f/1.4 gives a shallower depth of field to the full body shot in comparison to the Batis version.

Concerning sharpness, once again the Zeiss lens has an advantage wide open. From f/2 the performance is almost identical. Perhaps the Sony G Master has a little more sharpness but it’s not easy to detect the difference.

These two lenses are not designed for landscapes primarily but I was curious to see if I would notice any difference in sharpness when focusing at infinity. At f/4, f/5.6 or f/8, they both give identical results.

One curiosity about these two lenses: despite claiming to have the same focal length of 85mm, they have a slightly different field of view.

As you can see in this example below, the Batis lens has a narrower angle of view. If I disable the lens profile correction in Lightroom, the field of view is more similar but the Zeiss is still a little bit narrower.

Both lenses can focus as close as 80cm. The Zeiss lens suffers more from vignetting wide open but in both cases fall-off can easily be fixed once the lens profile is applied in Lightroom (or a similar software).

Wide open the Sony lens has more longitudinal chromatic aberration and you will need to fix it manually in post-production. The lens performs better from f/2.8. Chromatic aberration on the Batis lens is more contained even at f/1.8.

Finally, when it comes to flare, the Sony lens can produce a streaky effect in direct sunlight while the Batis 85mm produces more ghost flares.

Concerning the autofocus, both lenses focus fast in single AF or when using the excellent Eye-AF feature of Sony cameras.

In continuous autofocus both lenses give similar results for stills. Interestingly, the Batis lens is faster for video on the A7r II and a6300.

Another relevant difference between these two lenses is image stabilisation.

The Sony 85mm lacks optical stabilisation while the Batis 85mm features it which makes the Zeiss lens a better choice for users who own a first generation A7 or an a6000/a6300 camera.

With the Sony lens mounted on an A7 mark II body, we can take advantage of the 5-axis in-body stabilisation and manage sharp shots down to 1/10s. Using the Batis lens on the A7r II didn’t bring any substantial advantage (it uses 3 axes on the sensor and two axes on the lens) and I got the same result. The optical stabilisation of the Batis alone gave me the same result of 1/10s on the a6300 once again.

The final (and perhaps most important) difference between these two lenses is the price. The Sony 85mm GM costs around $600 more than the Batis 85mm and this aspect will definitely influence the decision of many users.

We’ve seen that the Batis 85mm holds its ground very well concerning sharpness and wide open is actually sharper than the Sony lens. Granted, the Sony 85mm is slightly faster and will give you more shallow depth of field especially when focusing at longer distances (better separation of the subject from the background). However as far as light is concerned the difference between f/1.4 and f/1.8 isn’t even 1 stop.

The most relevant difference concerning optical quality is the bokeh rendering. The Sony gives you a more uniform result with perfectly rounded bokeh circles. The Zeiss lens has a different character with a more swirly effect and cat’s eye shapes wide open but that for me becomes more a question of personal taste rather than a matter of which is better. In short, they are just different.

One additional point in favour of the Sony lens is the ease of use: the buttons and switches as well as the aperture ring enhance the usability of the lens. The focus ring is one of the best I’ve tried for manual focus especially in video mode (with less breathing compared to the Batis lens).

The Batis 85mm has optical stabilisation and that is not something to underestimate especially if the camera you intend to use with the lens doesn’t have in-body stabilisation like a first generation A7 or A7r.

If you are familiar with DSLR lenses, you will already know that there is usually a big difference in optical quality and price between an f/1.8 and an f/1.4 85mm portrait lens. The 1.8 version is usually the more affordable option ($500/600). The Batis is less expensive but also delivers top class results.

Personally I wouldn’t hesitate to go with the Batis 85mm if I had to choose a portrait lens for my A7r II. The Sony 85mm GM is perhaps the ultimate portrait lens for professional photographer but I would consider it only if I was shooting portraits for clients every single day or if I was doing professional video work on a regular basis. For everything else, the Batis is more than enough.

Check price of the Sony 85mm on

Check price of the Batis 85mm on