The Sony APS-C range has faced some neglect as of late due to much of Sony’s focus being funnelled into lens development for the extremely popular full-frame FE system. This is why the announcement of the Sigma 16mm f/1.4, with its 24mm equivalent field of view and fast maximum aperture, was such breath of fresh air for E-mount users.

The Sigma isn’t the first 16mm lens for Sony APS-C however.* In fact, one of the oldest primes for the system is the E 16mm f/2.8, an inexpensive pancake lens haunted by something of a mixed reputation.

Since we had both the Sigma and Sony in for testing at the same time, we decided to put them head-to-head to find out just what the differences are between them!

*There is also a third 16mm prime for the E-mount, the Samyang Rokinon 16mm f/2 manual focus lens.

Ethics statement: We were provided with a sample of the Sigma 16mm and bought the Sony 16mm for our personal use. We were not asked to write anything about these lenses, nor were we provided with any sort of compensation. Within the article, there are affiliate links. If you buy something after clicking the link, we will receive a small commission. To know more about our ethics, you can visit our full disclosure page. Thank you!

If size and weight are important to you, one of the first differences you’ll certainly notice is just how much smaller and lighter the Sony lens is in comparison to the Sigma. This makes sense though, as the Sony, which is classified as a pancake lens, has fewer optical elements and a slower maximum aperture of f/2.8. Although the Sigma is visibly larger, it is also worth pointing out that it is very lightweight for this type of lens. 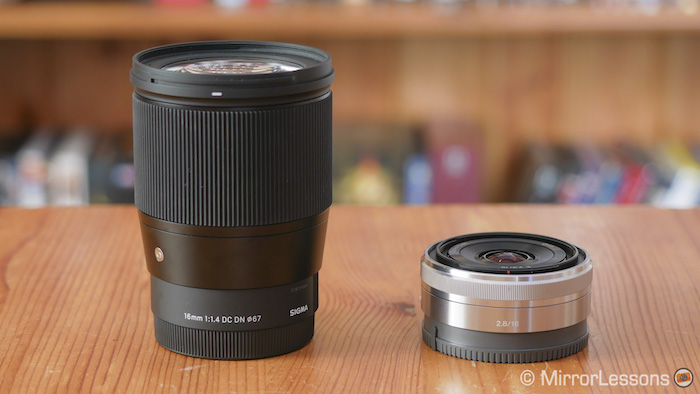 Size and weight wise, we’ve found that either lens is a good match for Sony E-mount cameras, though we hardly need to point out that any camera paired with the Sony 16mm will result in a more discreet and portable combo.

The Sigma is constructed from a mix of plastic, metallic parts, and TSC (Thermally Stable Composite), a material that expands and contracts less in extreme temperatures and offers more elasticity. The Sony features a lightweight aluminium alloy finish. Neither is classified as weather-sealed but the Sigma benefits from a brass bayonet mount that is surrounded by a special sealing to keep dust and moisture out. 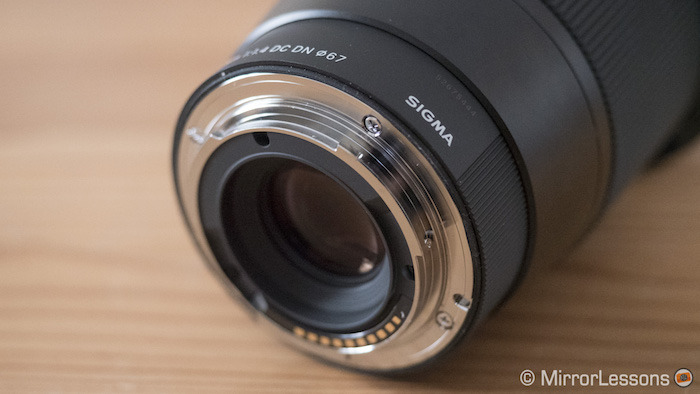 The Sigma is currently only available in black whereas the Sony lens comes in black or silver. 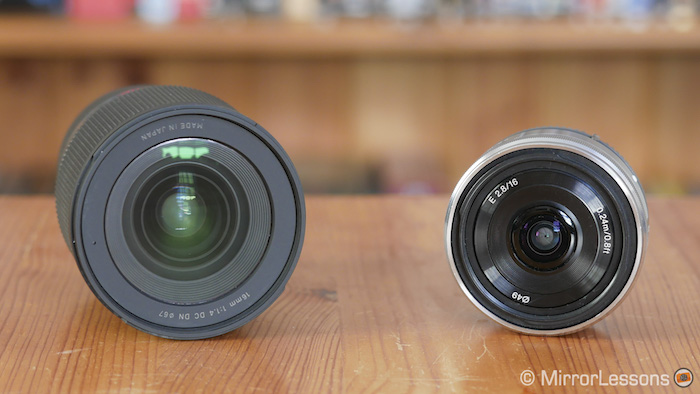 The only physical control you’ll find on the barrels of the two lenses is a ridged fly-by-wire focus ring, which we’ll discuss in more detail in the autofocus/manual focus section below.

On the front of both lenses is a filter thread for ND filters (49mm on the Sony / 67mm on the Sigma) but only the Sigma comes with its own twist-on petal-shaped lens hood (the LH716-01). It can be reversed over the barrel but can be a little difficult to twist off at times.

The Sony lens may not come bundled with a hood but according to Imaging Resource, the hood for the 18-55mm lens is compatible. 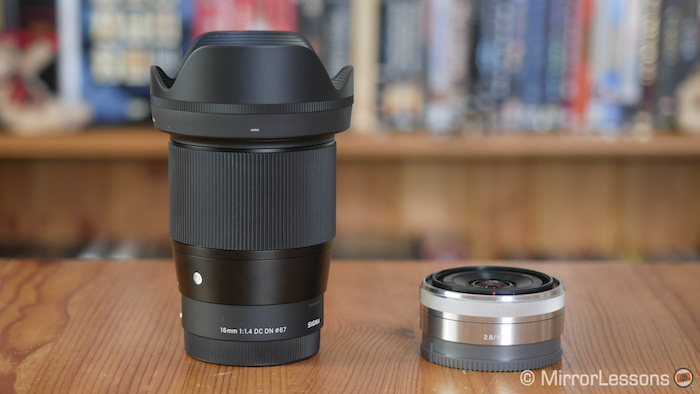 The Sigma 16mm f/1.4 and Sony 16mm f/2.8 have the same focal length which equates to a 24mm equivalent field of view in 35mm terms. Comparing them side-by-side in the field reveals that the Sony is ever so slightly wider but the difference is barely worth mentioning.

I don’t often make sweeping statements about sharpness, as the differences between lenses are often quite subtle, but in the case of these two primes, I can say beyond the shadow of a doubt that the Sigma is much sharper and has better contrast at all aperture values up to f/4. The differences are most striking at the fastest values (f/1.4 and f/2.8).

Below you can find a series of comparison shots taken at a long focus distance close to infinity.

I did initially wonder whether my Sony 16mm sample had a problem but others reviews of the lens have also confirmed that the performance at f/2.8 is disappointing.

Although the performance is closer from f/5.6 onwards, the Sigma does retain some extra sharpness and micro contrast. By f/11, diffraction starts to affect the sharpness of both lenses.

Whereas the Sony peaks at around f/5.6 at the centre, the Sigma’s performance is almost identical from f/2 to f/5.6.

Turning to the corners, we can see the Sony’s performance deteriorate even further, especially at the fastest apertures.

Finally we come to sharpness at a close focusing distance. Interestingly, while the Sigma clearly has an advantage at f/2.8 (and f/1.4 to a lesser degree), the two lenses begin to deliver much more similar results once you stop down beyond f/4. In fact, at f/11, the results are almost indistinguishable.

Because the Sigma 16mm and Sony 16mm are wide-angle lenses, it isn’t particularly easy to achieve a pleasant shallow depth of field unless you focus close to your subject and use the fastest apertures available. That said, even without testing the lenses side-by-side, we know that the Sigma should deliver more eye-catching results because its maximum aperture is two stops faster. Let’s see if this is actually the case!

Looking at the examples below, we can see that the Sigma does indeed produce a smoother, more pleasant background blur than the Sony, especially when used wide open.

Looking more closely at the out-of-focus areas and bokeh quality, we can see that the bokeh balls produced by the Sigma between f/1.4 and f/2 are much larger and cleaner than those of the Sony at f/2.8. Stop the Sigma down to match the f/2.8 aperture and we find that despite having a similar size, the bokeh balls of the Sigma – in addition to featuring fewer “onion rings” – assume the symmetrical shape of the 9-blade aperture.

The difference in rendering becomes even more clear in the following outdoor examples taken on the Aberdyfi pier, where the bokeh of the Sony 16mm is more confusing and less smooth.

According to the official specifications, the two lenses have a similar minimum focus distance (25cm for the Sigma / 24cm for the Sony). However, the Sigma has a higher magnification (0.10x versus 0.078x). The difference can be seen by looking at the two images below. This is due to the Sigma having more focus breathing when focusing at the shortest distance.

With either 16mm lens, you can expect to come across some longitudinal chromatic aberration in backlit scenes or high contrast areas of the image at the fastest aperture values. Between the two, the Sigma seems to suffer more but this is to be expected from fast lenses. Also, most of it disappears in images taken with the Sigma by f/2.8 but with the Sony at this value, it can occur. As always, stopping the lens down can greatly reduce chromatic aberration of this kind.

Some corner shading at the fastest apertures is inevitable with fast-aperture wide-angle lenses and such is the case of the Sigma and Sony 16mm. Apply the appropriate profiles in a post-production software like Lightroom, however, and it almost completely disappears. In fact, the Sigma profile actually appears to overcompensate at f/1.4.

Notice how bright the corners are at f/1.4 (first image) compared to f/1.7 (second image).

The imperfections of Sony E-mount lenses, such as distortion, are either corrected in-camera or via a profile applied in your post production software. The former affects the straight out-of-camera JPGs while the latter influences the look of the RAW files. Usually your post-production software will automatically apply the appropriate profile but it is always worth double checking, just in case it fails to do so. (In Lightroom, you can do this by going to the Lens Corrections tab on the right.) 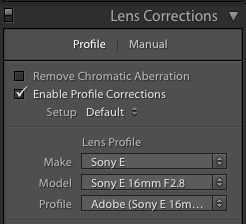 Looking at my samples with the profile applied, I didn’t find distortion to be an issue with either lens. The Sigma does seem to produce a little more barrel distortion than the Sony, but the difference is subtle.

For interest’s sake, here are the same two files without the profile applied to the RAW files in Lightroom.

Flare and ghosting can occur with either lens, especially when shooting in the direction of bright light sources, but I didn’t find it overly invasive. Usually it takes on the appearance of a green orb. Below you can see a couple of the worst examples I encountered during my testing period.

Returning to the scene we used for the field of view comparison, we can see that the Sony lens produces a slightly cooler rendering than the Sigma. Note that the same picture profile (Standard) and white balance (5600K) was used for both images and the light conditions did not change between shots.

Overall I find the rendering of the Sigma more true-to-life than that of the Sony.

Both lenses incorporate an internal focus unit, which is driven by an internal stepping motor on the Sigma and a generic AF motor on the Sony. I found both lenses to be quick in good light, with only a slight deterioration in performance in low light conditions. That being said, because the Sony 16mm is one of the only E-mount lenses that isn’t compatible with Sony’s PDAF (phase detection autofocus) system, you may find that focusing is slower than with the Sigma, particularly when shooting moving subjects.

Happily, the autofocus of both lenses are very smooth and quiet for both stills and video shooting.

As for manual focusing, I find the experience more frustrating with the Sony lens, not only because the fly-by-wire focus ring is so much stiffer than that of the Sigma but also because it is very difficult to judge the focus, even with magnification activated on the screen. The Sigma’s ring is much more precise, not to mention that the rubber ribbing and extra thickness make it easier to grab and twist.

With the Sony, you always have to give the ring a half-turn to travel from infinity to the minimum focus distance. With the Sigma, by comparison, the speed at which you turn the ring affects how quickly you go from one extreme to the other.

Up until recently, the Sony 16mm f/2.8 pancake lens was the only option Sony E-mount users had if they wanted a 24mm equivalent prime (35mm format) with autofocus. Although it does have some advantages, such as an extremely compact construction and a very affordable price point, I admit that everything else about the lens feels outdated, from the optical quality to its AF motor, which isn’t compatible with Sony’s latest PDAF system.

Now that the Sigma 16mm f/1.4 has arrived on the scene, Sony users finally have a high quality 24mm equivalent prime they can rely on. Not only is the optical quality excellent but it is also well-built, PDAF compatible and benefits from a very fast aperture. I believe that all these features combined make it worth the extra expense in comparison to the Sony lens.