You are here: Home / Canon vs Sony / Canon EOS R vs Sony A7 III – The complete comparison 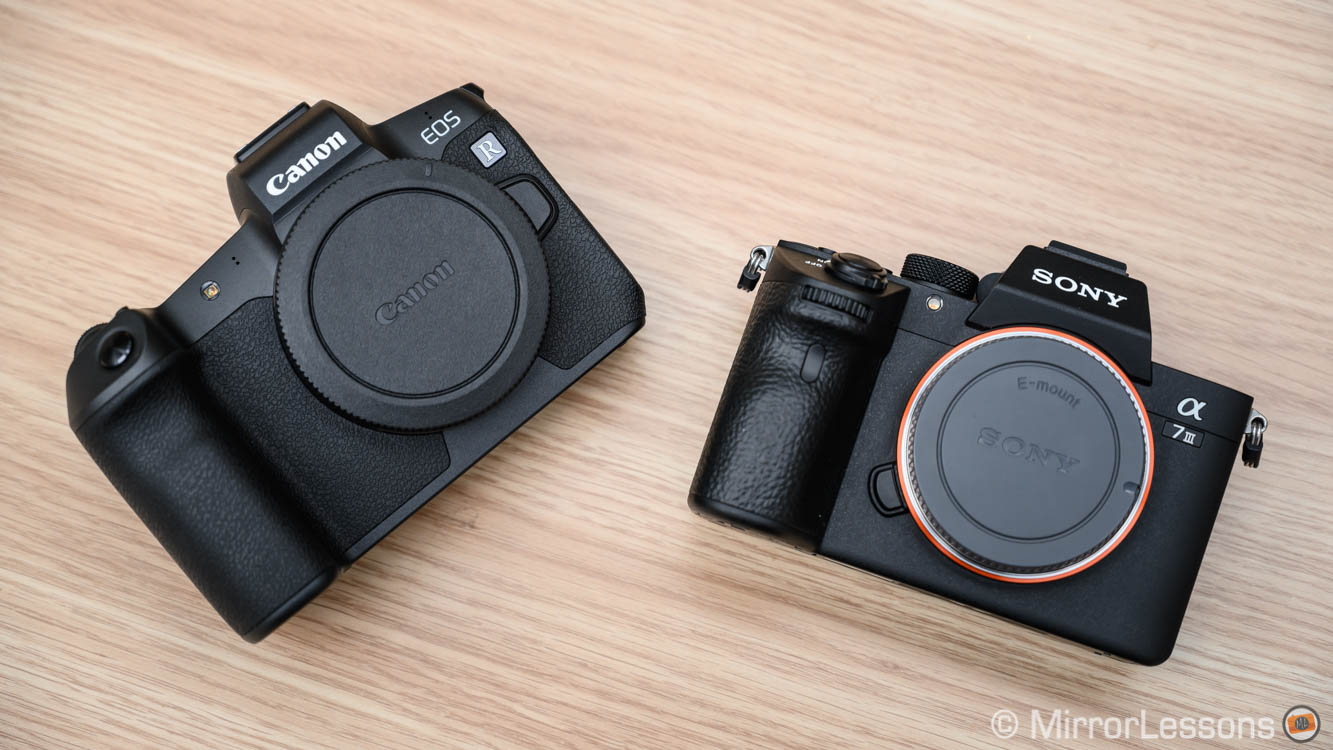 You are now on page 2. Here you can find all our side by side tests concerning image quality for photographs and video:

The Canon EOS R features a 35mm format CMOS sensor with 30.3 megapixels. The A7 III chip is the same size but has 24.2MP and a BSI (back-illuminated) design that allows for more light collection. Both sensors have a low-pass filter and an APS-C mode is available if you attach APS-C lenses.

In terms of sharpness, the extra resolution of the EOS R doesn’t add a substantial advantage, if not extra room to crop. You can increase the sharpness and details of the two RAW files with excellent results.

The EOS R is more prone to moiré, which was unexpected considering that there is an AA filter. It is probably weak so the image processor can’t deal with moiré perfectly.

The Canon offers more settings to control the JPG output. Each picture profile can control sharpness with three different sliders (strength, fineness, threshold) whereas the A7 III offers one parameter with fewer adjustment steps. That being said, the Sony JPGs are crisper as you can see below.

The EOS R can record two RAW formats: RAW and C.RAW. The former is uncompressed whereas the latter is compressed. The A7 III offers the same option (called compressed or uncompressed). All are recorded in 14-bit.

If we look at dynamic range, the A7 III has a clear advantage thanks to its strong shadow recovery. It displays less noise, needs less noise reduction and doesn’t display banding like the EOS R.

The performance of the two cameras is closer with a moderate recovery of around 2 stops, where noise on the Canon file is much more contained. There is still a little bit of colour cast in the darker areas, and the A7 files require less noise reduction once again.

Our third example show clipped highlights outside the window and the Sony wins the test once again: you can recover more information in comparison to the EOS model.

If you want to use straight out-of-camera JPGs, you can increase shadow details on the A7 III with the DR Optimiser setting. The EOS R has an Auto Light Optimiser option but it is very weak even with the highest setting. Either way, none really work well for high contrast scenes such as the one above.

One last note about metering which I find fairly similar on both cameras. The EOS R has four options: evaluative, partial, spot and centre-weighted average. The A7 III has five: Multi, Center, Spot (two sizes available), Entire screen average and Highlight. The biggest disparity between the two models is found when the Highlight option is activated on the Canon, as it under-exposes the scene to protect all the bright zones.

Up to ISO 3200 the quality is similar. Noise is fine and contained, and you don’t need to apply much noise reduction to the RAW files.

From ISO 6400, we start to see a relevant increase in noise from the Canon files. The gap remains small at ISO 12800 but increases from ISO 25600, which is when the EOS R starts to use its extended values.

From ISO 51200, the EOS R is almost unusable and needs more noise reduction to get rid of colour noise, whereas the A7 III continues to deliver better results. The Sony’ final sensitivity of 204800 is the only one that looks bad.

If we look at in-camera noise reduction (JPG files), we can see that the EOS R does a better job than the A7 III of minimising colour noise when NR is disabled. When set to Low, the Sony displays less noise however. With the Normal level, the Canon file is smoother but also a bit softer.

The EOS R has two extra settings: the High NR level eliminates too many details, whereas the Multi-Shot noise reduction mode (multiple frames merged together) gets rid of noise entirely but the loss in sharpness remains.

Both sensors have ISO invariance capabilities but here as well the EOS R files show more limitations. Below are two shots taken at ISO 100 and ISO 1600 (4 stops of difference) with the same aperture and shutter speed, meaning that the ISO 100 image is 4 stops underexposed.

If I recover the brightness in post, the quality matches the image taken at the higher sensitivity, but with the advantage of retaining more highlight information. You can notice however that the Sony preserves more details in the brighter area at ISO 10000.

If you perform additional processing such as opening the shadows, the underexposed image of the Canon shows more visible noise in comparison to the Sony. This highlights the more limited dynamic range once again.

As usual, colours can be influenced by many things including the lens. Looking at the RAW files, the first thing I noticed in Lightroom was that different white balance values were required to produce a similar rendering (higher color temperature on the EOS R).

Looking at the built-in colour profiles, the EOS R seems to prioritise yellow tones whereas the A7 III tends toward a reddish look.

To boost colours, we need to look into more saturated options such as Landscape. The Canon lacks the classic Vivid profile, which is present on the Sony. Curiously, Vivid on the A7 III resembles Landscape on the Canon, whereas the Sony Landscape mode is warmer with a more pronounced yellow shift.

The colour palette difference is reconfirmed with the Neutral profiles. Another interesting thing to note is that the differences between the various profiles of the EOS R aren’t restricted to colours. For example Neutral has less sharpness by default than Standard, and this is quite visible as you can see below. Of course you can change these parameters at any times and save them as new profiles.

The EOS R has other Picture Styles such as Fine Detail and Faithful (Faithful is reddish in colour, making it more similar to the A7 III files). There is also an Auto mode where colour tones are adjusted automatically.

The A7 III has more Creative Styles (13 in total including the monochrome modes). Some of them give quite a different look to your image. For example Clear has more contrast whereas Light increases the brightness.

For skin tones, you can get similar results with the RAW files once again if the same colour profile is applied (Adobe Portrait in this case). The Canon file retains a bit more yellow once again but it isn’t difficult to minimise it.

With the in-camera styles, the Canon colours look more natural with the Standard profile.

I don’t like the Portrait style however: it has more contrast and is not as smooth as the Sony. On the EOS R I prefer the Faithful style in this case.

Among the aforementioned profiles you’ll find a few dedicated to monochrome. The A7 III has two (B&W and Sepia) whereas the EOS R has one with the option of applying five different colour filters to vary contrast and make elements such as vegetation or the blue sky stand out more. With portraits it can also help to reduce contrast.

With Auto White Balance, the EOS gives you the possibility to prioritise the ambient light or white light. The A7 III has the same options plus a Standard mode that is often similar to White priority. The EOS R has a more faithful rendering in each case.

With manual white balance, both models can shift to a green dominant tint more easily under certain artificial lights. The WB Shift option present on both cameras can help you correct that.

The article continues on page 3:

Check the price of the Canon EOS R on:

Check price of the Sony A7 III on: