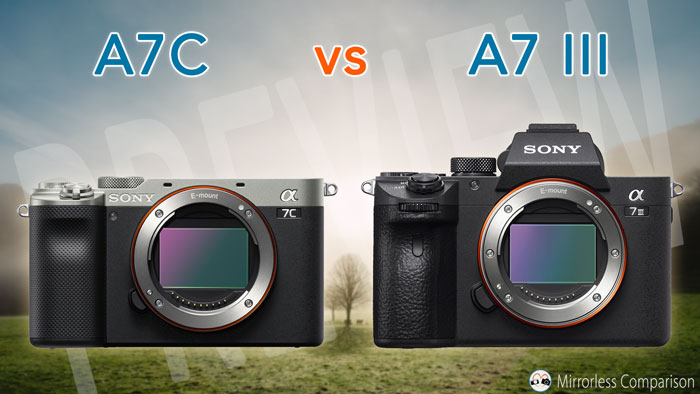 The A7 and A9 series consists of four separate models with a similar design, but different sensors and autofocus capabilities to fit different needs and market segments.

For the first time since the launch of the original A7, Sony has introduced a fifth model name and this time, it’s not about what is inside, but the how it looks on the outside. I wish I could tell you that the A7C has a completely new look, but instead Sony has taken the design of its APS-C cameras and fit a full frame sensor inside.

Is the explanation really that simple? Well, let’s take a look at how the A7C compares to the most popular E-mount camera of all, the A7 mark III.

What the A7C and A7 III have in common:

Ethics statement: The information found in this article is based on official specifications of the A7C and our personal experience with the A7 III. We were not asked to write anything about these cameras, nor were we provided with any sort of compensation. Within the article, there are affiliate links. If you decided to buy something after clicking the link, we will receive a small commission. To know more about our ethics, you can visit our full disclosure page. Thank you!

The A7C takes its design from Sony’s APS-C series. The body is shorter because the viewfinder is positioned on the left side and doesn’t stick out from the main frame, whereas the A7 III has a traditional SLR-esque design with the EVF at the centre.

The A7C is lighter and smaller as you can see from the specifications and image below:

The grip is smaller than the one found on the A7 III.

Both cameras are sealed against dust and moisture. The A7C uses magnesium alloy for the top, bottom and rear cover, whereas the A7 III uses the same material for the front, top and internal frame.

The A7C is available in all black, or with a silver top plate.

The A7 III has more buttons and controls: there are two custom buttons on the top and one on the rear on the far left. There is one extra dial at the front on the grip and the handy AF joystick on the back.

The A7C has been stripped down to the essentials, and it has fewer buttons than the A6600 APS-C camera despite the very similar design.

The movie recording button is found in a different place: on top for the A7C, on the rear near the EVF for the A7 III.

On the main dial on top, the A7C has three memory recall positions whereas the A7 III has two.

The A7 III has two SD card slots, with the first one being compatible with the faster UHS-II standard.

The A7C has one slot only and takes SD UHS-II cards.

By having the EVF on the left and incorporating it into the main body frame, Sony had to use the smaller panel found on its APS-C series. It is a 0.39-in OLED with a magnification of 0.59x and a resolution of 2.36M dots.

The A7 III uses a 0.5-in OLED display with 0.78x magnification and the same resolution of 2.36M dots. The eyepoint is 23mm and the refresh rate about 60Hz.

Sony has been slow to incorporate multi-angle screens on the A7 series (and A6XXX series too), despite video having always played a central role. After the A7S III, it is now the A7C’s turn to feature the same rear panel. It can be opened to the side and rotated 180º to make the camera more vlogger friendly.

The A7 III has a screen that can be tilted up and down only.

Both monitors share the same dimension of 3.0 inches (7.5cm) and a resolution of 0.9M dots.

The A7C benefits from the latest software update that includes real-time tracking and Eye AF for video (the latter only works for stills on the A7 III).

The new camera also has better low light sensitivity at -4Ev (f2 lens) whereas the A7 III is rated at -3Ev (same aperture).

For still photography, Eye AF works for human and animal subjects on both cameras.

The A7C inherits a few settings from the flagship A7S III: in video mode, you can control the autofocus speed and reactivity with the AF Transition Speed and AF Subject Shift Sensitivity, which can be tweaked in 7 steps. The A7 III has similar settings but with fewer control steps.

The one difference worth noting is not a minor one. The A7C can record for an unlimited time (until the card or battery runs out), whereas the A7 III stops after 30 minutes, meaning you need to start a second clip.

Another interesting thing, discovered by YouTuber Sydney Diogzon, is that the A7C can save gyro sensor data in the video files. This means that the video file contains all the information concerning the camera movements while the shot was being recording. With the Sony Catalyst software, you can stabilise the footage using this gyro data and obtain better results than in-body image stabilisation. Filmmaker Brandon Li made a video showing how this technology works on the A7S III.

For audio, the A7C also supports digital audio recording via the Multi-Interface shoe and select Sony microphones such as the ECM-B1M Microphone or XLR-K3M XLR Adaptor.

According to Gerald Undone, the latter cannot be activated or deactivated manually on the A7C. The camera selects it automatically depending on your shutter speed to reduce shutter shock.

Both cameras can shoot a maximum of 10fps with AE/AF tracking, but the A7C has better buffer capabilities.

At full speed, it can record more than 220 JPG Fine or 115 compressed RAW files. The A7 III by comparison manages approximately 163 JPG Fine and 89 RAW.

Note: prices as of September 2020. Tax percentage needs to be added to the US price.

When Sonyalpharumors started to talk about a compact full frame camera a while back, I was curious to see what Sony would come up with.

My first impressions, just by looking at it, reading information and checking out other reviews, is that Sony has made the least effort possible. Rather than imagining a new design and adding new features, it has taken what it already had elsewhere and re-mixed it to create a new full frame segment where C for Compact is the main selling point. (Sony has also released a new pancake kit zoom, the 28-60mm f4-5.6).

Don’t get me wrong, a smaller full frame camera is not a bad idea per se, and I’m sure plenty of customers will like it, whether they are vloggers, travel bloggers or filmmakers looking for a small B-cam to use alongside another E-mount camera. But keep in mind that these dimensions are advantageous only as long as you stick to small lenses (so in addition to the kit zoom, mostly compact 1.8 primes).

So really, choosing between the A7C and the A7 III is a question of design, namely the button layout, LCD monitor and viewfinder. I wish Sony had made a small effort to differentiate the cameras more, at least by implementing a few things we saw on recent models, like the new menu system that can be navigated with the touch screen, or the new Creative Looks profiles that would have suited a camera like the A7C perfectly.

Lastly there is the price. I was expecting a bold move from Sony to challenge the likes of the Canon EOS RP or Nikon Z5. Instead, the A7C price is not so different from the A7 III despite using the same two year old technology. I guess they are confident it will sell, and who knows, they might be right.

Also, I have the feeling that the A7C is one of those products that could be kept on the market with a decrease in price each year. Indeed it could become a long-time best seller like the old A6000 was (sorry, still is!).

Check price of the Sony A7C on
B&H Photo