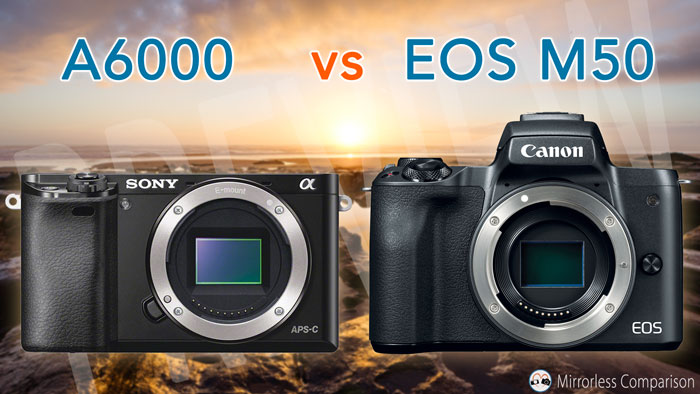 The Sony a6000 may have been released back in early 2014 but it remains one of the most – if not the most – popular mirrorless model on the market.

One of its primary rivals is the Canon EOS M50 whose specifications and price point are quite similar despite the fact that it debuted approximately four years after the Sony model.

If you’re confused about which mirrorless camera to pick, you’ve come to the right place. In this preview, we’ve narrowed down all the main differences between the two cameras so that you can decide which is best for your photographic needs.

Ethics statement: The information found in this article is based on official specifications and our experience with the A6000. We were not asked to write anything about these cameras, nor were we provided any compensation of any kind. Within the article, there are affiliate links. If you decided to buy something after clicking the link, we will receive a small commission. To know more about our ethics, you can visit our full disclosure page. Thank you!

The a6000 is noticeably shorter thanks to its flat-topped design. The M50 has a familiar SLR style because of the protruding EVF at the centre. The Sony is slightly wider but lighter:

Neither has weather resistance. The grip has a different shape, with the one on the A6000 being larger but marginally shorter than that of the M50.

Both cameras feature a PSAM mode dial on top as well as a single control dial for the exposure (on the front around the shutter button on the Canon, on the rear next to the mode dial on the Sony). There is a pop-up flash and a hot shoe on both cameras.

On the rear you will find a four-way pad (which can also be rotated on the A6000) and various buttons.

The A6000 is available in three colours: black, graphite grey and silver. The M50 can be purchased in black or white.

The EOS M50’s viewfinder is found at the centre. It has the same dimensions but more resolution (2,360k) and a slightly shorter eyepoint of 22mm. Canon hasn’t disclosed the magnification factor.

The a6000 has a rear LCD screen that can be tilted up and down (90˚ and 45˚ respectively). It has a resolution of 921k dots and lacks touch sensitivity.

The M50 has a slightly higher resolution (1,040k), features a multi-angle mechanism which means you can flip it to the side and rotate it 180˚, and has touch capabilities as well.

Touch gestures include taking a picture, moving the AF area, and navigating the menu, amongst other things.

The EOS M50 has the same capabilities in 1080p but can also record 4K video at 24p or 25p but keep in mind that the camera applies a severe 1.6x crop on the sensor. This means that the field of view is reduced when recording 4K video (it doesn’t happen with 1080p). Another limitation is that the autofocus only works with contrast detection in 4K which slows down the performance.

The Canon comes with a 3.5mm input for microphones and has electronic stabilisation (Digital IS) which can also work with select lenses and their optical stabilisation.

Both cameras feature an APS-C sensor with 24MP of resolution. One small difference concerns the ISO sensitivity. While both go from ISO 100 to ISO 25600, the M50 can extend the level to 51200.

Both cameras employ hybrid AF technology (contrast and phase detection) but there are important differences to talk about.

The Canon has a better low light sensitivity of -2EV vs 0Ev on the Sony.

There is face and eye detection but Eye AF only works in S-AF mode on both cameras.

Phase detection is available for video too but as stated above, the M50 uses contrast detection when recording in 4K.

The A6000 can shoot as fast as 11fps in single and continuous autofocus.

The M50 is slightly slower at 10fps with focus locked on the first frame. If you want continuous AF (servo AF in Canon terms), the speed decreases to 7.4fps.

The M50 has a silent shutter option (electronic mode). It is only available when selecting one of the various scene modes, which means that it doesn’t work with manual exposure control. It can’t be used with continuous autofocus or continuous shooting either.

The A6000, being an older model, doesn’t have a silent mode option.

If you choose the A6000, you can count on a wider selection of lenses for the E-mount system. It is not the most complete you can find but there are fast primes, the recent 16-55mm 2.8 zoom, various telephoto zooms and a few good options from Sigma as well. There is also a wide range of full frame lenses although some can be quite large and expensive.

The EOS M system has a decent selection but keep in mind that there are only two primes with a fast aperture: the 22mm f/2 pancake and the 32mm f/1.4. Sigma is making its DN Contemporary series available for the EOS M mount which is good news. Unlike Sony though, you cannot take advantage of the RF full frame lenses because the mount is different.

You can adapt DSLR lenses to both cameras but keep in mind that the performance on the Sony will be slower. Also, there is the size/weight factor to consider with such compact and lightweight cameras.

The A6000 has been around for a long time yet it still manages to top the best seller list every year thanks to its reduced price. Despite its age, it offers good image quality and autofocus performance by today’s standards. Personally I think its weakest point is usability: it is not as straightforward as the Canon and the menu system in particular is quite confusing.

The M50, like most of its siblings in the M series, is well-designed and very easy to use thanks to more modern features such as the touch screen. It boasts good characteristics and perhaps the only real negative is that some features like 4K video are limited.