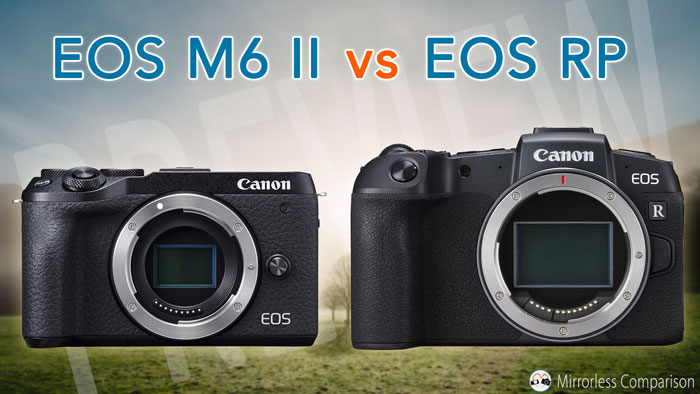 Two of the most recent mirrorless cameras from Canon are the EOS M6 II, the flagship in the EOS M range of cameras with an APS-C sized sensor, and the EOS RP, an affordable mirrorless camera with a 35mm sensor (full-frame). Although they share a number of characteristics, there are some important ways in which they differ, starting of course with the sensor. Let’s take a look at them now!

Ethics statement: The information found in this article is based on our experience with the RP, official specifications and press releases. We were not asked to write anything about these cameras, nor were we provided any compensation of any kind. Within the article, there are affiliate links. If you decided to buy something after clicking the link, we will receive a small commission. To know more about our ethics, you can visit our full disclosure page. Thank you!

The new EOS M6 II houses a new sensor with the highest resolution (32.5MP) of all APS-C models. The RP uses a larger sensor (35mm format) but it is two years old and has a lower resolution of 26.2MP.

Both cameras utilise the DIGIC 8 processor, which is the latest iteration.

Located at the centre of the EOS RP in the traditional SLR style is a built-in electronic viewfinder. It is a 0.39-inch OLED type with 2.39 million dots, 100% coverage, 0.70x magnification and a 22mm eye-point.

Like the M6 that came before it, the new M6 II lacks a built-in viewfinder but for an extra $200, you can purchase the optional EVF-DC2 and attach it to the hot shoe. The EVF-DC2 has the same specifications as the RP’s viewfinder.

Both cameras feature a 3-inch ClearView LCD II touch screen with 1040k dot resolution. The main difference is that the M6 II tilts up 180 degrees and down 45 degrees whereas the RP employs a multi-angle type that flips out to one side. It has a total viewing angle of 170° making it a great choice for video work.

The full-frame model is both bigger and heavier than the M6 II which should come as no surprise. You can see the exact measurements below:

The larger dimensions are partly due to the more substantial grip out front which makes it easier to hold. The M6 II has a decent grip but I’d be less inclined to use it with long telephoto lenses.

The two cameras have a similar set of dials and buttons including a rear control wheel, exposure dials on top, and a PSAM mode dial. Only the M6 II has a pop-up flash (located on the left-hand side of the body) and an AF/MF switch on the rear.

The RP features dust and water resistance whereas the M6 II lacks all weather sealing.

It should come as no surprise that both cameras sport Canon’s much loved Dual Pixel CMOS AF system, a sensor-based phase detection AF technology designed to provide smooth, high-performance focus tracking for stills and movies.

The full-frame model provides a total of 4779 selectable AF positions across the frame, whereas the M6 II provides up to 5481 points. Note that these points are available when selecting a single area manually. With other focus settings, the cameras will group the points (143 areas on the M6 II, not sure about the RP as I couldn’t find the specifications on the website).

Both cameras have an AF working range of EV -5 to 18, Spot and Zone AF modes, and Face + Eye detection. Unlike other models, both the M6 II and RP can activate Eye AF with continuous autofocus in stills and video mode.

The continuous shooting speeds of the RP are far less impressive than those of the M6 II. At its maximum speed, it can only reach 5fps (fixed AF) or 4fps with AF tracking but on the plus side, the camera will continue to shoot JPGs until the card is full.

The M6 II, by comparison, can shoot at an impressive 14fps with AF tracking for up to 54 JPG frames or 23 RAW frames. This makes it the better action camera of the two.

It is also worth mentioning that only the M6 II has a true silent electronic shutter option in the menu. With it activated, you can shoot at speeds up to 1/16,000s.

For reasons inexplicable, the silent shutter is only available as a Scene mode on the RP. This means that you cannot use it with the manual / aperture / shutter priority exposure modes.

They share the same mechanical shutter speed range of 30 seconds to 1/4000s.

Both cameras offer 4K video but whereas the RP is limited to 24 or 25fps, the M6 II can shoot at 25fps or 30fps (but not 24fps for some reason). Also on offer from the M6 II is Full HD at 120fps, albeit with no sound or autofocus (and the slow motion footage is created in camera). The RP can only go as fast as 60fps.

Unlike the RP which performs a severe 1.75x crop in 4K, the M6 II uses the full width of the sensor – a first for Canon mirrorless cameras. They share a maximum recording time of 30 minutes and a 4K timelapse mode.

Continuous autofocus and Face+Eye detection are available on both cameras but the EOS RP switches to contrast detection when recording 4K, which means that the performance is much slower than with Dual CMOS AF.

The EOS M6 II uses the LP-E12 battery which will give you approximately 305 shots on one charge or 410 shots in Eco mode.

The EOS RP’s LP-E17 battery can manage between 240-250 shots on one charge depending on the temperature and enabling the Eco mode will extend this to 270 shots.

Both cameras can be charged via USB.

The RP was released earlier this year which means it is still rare to find it for less than its original retail price of approximately $1300 US (body only) or $2200 US (with the 24-105mm).

The choice between the EOS M6 II and EOS RP is fairly straightforward considering that they target very different user bases.

The former is an affordable and portable option with a balanced set of specifications including a high resolution APS-C sensor, a tried and tested phase detection AF system, fast burst speeds and 4K video at 30fps.

The latter is for those who desire a full-frame camera that won’t break the bank. It suffers in the burst speed department and fails to offer competitive 4K video specifications but it provides good image quality, not to mention the look and versatility of a full-frame sensor.

Check price of the Canon EOS RP on