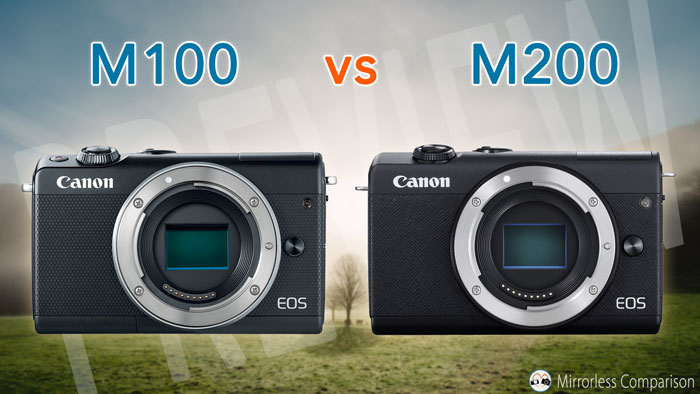 Canon has just announced the new EOS M200, the successor to the M100 released over two years ago in 2017. It takes its place as the entry-level model in Canon’s range of EOS M mirrorless cameras with an APS-C sensor.

In this preview, we’re going to investigate all the main differences between these two models to help you figure out whether it makes more sense to choose the new model or its predecessor. Let’s begin!

Ethics statement: The information found in this article is based on official specifications from the Canon website. We were not asked to write anything about these cameras, nor were we provided any compensation of any kind. Within the article, there are affiliate links. If you decided to buy something after clicking the link, we will receive a small commission. To know more about our ethics, you can visit our full disclosure page. Thank you!

Despite both cameras housing an APS-C sized sensor, that of the M200 is more recent and has more AF points (see further down). It also has ever so slightly less resolution than the one found inside the M100 (24.1 vs 24.2MP). In the real world, you will not notice a difference between the images produced with these cameras.

The M200 comes with Canon’s most recent DIGIC 8 image processor, which is a step up from the M100’s DIGIC 7 processor. The updated version enables the camera to support 4K movie recording, more AF points, an improved battery life and eye detection for video, all of which we’ll discuss in more detail below.

Although both cameras employ Canon’s extremely effective Dual Pixel CMOS AF system, the M200 boasts a higher number of AF points across the frame. Whereas the M100 only offered a maximum of 49 points, the M200 can reach 143 points with certain lenses or 25 points in Zone AF (vs 9 on the M100). This will allow for more precision when focusing on small subjects in the frame.

The new camera also sports a marginally better AF working range of -4 to 18 EV versus -1 to 18 EV on the older model. This means that it should be more capable of focusing correctly in low light situations.

Unlike the M100 which was limited to video recording in Full HD 1080p at up to 60fps, the M200 benefits from 4K at 24 or 25fps (but no 30fps option). However when shooting in 4K, be aware that the camera performs a severe 1.6x crop and cannot be used with Dual Pixel CMOS AF. Contrast detection is used instead, which will result in slower focusing.

A welcome addition to the M200 is Eye Detection AF which works with Dual Pixel CMOS AF. This feature is designed to help you achieve more accurate focus on the eyes when a person is in the frame.

In order to keep pace with the modern world, Canon has added a vertical video feature to the M200 which allows you to shoot in vertical format for Instagram and Facebook.

Speaking of the physical movie record button, it has also been moved from the top to the rear on the new model as you can see from the images below.

As mentioned in the processor section, the M200 boasts a marginally improved battery life. It can take up to 315 shots on one charge (CIPA standards) or 485 shots in Eco mode. The M100, by comparison, can manage up to 295 shots on a single charge. Both cameras use the same LP-E12 battery.

The EOS M100 was already quite affordable but it will surely come down in price even more now that its successor is on the market. You can currently find it for around $450 US with the same kit lens.

Overall it appears that the EOS M200 is a subtle upgrade over the EOS M100, with the main differences being the addition of 4K video – albeit with a significant crop and no Phase Detection AF – and more AF points across the frame.

My preliminary verdict is that the M200 doesn’t merit an upgrade over the M100 if you already own it but could be worth considering if you are searching for an entry-level model and like the idea of the various improvements it has to offer.

Check price of the Canon EOS M200 on B&H Photo