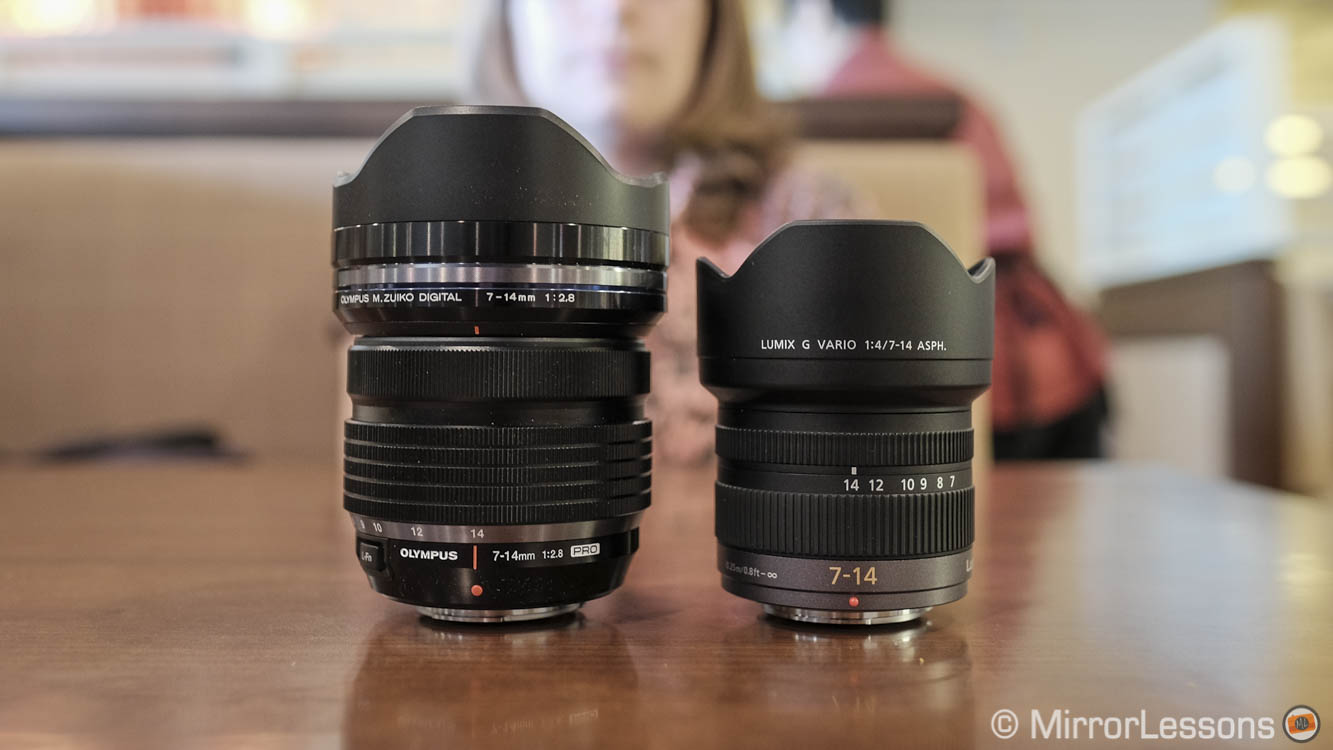 Last year, while we were visiting Canada and reviewing the M.Zuiko 7-14mm f/2.8, we had the chance to compare it to the Lumix 7-14mm f/4 over the course of a very hot and sticky August afternoon. We conducted this comparison because many of you had expressed a curiosity about the differences in optical quality between these two lenses. A special thanks goes out to Aden Camera in Toronto for kindly lending us the Lumix lens at the time. It’s definitely a camera store worth checking out if you live in the area or if you are visiting the city.

I had used the Lumix lens in the past for a couple of photo assignments (architecture and events) and also found it handy for video work when I was shooting with the old Panasonic AF101. At the time of its release, which was now almost 7 years ago, the Lumix lens was the only native extreme wide-angle zoom with a constant aperture available for the system until Olympus released its 2.8 version in May 2015.

Ethics statement: We were provided with samples of the Panasonic and Olympus for a brief loan period. We were not asked to write anything about the lenses in exchange for the opportunity, nor were we provided with any sort of compensation. Within the article, there are affiliate links. If you buy something after clicking the link, we will receive a small commission. To know more about our ethics, you can visit our full disclosure page. Thank you!

As you can see from the image above, there is a clear difference in size and weight (534g vs 300g). The Olympus lens is part of the M.Zuiko PRO family. It comes with a metal build that is dust, splash and freeze proof, a focus ring with a clutching mechanism to instantly switch from autofocus to manual focus and a customisable L-Fn button on the side. The size of the lens can unbalance smaller cameras such as the OM-D E-M10 II or the Lumix GX85. The prominent grip of the OM-D E-M1, Lumix GH4 or Lumix GX8 makes a difference in this case.

The Lumix 7-14mm has a lighter construction (metal and plastic) and is not weather-sealed. Its size makes it more suitable for small Micro Four Thirds cameras including the Olympus Pen series or the Lumix GM series.

Both lenses have a built-in hood. Since the front lens protrudes a lot, it isn’t possible to directly screw a circular filter onto the lens. A few third party independent manufacturers are selling adapters to allow you to use filters but we haven’t tested them.

I took a few comparison shots downtown using the OM-D E-M5 mark II. Please note that I didn’t have time to perform an in-depth test so I concentrated on finding the most relevant differences in terms of distortion, sharpness and flare.

Whenever it is necessary to pixel peep to find relevant differences, it means that the lenses perform in a very similar manner. This is the case with these two wide-angle zooms.

Concerning sharpness at the centre, both lenses perform in a similar way at their respective fastest apertures and up to f/5.6. However the Lumix lens performs slightly better at f/8.

At the corners the results are similar once again. The M.Zuiko lens is ever so slightly sharper at f/2.8 and f/4 but at f/5.6 we can notice that the Lumix lens performs better.

The Olympus lens has some clear advantages in terms of flare resistance and also less chromatic aberration. The Lumix 7-14mm tends to produce bigger green and rainbow ghost flares while on the M.Zuiko 7-14mm they are less invasive.

As for the close focusing capabilities, the M.Zuiko lens wins here as well. It focuses closer (7.5cm vs 25cm) and you also get the advantage of the f/2.8 aperture to produce a more pleasant bokeh.

Concerning distortion, the difference is less significant than I would have originally thought. The Olympus lens keeps the vertical lines straighter at the edges which could also be linked to the distortion correction applied by the camera processor. The difference is ever so slight and I found the same results for both the JPGs and RAW files. It would have been interesting to do the same test on a Lumix camera to find out if the E-M5 mark II corrects the M.Zuiko lens more than the Lumix version. But either way, the differences aren’t that noticeable as you can see in the examples below.

At 14mm, the Olympus lens has a little more barrel distortion than the Lumix lens but again the difference is minimal.

What is also interesting is that the composition slightly changes between one lens and the other even when set to the same focal length. I used a tripod to take all my images so I can assure you that I didn’t move the camera between shots.

I realise this is not a complete comparison but it does give you a good idea of the differences between these two wide angle lenses.

The Lumix 7-14mm proves to be excellent despite being a much older lens.

It competes very well concerning sharpness and distortion and is even slightly sharper at the corners and in the centre at the mid-range aperture values. The relevant advantage of course is the size and weight. Those who prefer to keep their gear compact will lean towards the Panasonic lens. Its main disadvantage is ghost flares which are more invasive than those of the Olympus lens.

The Olympus lens has the obvious advantage of having a faster aperture. It performs well concerning sharpness at f/2.8 at the centre while the corners get better from f/4. Since the Olympus lens already offers good performance across the frame from f/4, that extra stop of light can make all the difference when shooting in low light.

Keep in mind that if you own an OM-D or Lumix camera with sensor stabilisation, you can compensate for the lack of light with a slow shutter speed (unless you need a reasonable speed because of moving elements). The M.Zuiko 7-14mm is also more versatile thanks to its minimum focusing distance and bokeh capabilities. Its weather-sealed body will protect the lens from inclement weather conditions.

Both lenses focus fast although the Olympus lens seems faster to me especially when used on the E-M5 II. The retail price isn’t that different (around $300). However, since the Lumix 7-14mm is older, you can probably find it at a reduce price or second-hand.

The first three images were taken in Toronto with the Olympus lens. The other three were taken with the Lumix lens inside the National Cinema Museum in Turin during the Martin Scorsese’s exhibition when I was working as the museum’s official photographer.