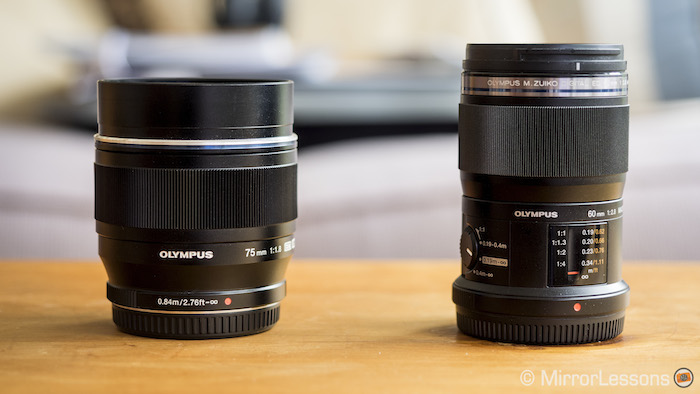 Portrait lenses with an equivalent focal length of 85-90mm in full-frame terms are a dime a dozen in the Micro Four Thirds range but there is currently only one long telephoto prime for portraits: the M.Zuiko 75mm f/1.8. Its equivalent focal length of 150mm is a good compromise since it allows you to achieve good compression and background blur, yet doesn’t place you too far from your subject that it becomes difficult to communicate.

But what about the M.Zuiko 60mm f/2.8 whose primary genre is macro? With an equivalent focal length of 120mm in full-frame format, it too fulfils the requirements of a tele-portrait lens despite its fastest aperture being somewhat slower than desirable.

Can the M.Zuiko 60mm work as a viable telephoto portrait alternative to the 75mm? In this comparison, we’re going to find out!

Ethics statement: We own both the M.Zuiko 60mm and 75mm. We were not asked to write anything about the lenses, nor were we provided with any sort of compensation. Within the article, there are affiliate links. If you buy something after clicking the link, we will receive a small commission. To know more about our ethics, you can visit our full disclosure page. Thank you!

Both the 60mm and 75mm are classified as M.Zuiko Premium primes, of which there are currently six in total. 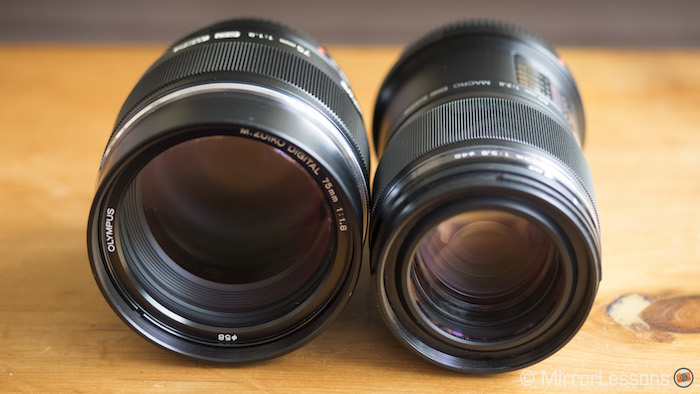 The 75mm is the bigger lens in terms of both weight and dimensions due to its faster aperture and metal build. However, as portrait lenses with a bright f/1.8 aperture go, it remains very compact at only 305g and 64mm from mount to tip. In contrast, the 60mm weighs just 185g and stands 56mm tall.

The 60mm is an excellent fit for any Micro Four Thirds camera, while the 75mm is better suited to larger models such as the Olympus OM-D series or the Panasonic GX8 / GH4. Due to the extra weight, the 75mm may slightly unbalance the smaller models in the Olympus Pen or Panasonic GF or GM series. 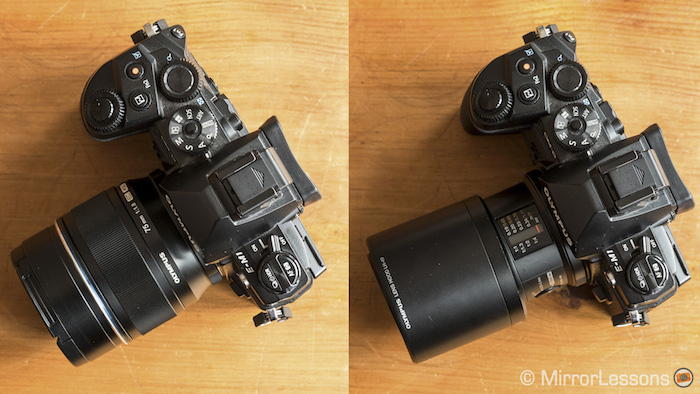 Unlike the 75mm, the 60mm features a dust and splash resistant construction, making it a good match for weather-sealed Micro Four Thirds bodies.

Both have a ribbed “fly-by-wire” manual focus ring that is wide and easy to turn. The 60mm also benefits from a 4-position focus limiter switch on the side of the barrel. With it, you can prevent long-distance hunting when shooting macro subjects and vice versa. It is flanked by a combined magnification and distance scale. 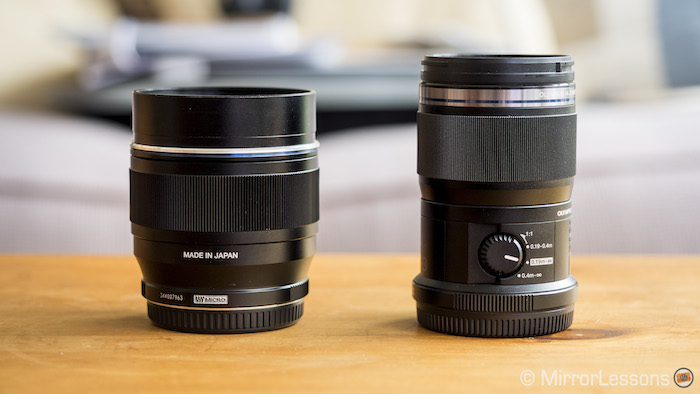 It goes without saying that the 60mm, being primarily a macro lens, can focus closer than the 75mm (19cm versus 84cm) and provides higher magnification (1.0x versus 0.10x).

Both sport an inner focus mechanism that delivers quick and silent autofocusing for stills and video and a filter thread which measures 49mm on the 60mm / 58mm on the 75mm. Neither comes with built-in optical stabilisation, so it is best to use them with stabilised bodies.

Sadly, neither lens comes packaged with its official lens hood, so they must be purchased separately. The 75mm’s official lens hood is metal, locks in place with a metal screw, and extends the height of the lens to 69mm. The 60mm’s is a unique sliding lens hood that you can retract over the barrel when you aren’t using it. Fully extended, it brings the height of the 60mm to 82mm. 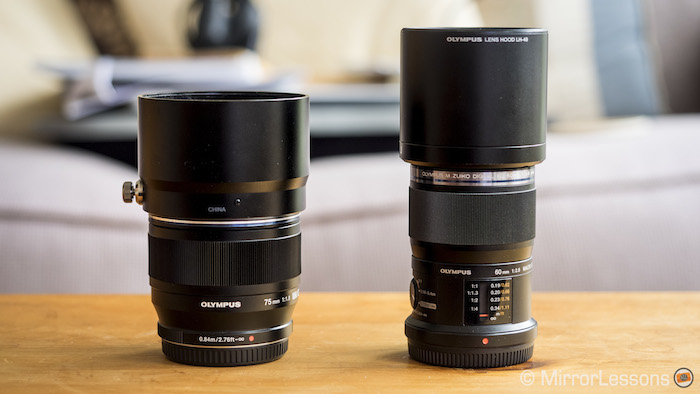 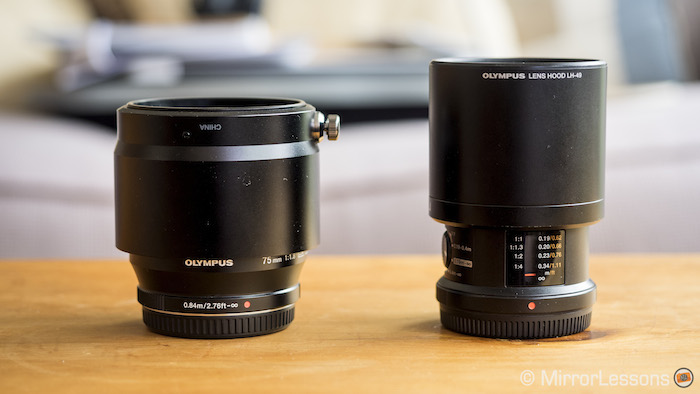 Optical Quality – Through the lenses

To test the sharpness of the two lenses, I took a series of images at the various apertures at a short distance, followed by a long distance.

To my surprise, the results were almost identical at all apertures at a short distance (around 2m away from the subject). The 60mm appears a shade sharper between f/2.8 and f/5.6 but the difference is only noticeable if you pixel-peep 100% crops.

The optimum sharpness of both lenses appears to be somewhere between f/4 and f/5.6, but f/2.8 and f/8 perform in a very similar manner. Diffraction begins to show at around f/11 and both generate noticeably soft results by f/16.

As for their respective fastest apertures – f/1.8 on the 75mm and f/2.8 on the 60mm – you’ll notice that the 60mm is sharper but the difference is once again minute.

Since these lenses can also be used for telephoto landscape photography, I took a second set of comparison shots at a longer distance. Interestingly, the difference at f/2.8 becomes even more pronounced, with the 60mm displaying better overall sharpness than the 75mm at the centre. From f/4 to f/8, however, the opposite appears to be true: the 75mm shows better sharpness across the frame.

Chromatic aberration is well-controlled at f/2.8 and beyond on both lenses but the 75mm can display some purple fringing at its fastest apertures (f/1.8 and f/2). The series of 100% crops below show how chromatic aberration can manifest itself in strong backlight at these apertures.

As for flare, I’ve only ever noticed it in strong backlit situations such as the one below.

Finally we arrive at the section that will be of most interest to those reading: the portrait performance comparison.

To briefly recap, the 60mm is marginally sharper than the 75mm between f/2.8 and f/5.6 but it takes some serious pixel peeping to see the differences. Happily, the 75mm’s fastest aperture of f/1.8 is almost as sharp as f/2.8.

Since the 75mm is longer than the 60mm and has a brighter maximum aperture, we would expect it to have a smoother bokeh with larger and rounder specular highlights (bokeh balls), and this is indeed the case.

Comparing a very similar composition taken with the two lenses, you’ll notice that at f/2.8, the bokeh balls of the 75mm are slightly larger and rounder, and maintain a more circular shape even at the edges of the frame than those of the 60mm.

At f/1.8 and f/2, the background becomes even smoother and the bokeh balls become even larger. They lose their perfectly rounded shape at the extreme edges of the frame but the rendering is still very attractive.

Below is the full series shown side-by side. Click on the image to see a high resolution version.

This second series of images featuring Mathieu demonstrates that the 75mm is more capable than the 60mm of separating the subject from the background, once again because of its fast aperture and focal length. Still, the 60mm at f/2.8 defends itself well, providing decent subject isolation if the elements in the background are far off in the distance.

Just for fun, I briefly compared the macro performance of the two lenses. As a reminder, the 60mm is capable of 1:1 macro at a minimum focus distance of 17mm while the 75mm is only capable of 0.10x magnification, focusing as close as 84cm.

To turn the 75mm into a semi-macro solution, an easy work-around is the Raynox 250 macro adapter. With it attached, you can focus almost as close as with the 60mm.

Interestingly, the 60mm displays much more uniform bokeh balls near the edges when you use it at macro distances as opposed to portrait distances, such as in the image below. The seven blade aperture gives them a hexagonal shape.

We’ve owned both the M.Zuiko 60mm and 75mm for over two years now, and have always found the autofocus to be fast, silent and accurate, especially when paired with the phase detection autofocus system of the Olympus OM-D E-M1.

For portraits, you will get the best results on both Olympus and Panasonic cameras by choosing the smallest AF point and placing it directly on the eye of your subject.

While the 75mm will quickly lock onto your subject regardless of the distance, the 60mm performs better for portrait work if you switch the focus limiter to 0.4m – ∞. Leaving it to 0.19 – ∞ may cause the lens to hunt. Likewise, if you are shooting macro, you’ll get the best results by switching to 0.19 – 0.4m or 1:1.

The 75mm is also a great companion for action photography because its bright aperture allows you to maintain fast shutter speeds, even in challenging light conditions.

Below you can see a quick action series taken with both lenses on the OM-D E-M1. Green means perfectly in-focus, Yellow means partially in-focus, and Red means out-of-focus. Both lenses were set to f/2.8 and the camera settings were: 1/1000s, C-AF, Single Point, High Burst (11fps).

The manual focus experience is good with both the 60mm and 75mm, especially when combined with the focus peaking and magnification of Olympus or Panasonic cameras.

For portraits, it is rare you’ll ever have to use manual focus because the autofocus is so quick and reliable. However, if you really want to fine-tune your focus, the “fly-by-wire” focus ring is more than adequate to do the job.

As for macro photography with the 60mm, the manual focus ring helps in adjusting the initial focus distance. Then, once you’re happy with the distance, you can make fine adjustments by physically rocking back and forth until the subject comes into focus.

It was clear even before starting this comparison that between the two primes, the 75mm is the better portrait lens. Thanks to its bright f/1.8 aperture and 150mm equivalent focal length, it renders a smoother background with more pleasant out-of-focus areas and proves itself more than capable of isolating a subject from the background.

However, for casual portrait work, there is no reason you shouldn’t consider the 60mm macro, especially if you’re only just starting to dabble in the portrait genre. It is just as sharp (if not marginally sharper) than the 75mm at all the most important apertures and is long enough to compress perspective and blur the background as long as you use its f/2.8 aperture. You won’t get any of the beautiful specular highlights of the 75mm but creamy backgrounds are possible with the right composition.

Finally, there is the issue of price: the 75mm is the more expensive of the two, costing in the region of $900 versus $500 for the 60mm. If you shoot both macro and portraits and are on a tight budget, the 60mm is a great starting point but the 75mm is the logical step-up for someone who takes the portrait genre seriously.

Check price of the M.Zuiko 60mm on

Check price of the M.Zuiko 75mm on

You may also be interested in the following articles: