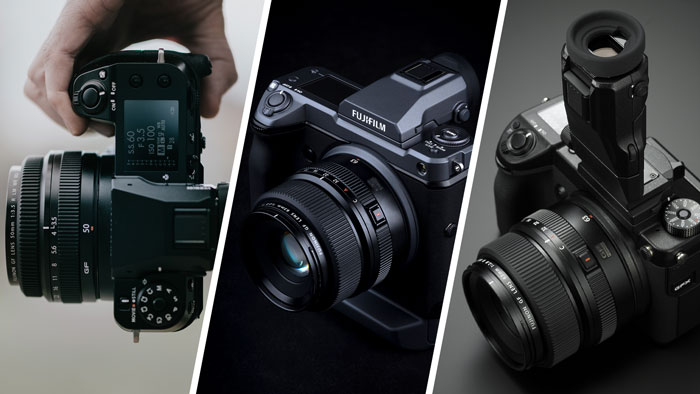 The Fujifilm GFX100, released in 2019, pushed the boundaries of medium format thanks to a much improved autofocus and professional video capabilities. Less than two years later, the GFX100s incorporates the same technology in a smaller and much less expensive package.

We decided to compare these two cameras together with the one that inaugurated the GF-mount series, the original GFX 50s that was announced at Photokina in 2016.

Ethics statement: The following is based on our personal experience with the GFX 50S and Fujifilm’s official information about the GFX100 and GFX100s. We were not asked to write anything about these products, nor were we provided with any sort of compensation. Within the article, there are affiliate links. If you buy something after clicking the link, we will receive a small commission. To know more about our ethics, you can visit our full disclosure page. Thank you!

This is one of the main differences between these cameras, especially when it comes to the two “100” models.

The GFX100 is much larger because it incorporates a vertical grip. Naturally, it is also heavier. The 50s and 100s cameras are more similar.

The three cameras have a magnesium alloy skeleton and are fully weather sealed.

As for the controls, the 50s feature dedicated ISO and shutter speed dials on top. On the 100 series, you use the front and rear command dials instead.

The GFX100 has a Still / Multi / Movie switch on top whereas the 100s has the traditional shooting mode dial with no fewer than six customisable positions. There is also a smaller still/video switch next to it.

The three of them have an AF joystick. The one the 100s has been redesigned and has a flat shape. The 50s is the only one with a 4-way D-pad on the rear.

The GFX 50s and GFX100 have a distinctive characteristic: the viewfinder can be removed, and the optional EVF-TL1 adapter allows you to tilt the viewfinder in various positions. The viewfinder of the GFX100s is fixed.

On the rear, the three cameras have the same 3.2-inch LCD that can tilt it in three directions: 90˚ upward, 45˚ downward and 60˚ to the right. It has 2.36M dots of resolution and is touch sensitive.

On top, you will find a secondary LCD that displays various information and can be customised. The one on the 100 series is larger (1.8-in vs 1.28in) and can display more things like a histogram or virtual exposure dials.

Only the GFX100 has a third sub monitor on the rear, in the built-in vertical grip area below the main LCD. It can display a certain number of things including the histogram.

The two 100MP cameras have the latest image engine (X-Processor 4) and can shoot 16-bit RAW files, whereas the 50s works at 14-bit.

The two 100 models have extra settings to configure the image such as for example Colour Chrome FX Blue.

The 102MP sensor features phase detection, and the two GFX100 cameras use a total of 3.78 million points that are distributed across most of the sensor surface.

The 50S has contrast detection only and as a result it not as fast as the two “100” models when it comes to focus acquisition and general speed.

The three cameras include face and eye detection. In the press release, Fujifilm claims to have improved the tracking algorithm on the new GFX100s. It is likely that a firmware update will put the GFX100 on the same level, whereas that might not be the case for the 50s given the different AF technology.

The GFX100 was the first medium format camera with in-body 5-axis stabilisation.

The GX100s becomes the second to share this technology. It has a newly designed unit that is 20% smaller and 10% lighter, yet provides a slightly higher compensation rating of 6Ev vs 5.5Ev on its bigger brother. The algorithm as been improved to improve the performance in comparison to the GFX100 (although I suspect the updated algorithm can be added via firmware).

Furthermore, the GFX100 and GFX100s can use the sensor shift technology to increase the resolution to 400MP thanks to the Pixel Shift Multi-Shot function, where 16 RAW files are captured with the sensor moving its position by one pixel between each shot, and then combining the images into one. This mode also increases colour resolution because each pixel is captured by at least one red, green and blue pixel.

The GFX100 and GFX100s can shoot at a maximum of 5fps in CH mode, or 2fps in CL mode. These speeds may not look impressive, but remember we’re talking about medium format cameras with 100MP!

The GFX 50S goes up to a maximum of 3fps. At that speed, focus is locked on the first frame however.

Since the launch of the GFX100, Fujifilm has made medium format more accessible to video makers, not only because of the price, but also thanks to advanced specifications found for the first time on such a product.

Unsurprisingly, the sister model GFX100s features the same capabilities. The two 100MP cameras can record 4K up to 30fps in 10-bit 4:2:0 (HEVC codec, H264 also available) and a maximum bitrate of 400Mbps. With an external recorder such as the Ninja V, you can acquire 10-bit 4:2:2 footage or even the Prores RAW format (firmware 2.0 required for the GFX100).

Other popular settings such as Cinema 4K (17:9 aspect ratio), F-Log and HLG curves are available.

Interestingly, the new GFX100s has a maximum recording time of 120 minutes per clip, whereas the GFX100 does half, meaning 60 minutes per clip. Here as well I’m assuming that a firmware update can raise the duration on the GFX100 to the same level as the “S” model.

The 50S has less attractive capabilities because it came out earlier and has an older image processor. It can record in Full HD up to 30p, a maximum of 30 minutes per clip and and a bitrate of 36Mbps. At least it has a mic input and headphone output like the 100 series.

It goes without saying that the GFX100 has the advantage of carrying two batteries at once thanks to its design. Two NP-T125 batteries have a rating of 800 shots per charge (combined).

Interestingly, the new GFX100s uses the same battery as the X-T4 APS-C camera, the NP-W235, and has a rating of 460 shots. So if we compare single batteries, the NP-W235 has a bit more juice than the NP-T125 but of course you can only put in one at the time, and there is no optional battery grip for the 100s.

The older GFX 50s uses the same battery as the big camera. There is only room for one but with the optional VG-GFX1 battery grip, it reaches the same 800 shots rating as the GFX100.

The two 100 models can be charged or powered with their USB C 3.2 port.

If you’re on a more restricted budget, there is a fourth option: the GFX 50R, which has the same technology found on the 50R but with simplified features such as a non-removable EVF on the left (rangefinder style), no top LCD, etc.

You can read all about the 50R and 50s in our dedicated article.

I’m wondering what the future of the GFX100 will be now that we have the 100s which is 40% cheaper with the same technology. Granted the former has a more robust body, the integrated vertical grip and more resolution for the EVF, but I suspect that for most people these characteristics will hardly justify paying 4000 extra.

The GFX100s is part of Fujifilm’s strategy to make medium format more accessible than ever before, and this camera represents a flagship model with a similar price as a flagship full frame camera (including the recent Sony A1). Certainly the system remains more expensive overall if we take into account the lenses, but it remains a step in the right direction. Fujifilm couldn’t have started the year in a better way in my opinion.

As for the GFX 50s, it obviously suffers in this comparison because it is older with an ageing sensor and processor. My guess is that it will be discontinued at some point and replaced by the 100s given the similar price, or perhaps it will be reduced in price and kept on the market for a little longer.

Check price of the GFX 50S on B&H Photo

Check price of the GFX100 on B&H Photo

Check price of the GFX100s on B&H Photo