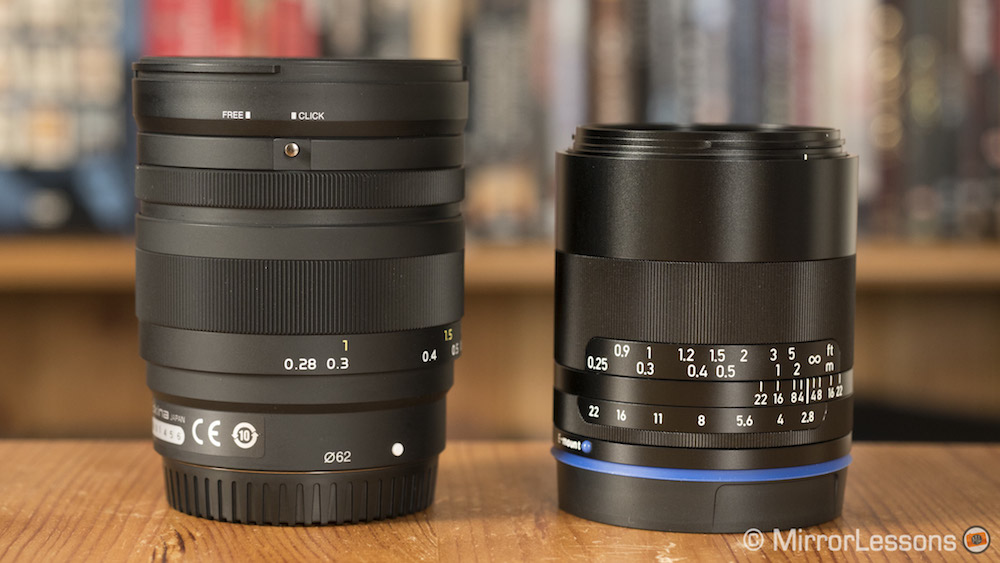 Back in early 2016, Mathieu spent two very enjoyable weeks in Wales and London using the Zeiss Loxia 21mm f/2.8, the company’s third manual focus E-mount lens. Just before we had to send the lens back, he said something that he doesn’t often say about the gear we test:

“If I stopped reviewing gear today, the Loxia 21mm is the first lens I’d want in my personal collection.”

Our positive experience with the Loxia was the main reason for our curiosity about the Tokina Firin 20mm f/2, which we first saw last year at Photokina. Despite having very similar fields of view, the Firin benefits from a marginally faster aperture and currently costs around $650 less than the Zeiss equivalent.

During the month of August, we finally had the chance to test the two lenses side by side. Below you can find the results, as well as the answer to the question: would the Loxia still be our number one choice?

Ethics statement: We were loaned the Tokina Firin 20mm and Zeiss Loxia 21mm for review purposes. We were not asked to write anything about the lenses, nor were we provided with any sort of compensation. Within the article, there are affiliate links. If you buy something after clicking the link, we will receive a small commission. To know more about our ethics, you can visit our full disclosure page. Thank you!

The Firin is a well-made product but we prefer the design of the Loxia for a couple of reasons.

First, the Loxia has been designed so that its diameter matches that of the Sony E-mount. It isn’t very long either – only about 72mm without the lens cap. Both aperture and focus rings are completely flush with the barrel, making it a very compact, elegant and streamlined product that suits both full-frame and APS-C bodies.

The Firin, on the other hand, is noticeably larger, taller and heavier than the Loxia. Indeed, I was surprised at how much more front-heavy our A7r II become with it mounted.

Second, although both are made of metal, the construction of the Loxia is superior. The distance scale and aperture markings are engraved (whereas on the Firin they are painted) and the operation of the ribbed rings can only be described as smooth and silky with excellent resistance.

This isn’t to say that the Firin doesn’t deliver a good user experience however. The focus ring is almost as pleasant to use as the Loxia’s and the aperture ring, while not as smooth in operation, turns in satisfying clicks. 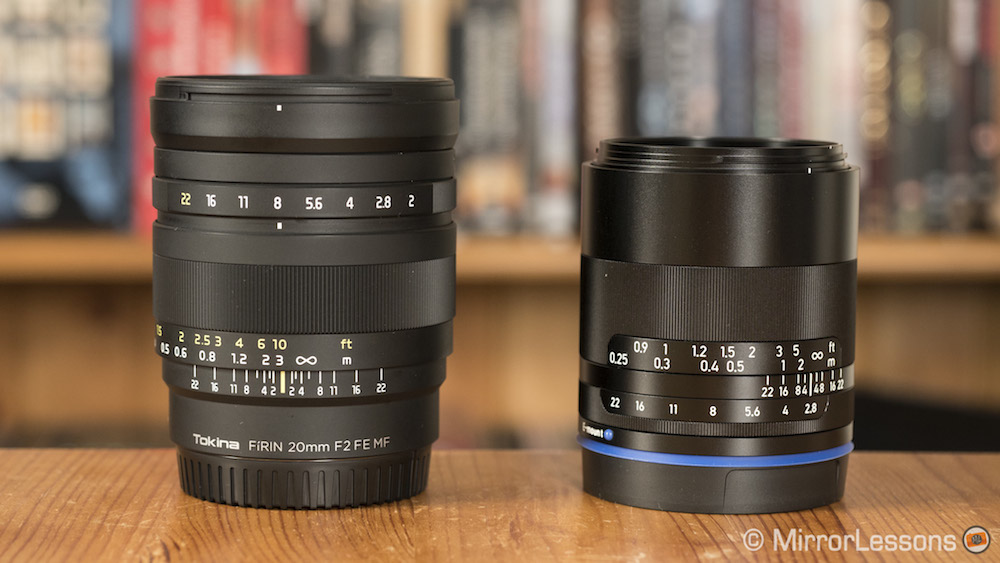 The only reservation I have concerning the design of the Loxia is that there is almost no space to grab onto when mounting or unmounting the lens due to the rings occupying most of the barrel. (A solution to this is to turn the focus ring until it stops, then turn the lens to mount it or unmount it.) Also, because the rings are located in such close proximity, it can sometimes be difficult to twist one without inadvertently turning the other.

Both products focus internally and feature electronic contacts on the mount, which allows not only for the transfer of EXIF data to the camera but also the activation of focus magnification while turning the focus ring. 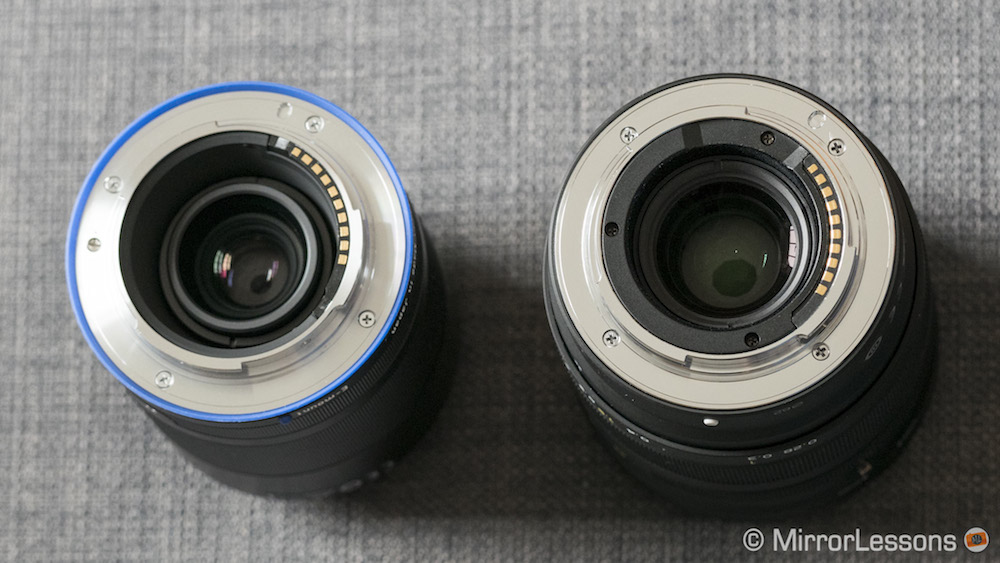 They also share an aperture ring that can be de-clicked, albeit in different ways.

The Firin is more straightforward in that its aperture ring can be switched between “free” and “click” by twisting the black ring near the front element. To release the ring, all you have to do is press and hold a small metal button.

To do the same with the Loxia, you need to turn the small screw on the lens mount with the provided tool. It isn’t the most convenient solution as it requires you to unmount the lens whenever you want to change the setting. What’s more, you must always remember to bring the tool (or a small flat screwdriver) with you.

The Firin doesn’t feature any sort of weather sealing whereas the Loxia comes with a rubber gasket around the mount that prevents dust and water from getting in.

Both feature a lens coating (multi-layer on the Firin and Zeiss T* Anti-Reflective Coating on the Loxia) to reduce flare and ghosting. 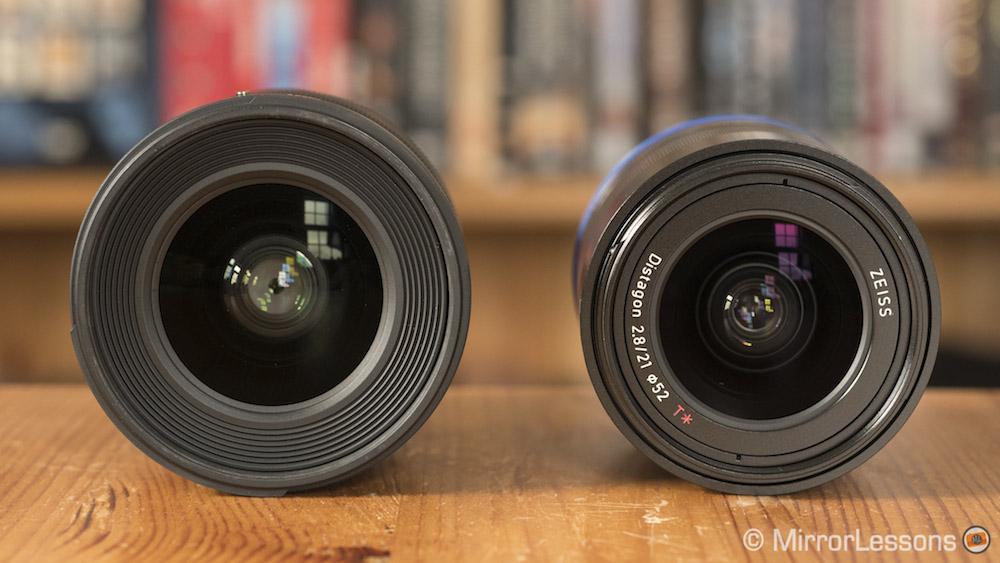 The Loxia is packaged with a petal-shaped metal hood whereas the Firin comes with a rectangular plastic hood. I’m not a big fan of the design of the Firin’s hood because it doesn’t leave much space to remove and attach the clip-on lens cap. Also, unlike the Loxia’s hood, it cannot be reversed over the lens barrel when not in use.

If we look at a series of 100% crops taken at a focus distance close to infinity, it is immediately obvious that the Firin and Loxia perform in a very similar manner at all aperture values at the centre.

Between f/2.8 and f/4, I would have trouble telling one from the other if I didn’t have the EXIF data in front of me. Surprisingly f/2 is practically identical to f/2.8 on both lenses at this distance.

From f/5.6 onward, the Firin seems to take a small lead but you need to zoom in to 100% to see the difference.

Diffraction begins to show at f/8 on both lenses and becomes more invasive as you stop down. f/22 is the only value I’d avoid due to it being much softer than the rest.

In the corners, the differences between the two lenses start to reveal themselves.

From their fastest apertures up to f/5.6, the Loxia is consistently sharper than the Tokina whereas from f/11 onwards, their performance is almost identical. The only value at which the Tokina outperforms the Loxia by a small margin is f/8.

The Loxia’s corner performance peaks between f/4 and f/5.6 while the Tokina is the sharpest at f/8.

Sharpness at a close focus distance is similar to that at a long distance in that all apertures from f/2.8 to f/11 look almost identical. The only difference is that the Firin at f/2 is a visibly softer than either lens set to f/2.8.

Both are much softer at f/16 and f/22 but I would say the Firin retains a little more sharpness than the Zeiss lens, especially at f/22.

Bokeh probably isn’t a primary concern for those interested in buying the ultra-wide Firin or Loxia, but it is nice to know that if you focus close to your subject and use the fastest apertures, you can achieve a fairly nice background or foreground blur.

Overall the quality of their bokeh is quite similar: it isn’t at all busy or distracting. The specular highlights of the Firin are round and display a little more fringing around the edges whereas the Loxia’s take on the shape of the 10-blade aperture.

The Loxia has a closer minimum focus distance than the Firin: 25cm versus 28cm to be precise. You can see the difference this makes by comparing the two images below.

The best fix, as always, is to import your RAW file into a post-processing software such as Lightroom and use the Remove Chromatic Aberration tool.

With electronic compensation activated, vignetting is only an issue at the fastest apertures: f/2 and f/2.8 on the Tokina and f/2.8 on the Loxia. This can once again be corrected in post-production, either manually or by applying the dedicated lens profile in the case of the Loxia.

Both lenses display some mustache distortion which is a combination of barrel and pincushion distortion.

The fix for the Loxia is simple: all you need to do is activate the dedicated lens profile in Lightroom.

Since the Firin doesn’t have a profile (as of September 2017), your best option is to play with the distortion slider under Manual in Lightroom if you feel the image needs adjusting. Fingers crossed that they will release a dedicated profile soon! 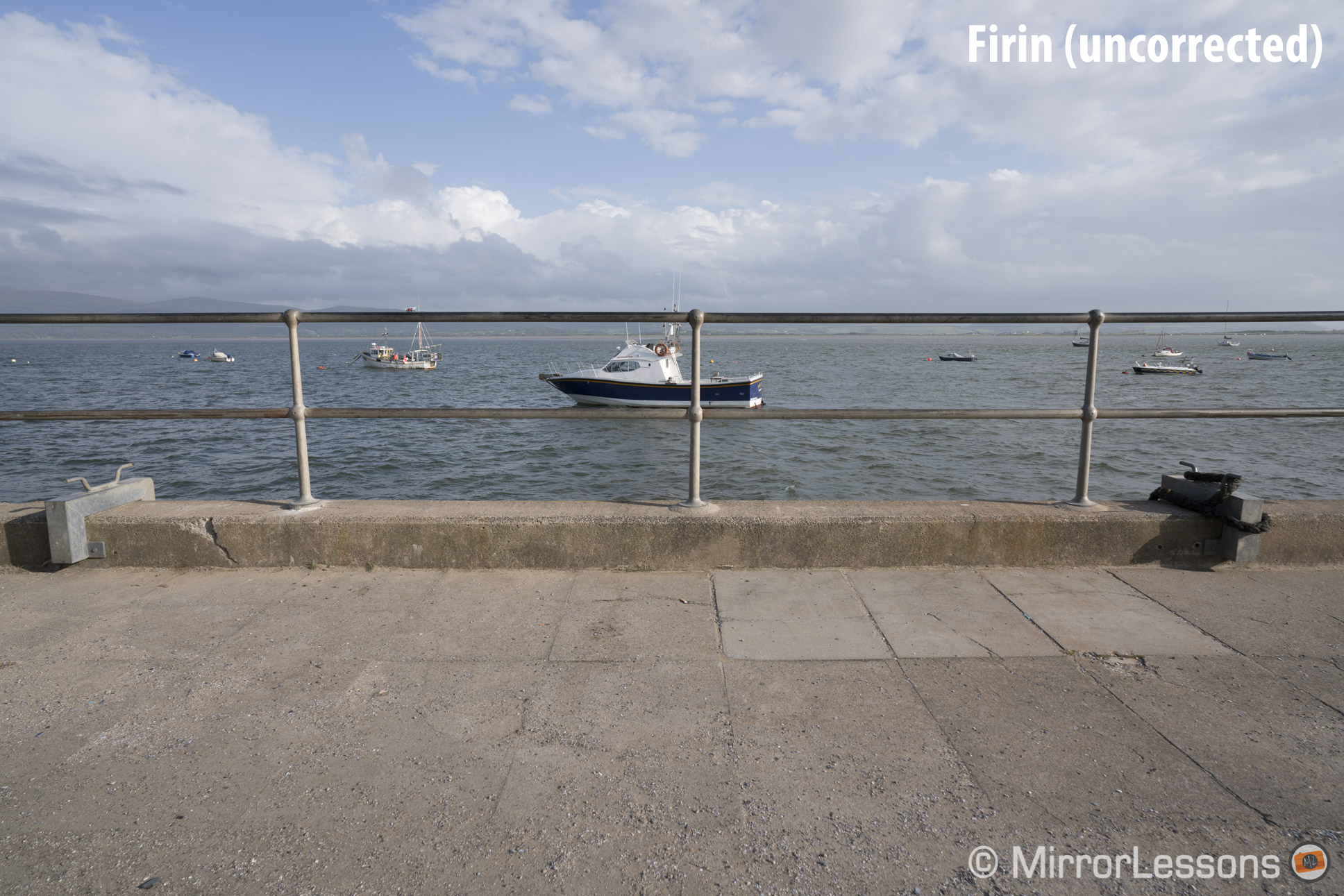 Between the two, the Firin suffers more from flare and ghosting than the Loxia. When shooting into direct sunlight, you may encounter some green flares with the Firin whereas the Loxia very rarely produces any flare except at the smallest apertures, which is evidence of how well the Zeiss T* coating works.

Both lenses are capable of producing nice sunstar flares at the smaller apertures, though I find that of the Loxia a little more attractive and well defined.

When set to the same white balance, we noticed that the Tokina lens produces an ever so slightly cooler tint than the Zeiss but this can of course be adjusted in post production with the RAW files.

The focal lengths of the Firin 20mm and Loxia 21mm differ by a mere millimetre, which makes hardly any difference at all in real-world shooting terms.

When used on an APS-C body, the Firin becomes a 30mm equivalent and the Loxia becomes a 31.5mm equivalent, which, once again, is an insignificant difference.

Since the Firin and the Loxia both have relatively fast maximum apertures, either would be suitable for astrophotography. That said, I would probably choose the Loxia over the Firin because it has better corner sharpness at the fastest apertures as we already saw above. You may notice some astigmatism (especially with the Firin) and chromatic aberration around the points of light but overall both lenses offer very good performance for this genre.

Both lenses provide a good manual focusing experience, which should come as no surprise.

As stated in the design section, both are smooth and provide good resistance but the Loxia is just that little bit nicer to use.

To travel from infinity to the minimum focus distance, a quick 1/4 turn (90°) is required with the Loxia whereas close to a half turn (130°) is necessary with the Firin.

The fact that the Loxia has such a short throw is both an advantage and disadvantage. On one hand, it takes less time to travel from one extreme to the other but by the same token, you may find it difficult to bring your subject into perfect focus because so little movement of the focus ring is required to change distances. This is certainly less of an issue with the Firin because of its longer throw.

We started this comparison by asking the question: would we still go for the Zeiss Loxia 21mm now that a less expensive option like the Tokina Firin 20mm exists?

The answer to this is: it would ultimately depend on the budget we had at our disposal. The Tokina is around half the price of the Loxia but it isn’t as sharp in the corners up to f/5.6 and is less resistant to flare. Also the build quality, while excellent, doesn’t quite match the premium construction and compact design of the Zeiss lens either.

To be fair to the Firin, though, it really is a bargain for the price you pay. We love the fast f/2 aperture for low-light work and astrophotography, and the ability to quickly switch between a free and clicking aperture without a special tool is a boon for those who like shooting stills and video.

All things considered, we would probably still choose the Loxia over the Firin but it is nice to know that a much more affordable alternative exists that doesn’t force you to make too many compromises!

Choose the Tokina Firin 20mm if you:

Choose the Zeiss Loxia 21mm if you: