Earlier this year, Canon announced its first full-frame mirrorless camera, the EOS R, whose new RF mount features a large 54mm diameter and a shorter flange distance than the EF DSLR mount. According to Canon, this mount will allow for “faster and lighter lenses with higher performing optics” than ever before.

Ethics statement: We borrowed these three lenses to conduct our comparison on the Canon EOS R. We were not asked to write anything about these products, nor were we provided with any sort of compensation. Within the article, there are affiliate links. If you buy something after clicking the link, we will receive a small commission. To know more about our ethics, you can visit our full disclosure page. Thank you! 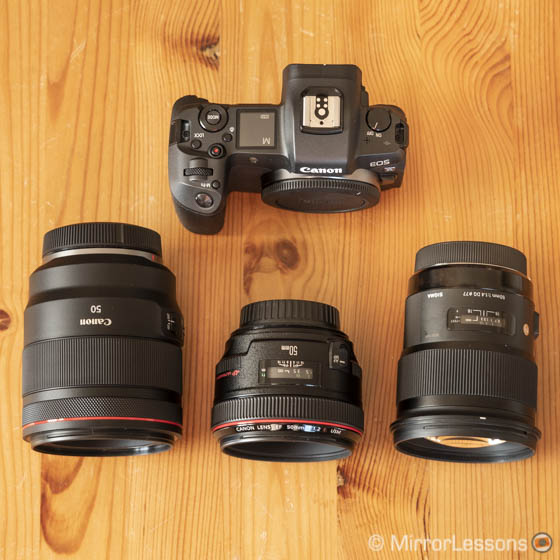 In terms of their construction, all three lenses feel solid and heavy in the hand. Even the EF 50mm 1.2, which is the smallest of the three, can weigh down the EOS R when the adapter is attached. The RF lens features a matte finish, the EF 50mm 1.2 has a rugged plastic exterior, and the Sigma is mostly made of metal. 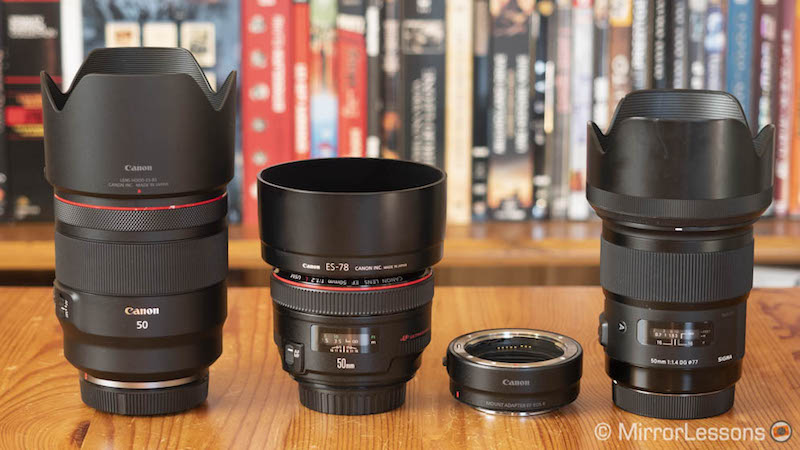 All three sport a rubberised focus ring but only the RF lens has an extra control ring at the end of the lens to which you can assign various settings such as aperture, shutter, ISO and white balance. Its knurled surface makes it easy to differentiate from the rest of the barrel’s surface. Note that if you want to de-click it for video use, you must send it to a Canon service centre. 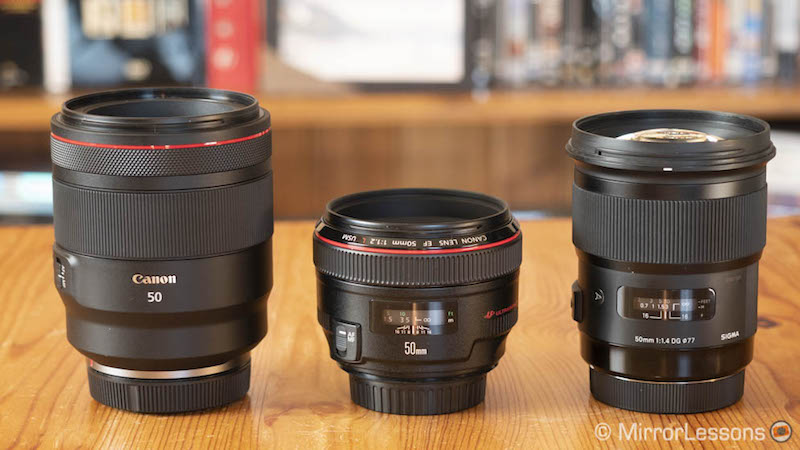 Of the three, there is no question that the new RF lens has the best build quality. Being a member of the Canon L-series, it has a weather-resistant design that protects against dust and moisture. Around the mount there is also a plastic ring that seals the gap between the lens and the camera body.

The EF 50mm 1.2 is also an L-series lens but in order to have adequate weather-resistance, Canon states that you must attach a 72mm filter (sold separately). This is because the front element moves when focusing.

Unlike the two Canon lenses, the Sigma doesn’t feature any sort of weather-resistance, so you’ll want to be careful when using the lens in inclement conditions. 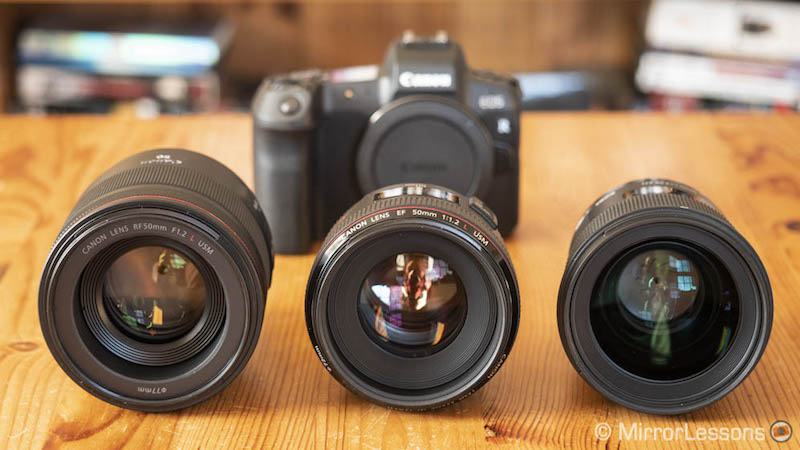 On the side of the barrel of each lens, there is a switch to jump between AF and MF. The RF lens also has an additional switch to limit the focus distance. 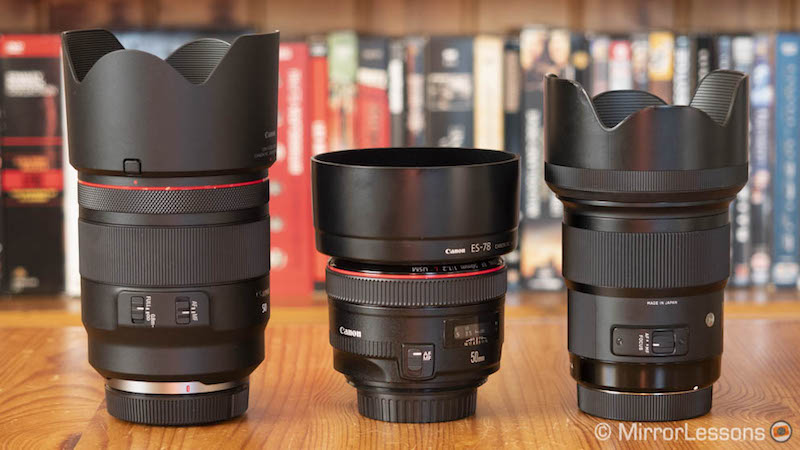 All three have plastic hoods, which are petal-shaped for the RF lens and the Sigma and cylindrical for the EF lens. Each comes with its own clip-on lens cap. 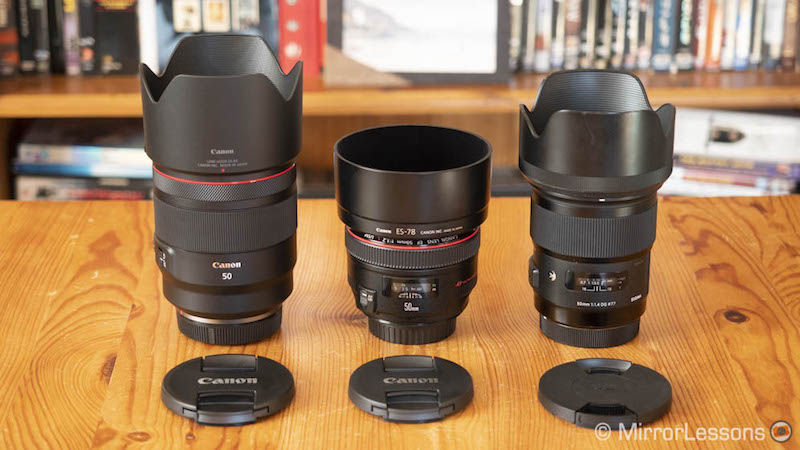 Sharpness is one of the aspects photographers care about the most, so let’s take a look at how these three primes compare.

At a long focus distance at the centre, the three lenses look extremely similar through the aperture range. From f/1.8, the RF lens looks ever so slightly sharper than the other two primes but the differences are hardly worth mentioning. The best results can be found between f/1.8 and f/5.6 and diffraction is only noticeable at f/16. 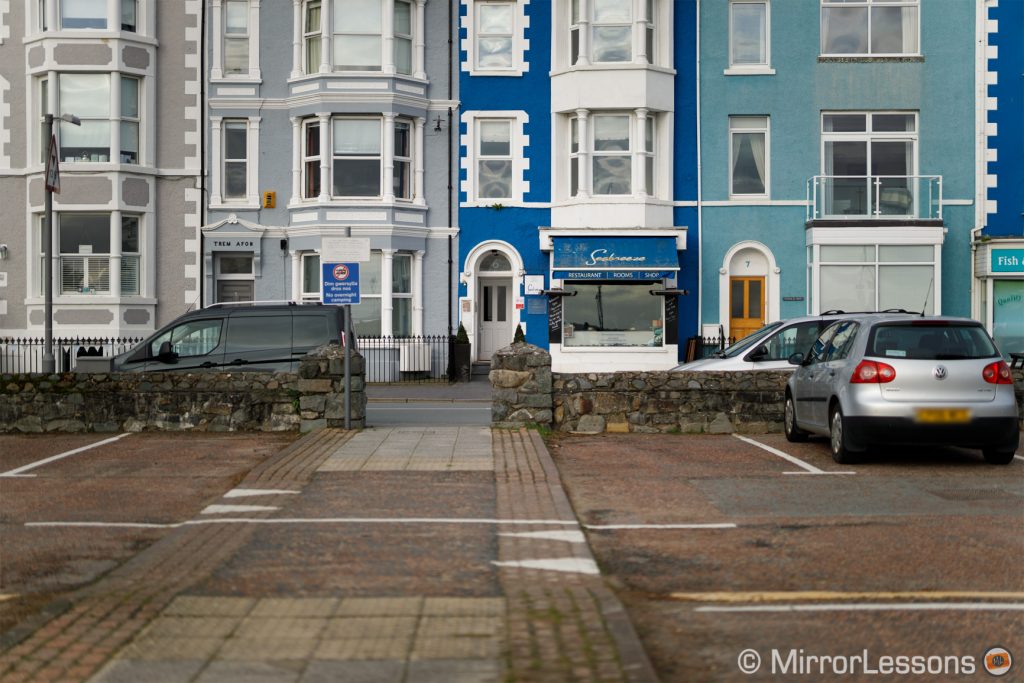 It’s only by turning to the corners that we start to see a few differences emerge.

The RF lens maintains a slight advantage over the Sigma at f/2.8 and f/4, and although the EF lens looks a little sharper at these values, it doesn’t come close to either of its rivals.

Between f/5.6 and f/11, you can hardly tell the difference between the RF lens and the Sigma. The EF is at its sharpest at these values but once again, it remains the softest of the three.

In the case of all three lenses, the best results can be found between f/5.6 and f/11.

But what about sharpness at a closer focus distance? Here again, it becomes clear that the RF 50mm is the superior lens.

When set to their respective fastest apertures, the RF lens is the sharpest, followed by the Sigma and finally the EF lens. As you can see, the level of detail rendered by the RF lens is quite incredible. 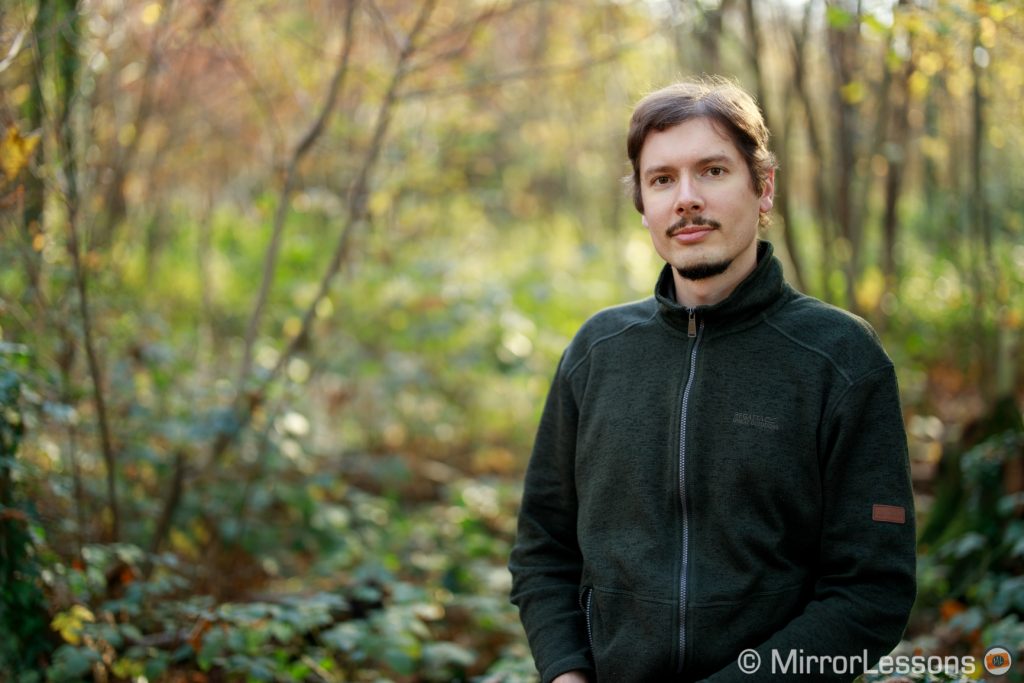 The same trend emerges even at f/1.8.

At f/2.8, the Sigma isn’t far behind the RF lens whereas the EF lens is still much softer.

In summary, the RF 50mm is the sharpest of the three but its supremacy only becomes obvious in images shot at close range or in the corners. It is followed closely by the Sigma whose results are extremely good, especially if you consider that it is less expensive than the RF lens (by a long shot) and the EF lens (by approximately $400). The EF lens is the softest of the three in the corners and at a close focus distance.

Optical quality: Bokeh and other characteristics

Bokeh and depth of field

Anyone who owns a fast-aperture lens is going to be curious about the quality of the ‘bokeh’ or background blur. In the case of these three primes, the differences aren’t as big as I would have expected. When set to their fastest apertures, the RF lens appears to be the creamiest at the centre but only by a very small margin.

At f/2.8, you can clearly see the shape of the bokeh balls emerge.

In the corners, the RF lens definitely looks smoother than the EF lens, whose bokeh is ravaged by streaky lines. Overall the Sigma’s bokeh looks more similar to that of the RF lens but it too displays a few streaks.

With the EF and RF lenses, you can achieve a little more shallow depth of field than with the Sigma lens due to their slightly faster aperture of f/1.2 but the differences are minimal.

Comparing the three lenses side-by-side, the EF lens is the one that displays the most visible barrel distortion, but to be fair, it is quite contained. The RF and Art lenses show very little by comparison. Distortion can easily be corrected by applying the dedicated lens profile* in Lightroom or by activating Distortion Control in the EOS R menu for the SOOC JPGs.

As for vignetting, it is present at the fastest aperture of all three lenses and persists until f/4 (RF lens), f/5.6 (EF lens) and f/4 (Sigma). Once again, you can correct vignetting in post-production by doing any of the following: a) applying the lens profile, b) using the vignetting slider to make manual adjustments, or c) enabling the in-camera corrections in the Peripheral Illum. Corr. menu for the SOOC JPGs.

*If you plan to use the RAW files, keep in mind that there currently isn’t a lens profile available for the RF 50mm 1.2 in Lightroom. This matters less for distortion since there is hardly any to correct but you may have to manually adjust the strength of the vignette to suit your taste.

All three lenses are prone to flare if you shoot into direct sunlight, with the EF lens and the Sigma producing more pronounced examples than the RF lens. I actively searched for flare in the image samples below but for everyday shooting, you won’t find it an issue.

At the fastest apertures, the EF lens displays the worst chromatic aberration of the three in the form of severe purple fringing. There are traces of green and purple fringing from the RF and Sigma lenses but it isn’t nearly as evident.

Once you stop down to f/2.8, the results improve to the point that you can barely see any traces in images taken with the RF lens. The Sigma continues to display a small amount, whereas with the EF lens, it doesn’t disappear completely until f/5.6.

As always, you can remove chromatic aberration in your favourite post-processing software. In Adobe Lightroom, for example, there is a dedicated tool that does an excellent job of removing all traces of fringing. For the SOOC JPGs, you can also enable the Chromatic Aberr. Corr. option in the Digital Lens Optimiser sub-menu.

I was pleasantly surprised by how quick all three lenses are on the EOS R body in all light conditions. Indeed the adapted lenses are just as snappy as the native RF lens for stills and video shooting. However none of them are completely silent. You can clearly hear the AF motor at work when using the RF and EF lenses, and the Sigma produces a faint rattling sound. Of the three, I’d say the Sigma is the quietest.

Whereas the Sigma and EF lenses are mechanical in nature, the RF lens employs focus-by-wire which uses a motor to drive the manual focus. Benefits of this mechanism include being able to vary the ring’s rotation speed/sensitivity and customise the direction of the ring.

The focus rings of the Sigma and EF lens are somewhat stiffer than that of the RF lens but all three are pleasant and accurate to use. Because the Sigma and RF lens have wider focus rings, they are a little easier to turn than the thin ring of the EF lens.

For video, you may find the two DSLR lenses more practical because they offer a precise distance scale on the barrel whereas with the RF lens, you must refer to the distance scale on-screen. However none of them offer hard stops.

Even if you’ve only skimmed through this comparison, it should be quite clear which of the three 50mm primes reigns supreme. With its extraordinary sharpness across the frame at all apertures and beautiful bokeh, the new Canon RF 50mm 1.2 is the kind of lens for which portrait or wedding photographers would literally switch camera systems.

This kind of optical quality doesn’t come cheap however. With a launch price of approximately $2300 US, it is exactly the same price as the new EOS R body. I think many photographers would agree that this is a lot to spend on one lens when there are perfectly valid alternatives out there that won’t break the bank.

A good example is the Sigma 50mm 1.4 Art, which is a third of the price of the RF lens. Although it is half of a stop slower and doesn’t offer quite the same level of edge-to-edge sharpness, it can still produce very satisfying results even at the fastest apertures.

Personally I believe the RF lens only makes sense if you feel you’ll get a significant “return” on the investment, be that the intangible satisfaction with the images you create (an emotional return) or the money you make as a result of professional work (a tangible financial return). Otherwise you might as well go with something less expensive and use your remaining budget to invest in additional equipment.

As for the EF version of the 50mm 1.2, I cannot help but feel it is beginning to show its age. It is inferior to both the RF lens and the Sigma in almost every way, yet costs more than the latter.