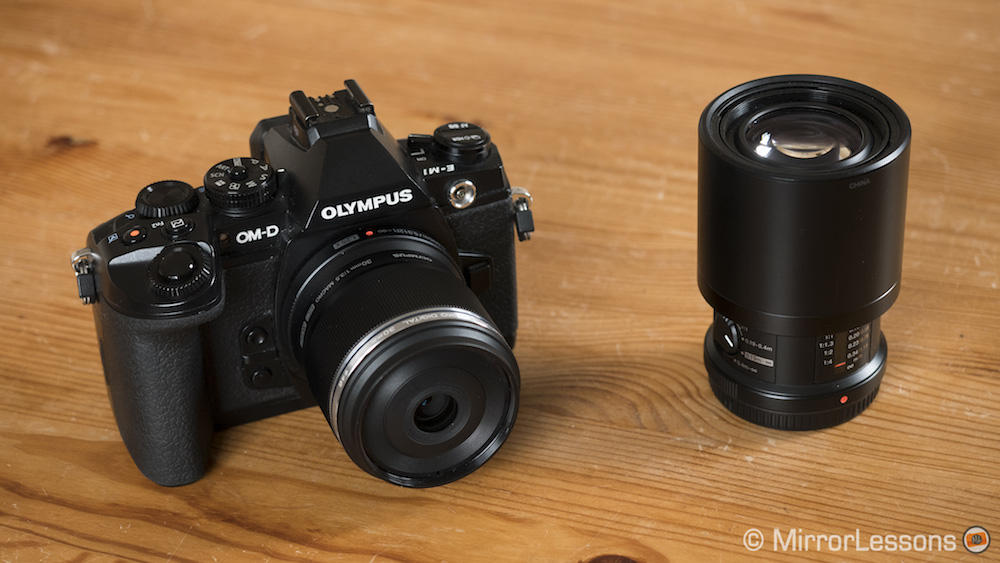 The Olympus M.Zuiko 60mm f/2.8 was one of the very first lenses we bought after purchasing the OM-D E-M5 back in 2013. Before then, I’d been using the 14-42mm kit lens for all my macro photography, which was sufficient for casual use but not enough to capture minute details. Even to this day, the 60mm remains one of my favourite lenses thanks to its small and lightweight construction, excellent sharpness, external controls and focal length.

At Photokina 2016, nearly four years after the release of the 60mm, Olympus announced its second macro lens, the M.Zuiko 30mm f/3.5. Although both are specifically designed for macro work, they fulfil a different set of needs as we will discover in the following comparison. Let’s get started!

Ethics statement: We purchased the M.Zuiko 60mm f/2.8 for our own personal use, while the M.Zuiko 30mm f/3.5 was loaned to us for review. We were not asked to write anything about these lenses, nor were we provided any other compensation of any kind. Within the article, there are affiliate links. If you buy something after clicking the link, we will receive a small commission. To know more about our ethics, you can visit our full disclosure page. Thank you!

Both the 30mm and 60mm are macro prime lenses for the Micro Four Thirds system. Though both are very light and compact and match the size of all Micro Four Thirds bodies, the 60mm is longer and heavier than the 30mm. The diameter, on the other hand, is almost identical, which explains the same filter diameter of 46mm.

Both barrels are made of high quality plastic and feature a solid metal mount. However, only the 60mm is dust and splash proof, so while a few raindrops won’t hurt the 30mm, it is better to protect it in inclement conditions.

A feature both lenses share is a large ribbed fly-by-wire focus ring that is comfortable to use and precise. To go from infinity to the closest focus distance and vice versa requires quite a few turns, however, which is why the focus limiter switch and distance scale of the 60mm are so handy. Not only can you set a specific range outside of which the lens won’t focus, but you can also jump from a close focus distance to a far one and back again in seconds. With the 30mm, your only option is to twist the focus ring until you reach your desired distance.

Another advantage of the 60mm is its LH-49 lens hood (sold separately on B&H Photo) which slides down to retract when not in use. This sliding mechanism also allows the lens hood to remain on the lens at all times though it blocks the focus ring when retracted. Unfortunately, there isn’t a dedicated lens hood for the 30mm as of yet, so you’ll have to take extra care not to knock the front element and keep an eye out for flare and ghosting in your images.

Speaking of the front element, you’ll notice that the 30mm’s is much smaller and as such, a little less vulnerable to flying debris than the 60mm.

So, how does the sharpness of the 60mm and 30mm compare? Since they are both macro lenses, I will be concentrating on their performance at a close distance using a similar composition.

At their respective fastest apertures – 2.8 on the 60mm and 3.5 on the 30mm – the 30mm appears a little softer than the 60mm but the difference is negligible. 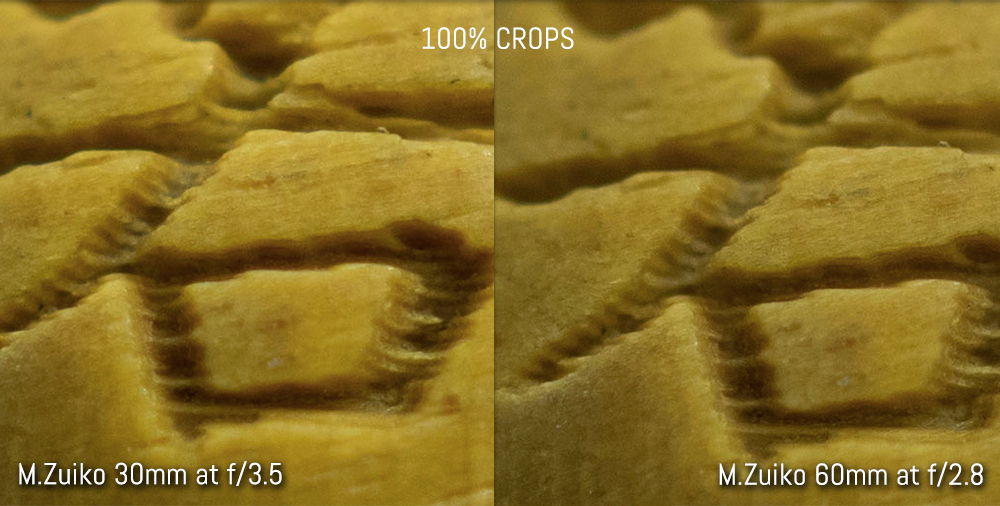 At f/4, the 60mm becomes even sharper and does a better job of extracting the fine details in the grain of the wooden bracelet. The 30mm isn’t far behind, however. 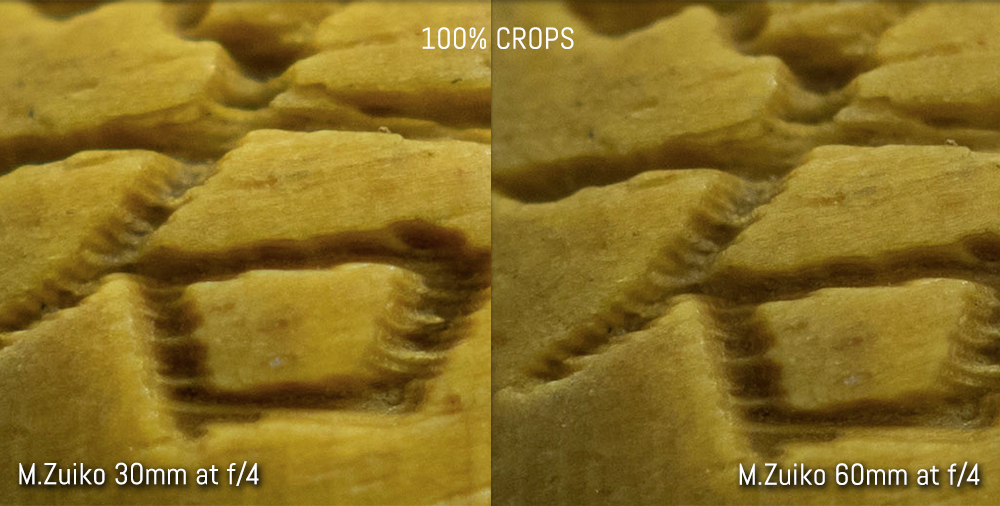 By f/5.6 and f/8, the performance of the two lenses is almost identical. 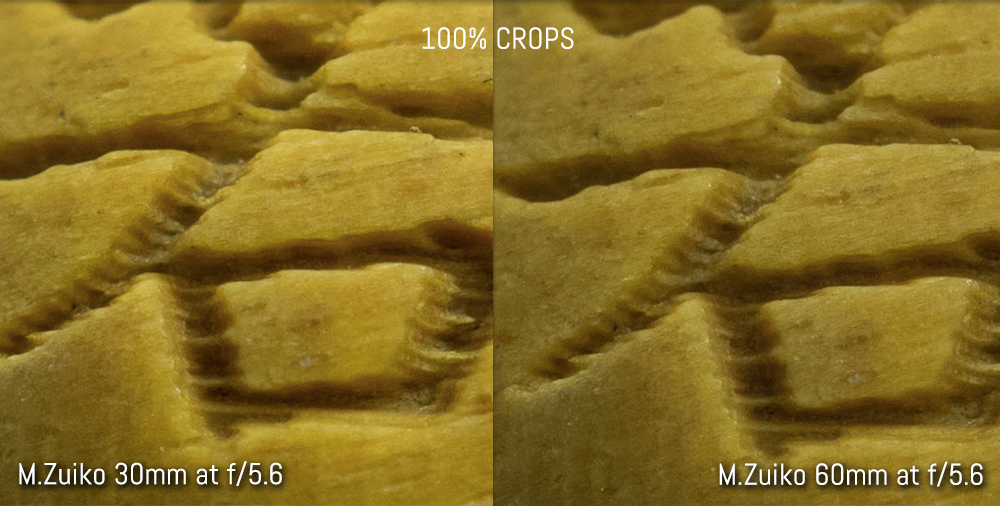 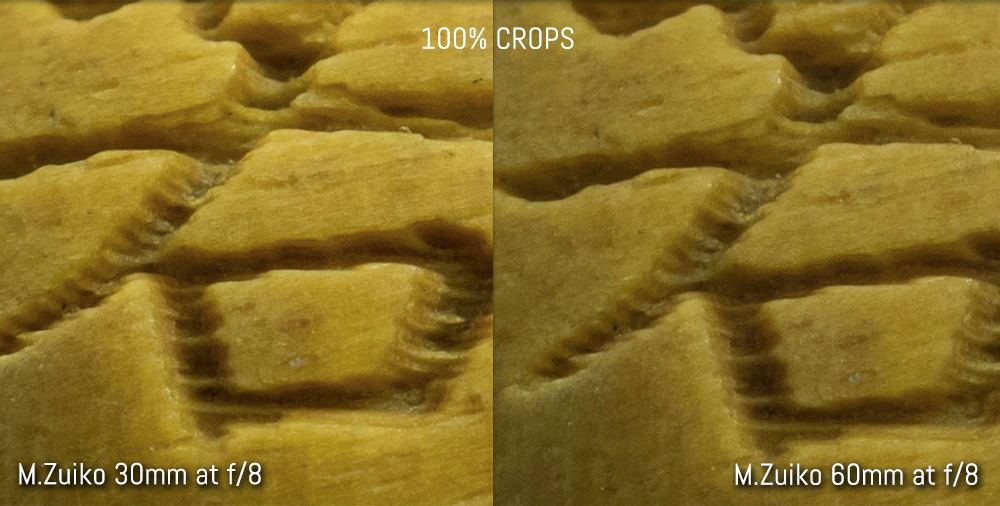 Though both lenses begin to suffer from diffraction from f/11 onwards, it is interesting to note that the 30mm seems to retain better sharpness overall at these slower values. This can only be good news for 30mm owners since macro photography requires a deep depth of field to bring as much of the subject into focus as possible. 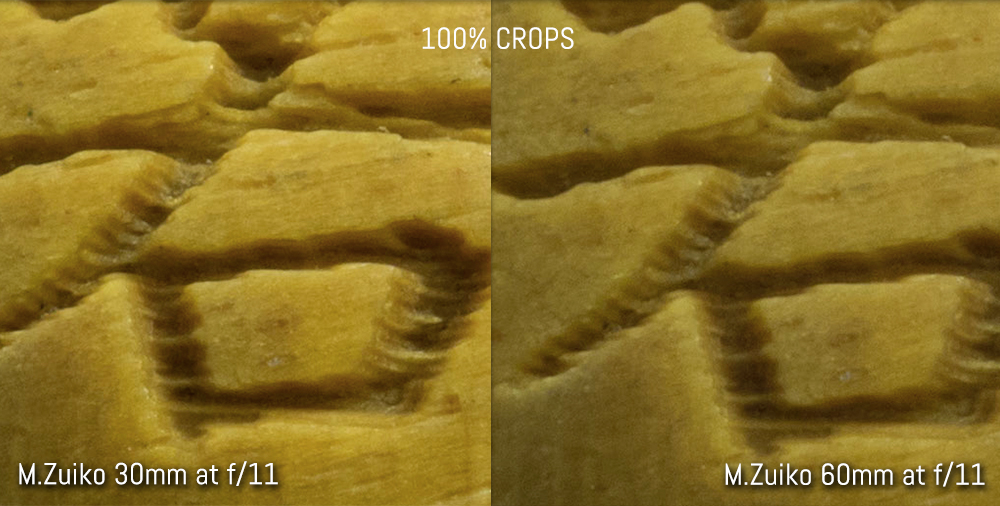 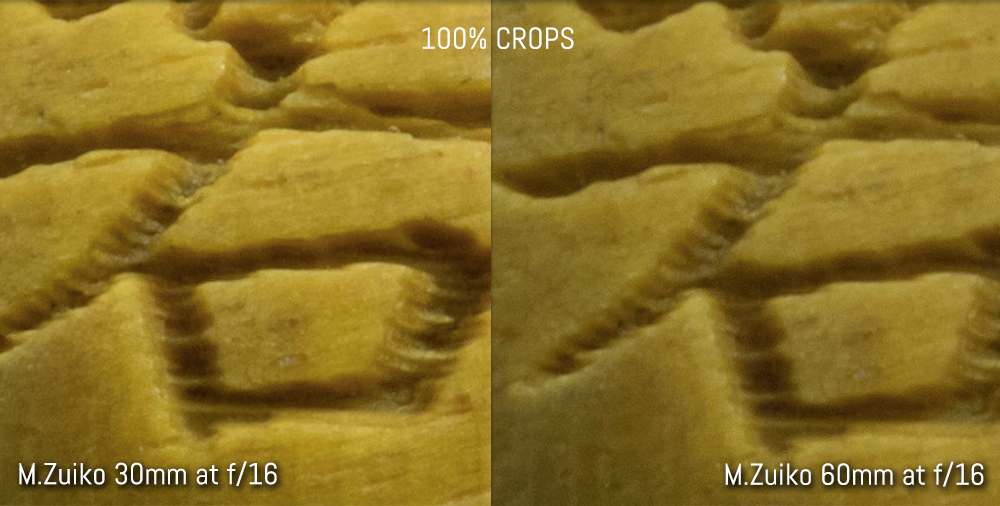 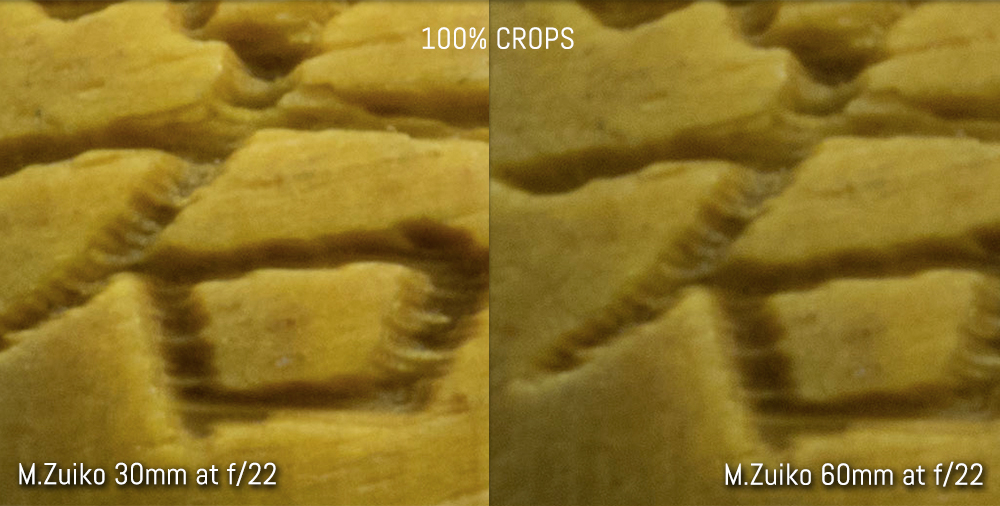 The out-of-focus rendering, or bokeh, of both lenses is very pleasant with smooth transitions and uniform specular highlights. Since the 60mm is twice as long as the 30mm and has a slightly faster maximum aperture, you can generally achieve a creamer background and more subject separation with the same composition. However, the 30mm has the advantage of a closer focusing distance (9.5cm versus 19cm) and a higher magnification (1.25x versus 1x).

Below you can see a comparison of the out-of-focus rendering with a similar composition.

Image distortion isn’t an issue on either lens, while corner shading (vignetting) is present at f/2.8 on the 60mm and up to f/5.6 on the 30mm.

The 30mm suffers more from chromatic aberration at the fastest apertures (f/3.5 and f/4) than the 60mm, though it disappears by f/5.6 on both lenses.

Flare generally won’t present an issue for macro photography as you’ll rarely be shooting directly into the sun, but if you decide to use these two lenses for other purposes such as landscape, street or portrait work, it can appear in the form of a polygonal shapes, streaks of light, or purple flare of varying intensities depending on the angle at which you are shooting.

It goes without saying that the long lens hood of the 60mm does an excellent job of mitigating flare and ghosting.

The minimum focus distance, magnification and focal length are the main characteristics that distinguish these two lenses from each other.

Between the two, the 60mm is more well-suited to a variety of subjects. The minimum focus distance of 19cm, combined with the 1:1 magnification ratio and 60mm focal length (120mm in 35mm terms) make it the perfect all-purpose macro solution for both animate and inanimate subjects because you can achieve a good level of magnification without getting so close that you’d risk scaring off the subject.

What’s more, it can even double up as a casual portrait lens thanks to its focal length, excellent sharpness and 2.8 aperture.

The 30mm is certainly the more specialised product. Its minimum focus distance of just 9.5cm is so short that the lens almost touches the subject, which can easily cast a shadow or scare off skittish living creatures. For this reason, it is best used on inanimate (or fearless!) subjects with an off-camera flash unit or ring flash.

Below you can see an example of the distance required to fill the screen with a butterfly about the size of a Red Admiral. With the 30mm, you might easily frighten the butterfly due to your proximity, while with the 60mm, the risk is reduced.

Focusing at the minimum distance with either lens can also produce a razor-thin depth of field, even at smaller apertures such as f/8 or f/11. This can be overcome by using Olympus’ Focus Stacking and Bracketing functions, which let you take multiple images at different focus distances in a burst and merge them either in camera (Stacking) or later on in post-production (Bracketing). The latest Panasonic Lumix cameras have a similar function called Focus Bracket which works in a similar way to Focus Bracketing on Olympus cameras. Note that to use Focus Stacking with the 30mm on the OM-D E-M1, you will have to download firmware version 4.2.

Update: the firmware has been removed from the Olympus website due to a major bug.

Like the vast majority of M.Zuiko lenses, both the 30mm and 60mm are very fast, accurate and silent for still photography in both S-AF and C-AF modes, and the speed and accuracy only deteriorate a little in poor light conditions. For video with C-AF activated, however, it isn’t uncommon for either lens to take a long time to lock onto the subject or to hunt back and forth for the correct focus point, especially on Panasonic Lumix bodies.

Since the 30mm and 60mm are macro lenses, you’ll actually have the most luck using them in manual focus mode and moving your body/tripod back and forth to home in on the correct focus point.

The M.Zuiko 30mm and 60mm are both excellent products whose design, optical quality and performance are all in accordance with the ethos of the Micro Four Thirds system with a reasonable price tag to boot. However, there are a couple of clear advantages that come with owning the 60mm.

First is the focus limiter switch on the barrel with which you can easily select the appropriate focus distance in seconds. Being able to focus quickly can make the difference between success and failure; between getting the shot of that skittish insect before it flies off and going home empty-handed.

Second is the lens hood whose innovative design allows you to retract it over the lens barrel when not being utilised. When extended to its full length, it is long enough to protect the front element from damage while mitigating flare and ghosting.

Finally, there is the advantage of dust and moisture resistance. Given that many recent Micro Four Thirds bodies are also weather-sealed, you have the green light to shoot in varied conditions, including rain and snow.

Where the 30mm shines is at its closest focus distance which gives you an impressive magnification of 1.25x. However, since you have to get extremely close to your subject – so close, in fact, that the lens almost touches it – it is more appropriate for still life than living things.